It is convenient to use sets of form to prepare more than one copy of a document.

It is convenient to use sets of form to prepare more than one copy of a document. In this way, multiple copies can be made by a single writing method. The sets of forms can be constructed in the following ways:

1. Loose Sheets Put into Sets Method: Under this method the office typist or clerk assembles the forms and carbon paper into place before typing or writing. The method is simple and hence used quite commonly. It has certain drawbacks 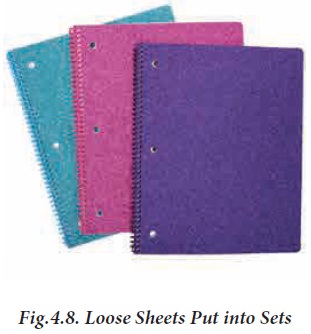 2. Single Sheet Perforated and Folded Method: Duplicate or triplicate form sets can be made by folding perforating or scoring single sheet of paper.

3. Sets in Gang Method: The term ‘gang’ means that a group of two or more identical forms are printed on a single sheet and are separated by perforations. These gang sheets may be in loose form but are often bound into pads or assembled and glued into unit sets. All the sheets may be assembled and perforated into gangs, or the record copies may not perforated and may be used as a register. 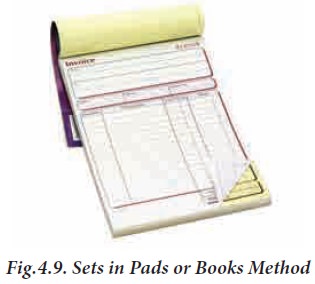 4. Sets in Pads or Books Method: Quit often forms of the same type or different forms comprising a set are padded in such a way that all the copies are perfectly aligned.

5. Unit Sets: Under this method variable lengths and breadths of the respective sheets in the set are used. This method of form set construction is economical where the quantity used is small and continuous forms happen to be costly. Unit sets can be constructed in two ways: (a) Unit blocked sets (b) Snap sets method.

6. Continuous Sets or Continuous Stationery: The time taken by the typist for putting the forms on the typewriter is long. To eliminate this, continuous stationery is used. Several copies are obtained by the use of copying methods without going through the process of tearing off forms and inserting carbon paper. It may be defined as a device whereby office forms are produced in a continuous strip and separate forms are divided from one another by perforations. 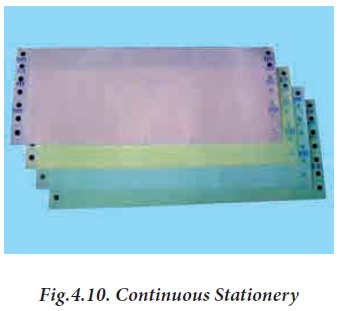 Diﬀerent Types of Continuous Stationery: There are three basic types of continuous stationery which can be adopted when forms are designed and produced. They are: 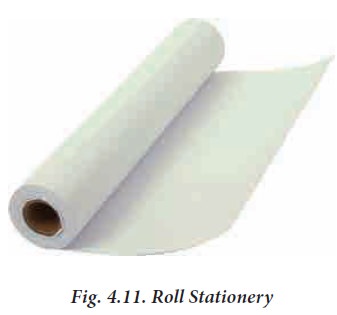 i. Roll Stationery: In this type, the form is continuous roll. There are no perforations and the torn against a metal cutting edge when message have roll is inter-leaved with a single carbon paper used in tele printers, telex etc.,

ii. Interfold Stationery: In this type of stationery perforated and the stationery is inter-leaved and form fashion. This is also called as “Flat”. 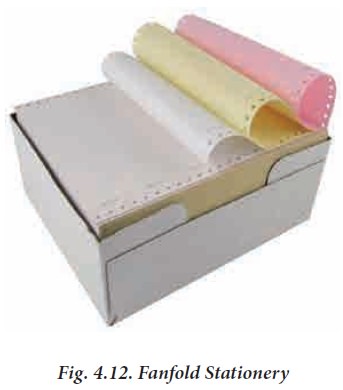 (i) It saves the time of the typist by avoiding boring and difficult task of assembling various forms to construct a form set.

(ii) It facilitates the speedy use of all machines.

(iii) It brings about efficiency in office operations because of considerable savings in time by eliminating various operations.

iv.                  Where several forms are interleaved with carbon papers they tend to get out of alignment and in certain forms like invoices, figures may be typed in wrong places.