Observation of Day of Deliverance

The Second World War broke out in 1939 and the Viceroy of India Linlithgow immediately announced that India was also at war.

Observation of Day of Deliverance

The Second World War broke out in 1939 and the Viceroy of India Linlithgow immediately announced that India was also at war. Since the declaration was made without any consultation with the Congress, it was greatly resented by it. The Congress Working Committee decided that all Congress ministries in the provinces would resign. After the resignation of Congress ministries, the provincial governors suspended the legislatures and took charge of the provincial administration.

The Muslim League celebrated the end of Congress rule as a day of deliverance on 22 December 1939. On that day, the League passed resolutions in various places against Congress for its alleged atrocities against Muslims. The demonstration of Nationalist Muslims was dubbed as anti-Islamic and denigrated. It was in this atmosphere that the League passed its resolution on 26 March 1940 in Lahore demanding a separate nation for Muslims.

Though the idea of Pakistan came from the Muslim League platform in 1940 it had been conceived ten years earlier by the poet–scholar Mohammad Iqbal. At the League’s annual conference at Allahabad (1930), Iqbal expressed his wish to see a consolidated North-west Indian Muslim State. It was then articulated forcefully by Rahmat Ali, a Cambridge student. The basis of League’s demand was its “Two Nation Theory” which first came from Sir Wazir Hasan in his presidential address at Bombay session of League in 1937. He said, “the Hindus and Mussalmans inhabiting this vast continent are not two communities but should be considered two nations in many respects.” 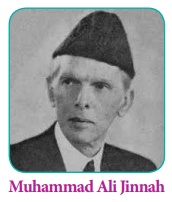 Neither Jinnah nor Nawab Zafrullah Khan then had considered creation of separate state for Muslims practicable. However, on March 23, 1940, the Muslim League formally adopted the idea by passing a resolution. The text of the resolution ran as under: “Resolved that it is the concerted view of this session of the All India Muslim League that no constitutional scheme would be workable in this country or acceptable to Muslims unless it is designed on the following basic principles, viz. that geographically contiguous units are demarcated into regions which should be constituted with such territorial readjustments as may be necessary, that the area in which the Muslims are numerically in majority should be grouped to constitute Independent State.” The League resolved that the British government before leaving India should effect the partition of the country into Indian union and Pakistan.