Two antigens—type A and type B—occur on the surfaces of the red blood cells in a large proportion of human beings.

Two antigens—type A and type B—occur on the surfaces of the red blood cells in a large proportion of human beings. It is these antigens (also called agglu-tinogens because they often cause blood cell agglutination) that cause mostblood transfusion reactions. Because of the way these agglutinogens are inher-ited, people may have neither of them on their cells, they may have one, or they may have both simultaneously.

Genetic Determination of the Agglutinogens. Two genes, one on each of two pairedchromosomes, determine the O-A-B blood type. These genes can be any one of three types but only one type on each of the two chromosomes: type O, type A, 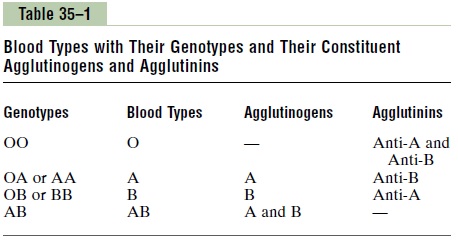 The prevalence of the different blood types among one group of persons studied was approximately:

It is obvious from these percentages that the O and A genes occur frequently, whereas the B gene is infrequent.

Titer of the Agglutinins at Different Ages. Immediately afterbirth, the quantity of agglutinins in the plasma is almost zero. Two to 8 months after birth, an infant begins to produce agglutinins—anti-A agglutinins 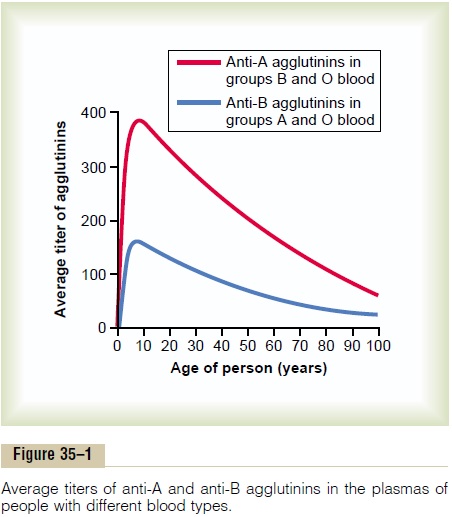 Origin of Agglutinins in the Plasma. The agglutinins aregamma globulins, as are almost all antibodies, and they are produced by the same bone marrow and lymph gland cells that produce antibodies to any other anti-gens. Most of them are IgM and IgG immunoglobulin molecules.

But why are these agglutinins produced in people who do not have the respective agglutinogens in their red blood cells? The answer to this is that small amounts of type A and B antigens enter the body in food, in bacteria, and in other ways, and these sub-stances initiate the development of the anti-A and anti-B agglutinins.

For instance, infusion of group A antigen into a recipient having a non-A blood type causes a typical immune response with formation of greater quantities of anti-A agglutinins than ever. Also, the neonate has few, if any, agglutinins, showing that agglutinin forma-tion occurs almost entirely after birth.

Sometimes, when recipient and donor bloods are mis-matched, immediate hemolysis of red cells occurs in the circulating blood. In this case, the antibodies cause lysis of the red blood cells by activating the comple-ment system, which releases proteolytic enzymes (the lytic complex) that rupture the cell membranes. Immediate intravascular hemolysis is far less common than agglutination fol-lowed by delayed hemolysis, because not only does there have to be a high titer of antibodies for lysis to occur, but also a different type of antibody seems to be required, mainly the IgM antibodies; these anti-bodies are called hemolysins.

Before giving a transfusion to a person, it is necessary to determine the blood type of the recipient’s blood and the blood type of the donor blood so that the bloods can be appropriately matched. This is called blood typing and blood matching, and these are per-formed in the following way: The red blood cells are first separated from the plasma and diluted with saline. One portion is then mixed with anti-A agglutinin and another portion with anti-B agglutinin. After several minutes, the mixtures are observed under a micro-scope. If the red blood cells have become clumped— that is, “agglutinated”—one knows that an antibody-antigen reaction has resulted. 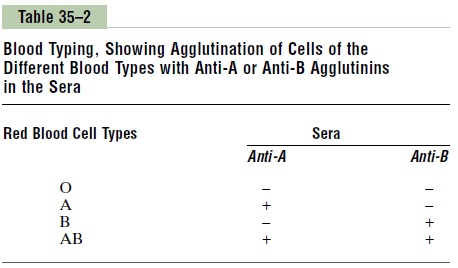