Feeding farmed shrimps generally depends on the culture system employed. The primary goal is to provide balanced nutrients to the farmed population and this is influenced by the quality and quantity of the nutritional resource and biomass of shrimps that rely on this as a source of food. Thus, in extensive production systems, feed is often not applied or the quality, in terms of nutrient composition, is low because the farm population can derive sufficient levels of balanced nutrition from the pond system. However, at higher stocking and bio-mass, the ability of the pond environment to sustain shrimp growth becomes limiting. At this point balanced nutrition of the applied feed is essential for continued growth of the population. Hence, the importance of nutritional qual-ity of feeds is a function of the type of culture system and the shrimp biomass within the system. For obvious reasons, nutritional deficiency disease is much more important in semi-intensive through super intensive systems than it is in extensive culture. The following nutritionally-related diseases or syndromes have been observed in cultured shrimps:

Vitamin C deficiency or black death disease occurred in juvenile to subadultpenaeid shrimp cultured intensively in tanks. All penaeid species are consid-ered susceptible. The cause is low level of vitamin C in the diet, and lack or absence of algal growth or other vitamin C sources in the culture system. Pres-ence of black lesions below a non-ulcerated cuticle provides a presumptive diagnosis of the disease. Diagnostic confirmation is done by histological dem-onstration of the characteristic melanized hemocytic nodules within tissues of high collagen content such as the connective tissues beneath the shell. Bacte-rial septicemia often accompanies the disease, suggesting an important role of vitamin C in crustacean defense to infection. Experimental results showed that vitamin C-deficient shrimps had slower wound-healing process than shrimps with adequate vitamin C in their diet. 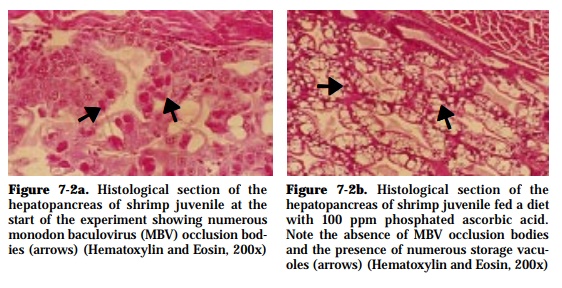 Shrimps in vitamin C-deficient populations had reduced growth and are prone to shell disease. Under experimental conditions, monodon baculovirus (MBV)-infected shrimps fed diets with 100 ppm phosphated ascorbic acid (MAP) or higher showed a marked absence of infection after three months (Fig. 7-2a, b) Shrimps fed vitamin C-deficient diets in the same experiment had MBV occlu-sion bodies still evident in the hepatopancreatic tubules after the same test period. The extent of vitamin C deficiency in cultured crustacean populations is unknown, but subclinical vitamin C deficiency may be widespread and com-mon in intensive culture settings. Once identified as a problem, control is achieved through proper diet formulation to deliver sufficient vitamin C needed for shrimp growth. Highly stable forms of vitamin C are presently avail-able for use, thus the problem of vitamin C degradation during feed manufac-ture and storage should no longer be a problem.

Soft-shell syndrome (Fig. 7-3) is a condition noted in farmed Penaeus monodon in the Philippines, India and probably other areas within the culture range of this species. In regions where it occurs, the syndrome is recognized as a signifi-cant problem that adversely affects production of grow-out farms. Soft-shelled shrimps are weak, prone to epibiotic fouling and cannibalism, and have reduced market value. The soft-shell condition results with the delay of several weeks in the normal hardening process of the cuticle following molting. Although the presence of the soft-shelled condition correlated well with the environmental conditions of high soil pH, low water phosphate, low organic matter, and insufficient water exchange, inadequate feeding practices or insuf-ficient food supply are the primary causes of the soft-shell problem. The atrophied condition of the hepatopancreas of soft-shelled shrimps support the hypothesis of underfeeding as a cause for the syndrome. Infrequent water exchange would support this conclusion because lack of an adequate supply of water leads farmers to reduce feed inputs because of instability in water quality conditions and greater likelihood of losses due to oxygen problem. 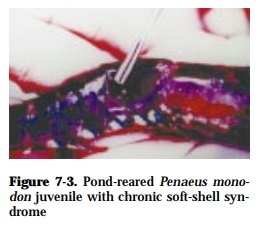 Shrimps with this disease/syndrome are light blue rather than grayish-brown in color (Fig. 7-4). Although the syndrome is not well understood until now, a deficiency in dietary carotenoids (i.e. asthaxanthin) is believed to be one of the causes. Prevention and control of blue disease is achieved through dietary ma-nipulation. Future work is needed to provide practical guidelines to farmers on management of the syndrome. Basic research work to further understand the effect of carotenoid dietary deficiency on crustacean health is also important. The role of environmental factors in the development of the syndrome also needs to be investigated. 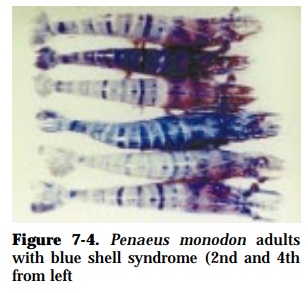 Body cramp refers to a syndrome of uncertain etiology. Nutritional factors, such as an imbalance in the Ca:Mg ratio and vitamin B deficiency, have been implicated as etiologic agents. Body cramp and muscle necrosis often occur together with the striated muscles as the target organ. Body cramp describes a functional lesion in which the muscle contracts but is unable to relax, hence, the abdomen or tail remains flexed for an extended period.

Underfed shrimps appear to have loose and oversized shells due to the reduc-tion of the muscular mass in the abdominal region. The most prominent lesion associated with underfeeding appears in the hepatopancreas. There is a marked atrophy of the tubules due to the absence of stored food in the cells (Fig. 7-5a, b). Underfeeding usually results because of management inexperi-ence. This happens when regular monitoring and estimation of shrimp biomass is not carried out, or the feeding rate is inappropriate because the animals are overstocked. Underfeeding could also be due to inadequate availability of en-ergy to sustain growth of the shrimps in the pond, or a lack of specific, limiting nutrients necessary for growth. In either case the initial sign is reduction or lack of growth of the population in the production setting. A diagnosis of underfeeding requires careful review of production records, water quality monitoring data, and animal examination. Since the principal sign of reduced or no growth is non-specific, many factors must be considered and eliminated in the diagnostic process. 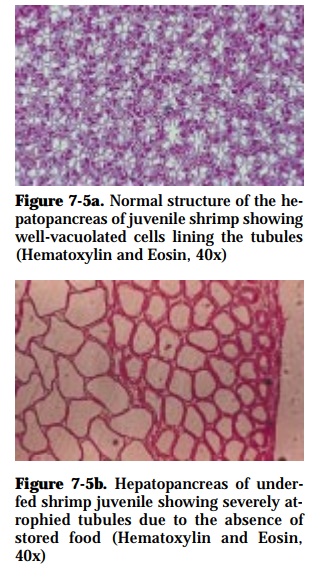 Prevention and control of an underfeeding problem is based on identification of the underlying contributing conditions and correction of these deficiencies. For example, if feeding rates are reduced to prevent water quality problems, then increased water exchange, reduction of anticipated harvest biomass, or both are needed. Improved growth of shrimps following a change in feed or feeding regimen supports the diagnosis of an underfeeding problem.