Feed storage is of particular importance in the tropics where the warm humidweather promotes rapid deterioration of feeds.

Feed storage is of particular importance in the tropics where the warm humidweather promotes rapid deterioration of feeds. Feeds in bags should be stored in a cool, dry area and low humidity must be maintained because moisture enhances mold growth and attracts insects. If proper storage conditions are not maintained, several factors can cause spoilage of the feed and pose problems such as:

•               contamination with microorganisms or their metabolic products

Artificial feeds contain ingredients that are prone to become rancid like fish meal, copra meal, rice bran and fish oils. Rancid oils can be toxic, may destroy other nutrients, and will cause off-flavor of the feed. Rancidity in feeds has a negative effect on its palatability, nutritional value, and it may also lead to toxicity problems. Fish that have prolonged exposure to rancid feeds may ex-hibit reduced appetite, slow growth and low feed efficiency.

Another feed-related problem with fish health implication is connected with the use of ingredients that are contaminated with microorganisms which may produce various toxins. This is primarily a problem with fish meal and other animal by-product meals, which are contaminated with Salmonella. Avoiding this problem involves the establishment of standards for fish feed ingredient quality. The feed standards could include maximum acceptable levels of micro-bial contamination.

Molds like those belonging to genus Aspergillus, which grow on the feeds, cause spoilage. These may also produce toxins such as aflatoxin. While afla-toxin may be produced during feed storage, it may also be produced in feed ingredients before these are used to make feeds. So, the establishment of stan-dards of feed ingredients must include examination of suspected materials for aflatoxin. In feeds that are susceptible to mold formation during storage, the addition of mold inhibitors is a recommended practice. The chosen inhibitor should not affect the palatability of feed to fish.

Because of the rampant occurrence of red disease-like lesions in cultured shrimp in the early 1990s, a study on the possible role of aflatoxin B1 (AFLB1) on the development of the disease was conducted. Juvenile shrimps were given diets with various levels of AFLB1, namely: 25, 50, 75, 100, and 200 parts per billion (ppb) for two months. Control shrimps were fed complete diets without AFLB1. The results showed that shrimps fed diets containing AFLB1of 75 ppb andabove had comparatively poor growth rates. In fact, shrimps given diets with 200 ppb AFLB1 showed negative growth after two months. The primary organ that is affected in aflatoxicosis is the hepatopancreas. Melanized lesions de-velop primarily in the central region of the organ causing dysfunction (Fig. 7-6). As the hepatopancreas is the organ responsible in the digestion, absorp-tion and storage of food, damage in its tissues leads to slow growth. Shrimps exposed to AFLB1were also prone to shell disease. 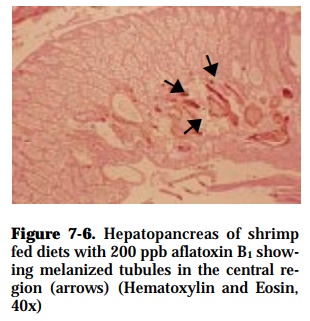 Studies also show that P. monodon juveniles can tolerate aflatoxin B1 levels of up to 52.3 µg/kg feeds, but histopathological changes are usually evident in shrimp tissues at a level of 26.5 µg/kg. Growth retardation was observed at levels of more than or equal to 73.8 µg/kg feeds.

Toxic components of the diet

Naturally occurring organic compounds found in some feed ingredients produce toxic responses in fish. Tannic acid and cyclopropenoid fatty acids induce liver cancer in fish. Gossypol, a toxin present in untreated cottonseed meal, causes anorexia and ceroid accumulation in the liver. Phytic acid, which ties up with zinc in the feed, and growth inhibitors found in soybean meal can be destroyed by proper heating during processing. Chlorinated hydrocarbons occur as contaminants in fish meal and can cause mortality when present in fry feeds. Broodstock transfer these compounds from the feed to their eggs, result-ing in low hatchability and high mortality of fry. The environment and feeds should be free from toxicants to maintain the health and efficient production of fish. Feed ingredients may also contain anti-nutritional factors. Most of these factors are found in ingredients of plant origin. The most common anti-nutri-tional factors in feed ingredients are trypsin inhibitors found in soybean meal.

The use of leaf meals as non-conventional protein sources for shrimp diets has been studied. Leucaena leucocephala (called “ipil-ipil” in the Philippines) leaves are one of the promising sources of plant protein for shrimp diets, however, the leaves contain a poisonous amino acid, mimosine, which causes pathological changes in the storage cells of the shrimp’s digestive organ. The mimosine content of the Leucaena leaves could be reduced by 70% if the leaves are soaked in freshwater for 24 h prior to incorporation in the artificial feeds.

Transmission of diseases through trash fish

The use of fresh or raw trash fish as a food presents the possibility of transmit-ting specific fish pathogens directly. Viral and bacterial diseases, as well as parasites can be transmitted to healthy fish by feeding them with contaminated trash fish. This problem will be minimized if trash fish is stored frozen in single-ration packages. Microorganisms and parasites that do not survive freez-ing temperatures will be eliminated. Thawing and re-freezing trash fish should be avoided to prevent their spoilage. Trash fish that have gone through a heat-ing step to destroy any fish pathogen that might be present is more appropriate than raw fish.