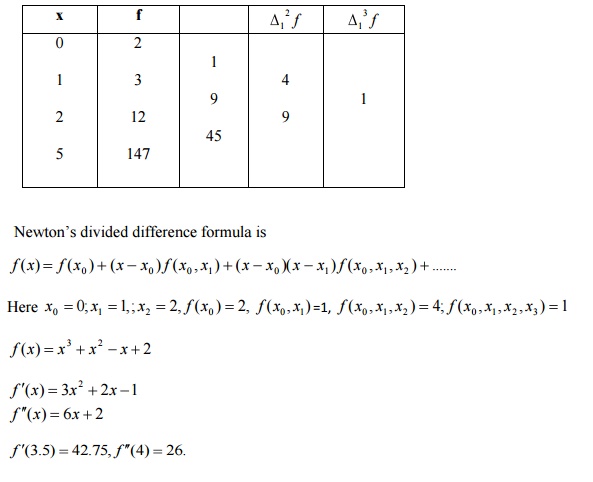 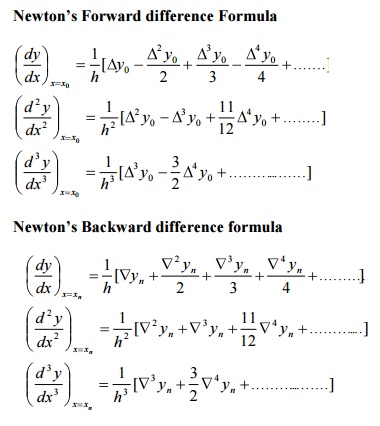 1.Find the first two derivatives of y at x=54 from the following data 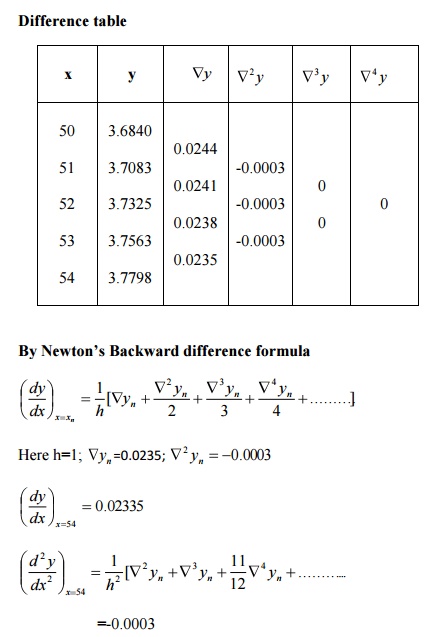 2.Find first and second derivatives of the function at the point x=12 from the following data 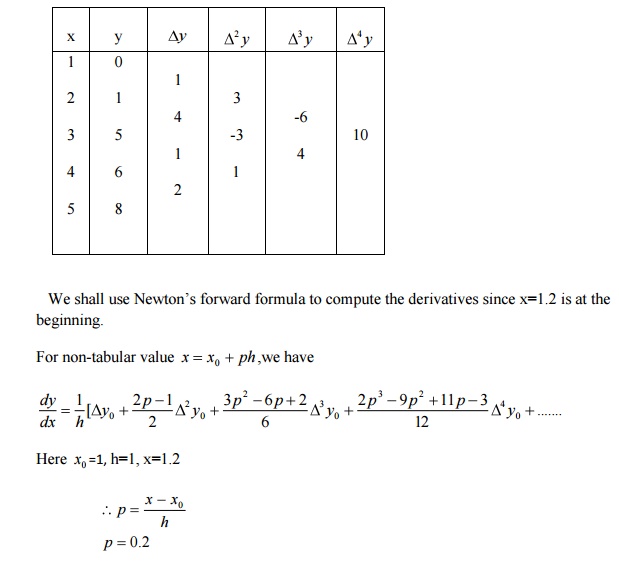 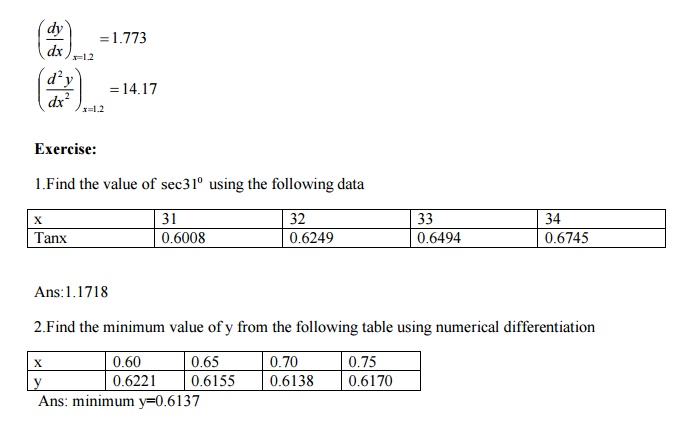 (Trapezoidal rules, Romberg & Simpson’s integration) Introduction The process of computing the value of a definite integral from a set of values (xi,yi),i=0,1,2,x=a;…..xb of Where the function y=f(x) is called Numerical integration.

Here the function y is replaced by an interpolation formula involving finite differences and then integrated between the limits a and b, the value is found.

On simplification we obtain

This is the general Quadrature formula

This value of I will be a better approximation than I1 or I2.This method is called Richardson’s deferred approach to the limit. 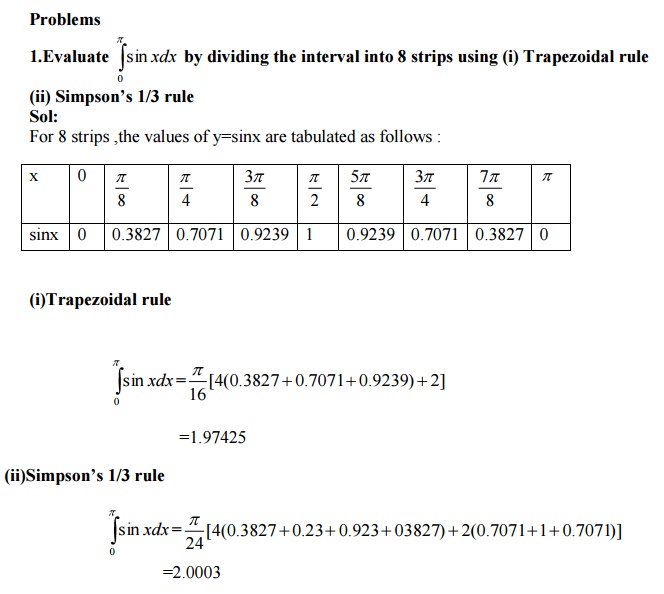 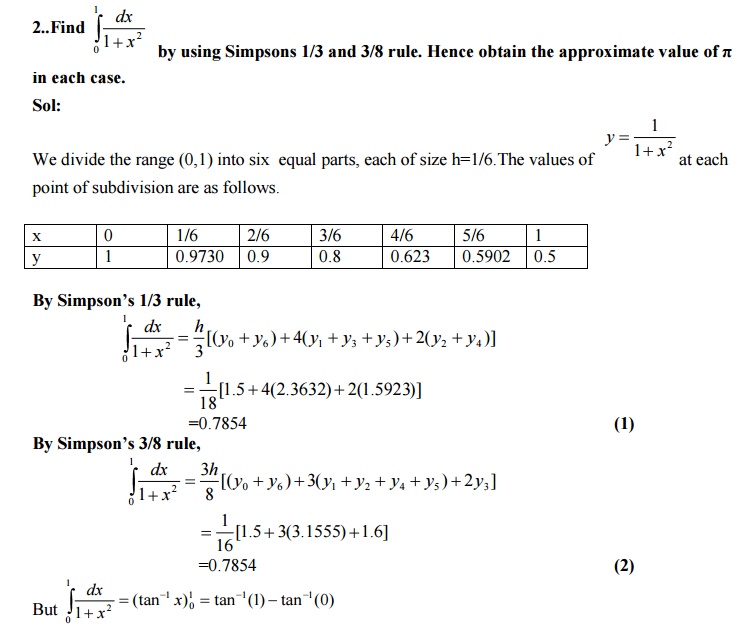 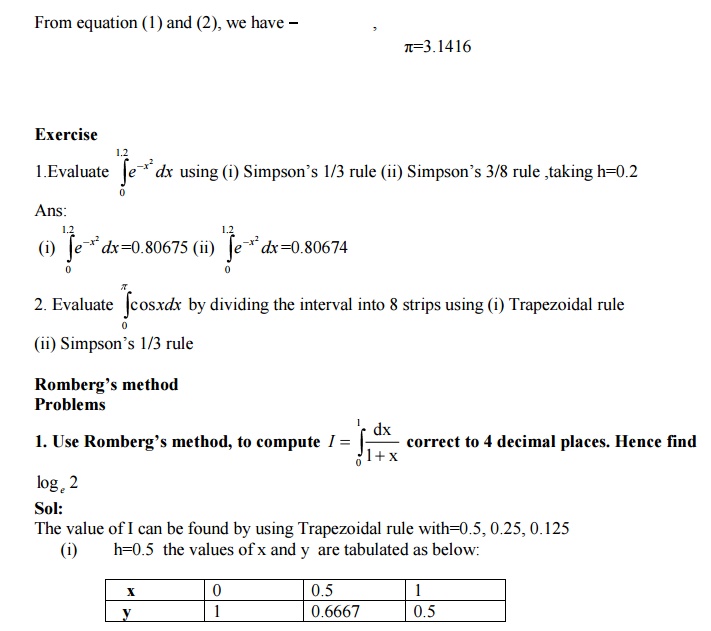 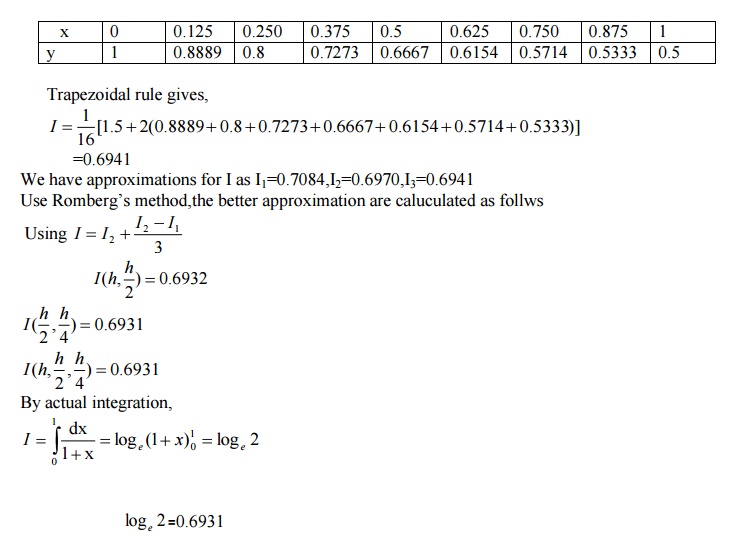 For evaluating the integral

, we derived some integration rules which require the values of the function at equally spaced points of the interval. Gauss derived formula which uses the same number of function values but with the different spacing gives better accuracy.

Where  wi  and u i  are called the weights and abscissa respectively. In this formula, the abscissa and weights are symmetrical with respect to the middle of the interval. The one-point Gaussian Quadrature formula is given by

, which is exact for polynomials of degree upto 1.

And this is exact for polynomials of degree upto 3.

Which is exact for polynomials of degree upto 5 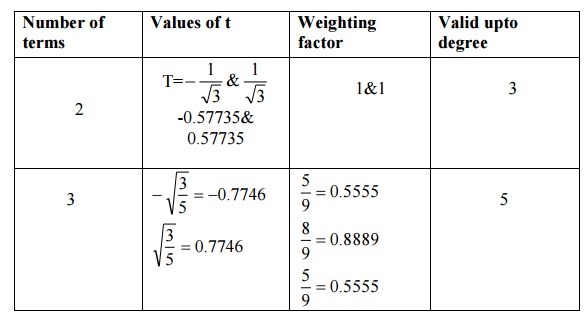 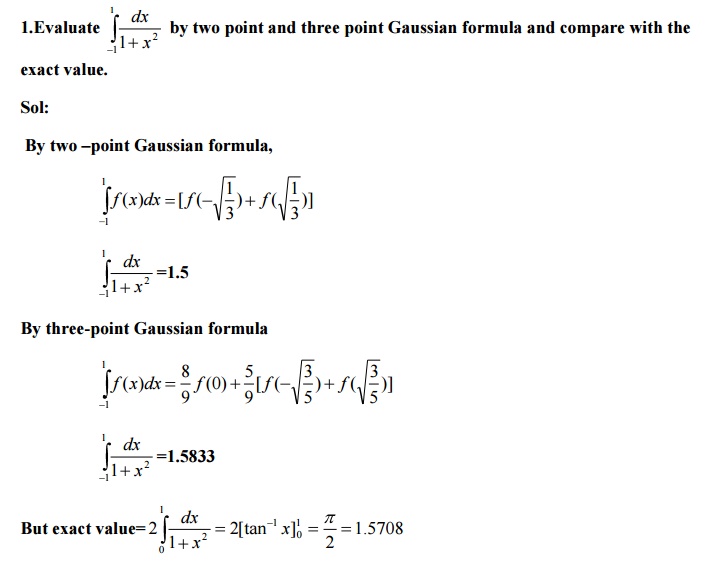 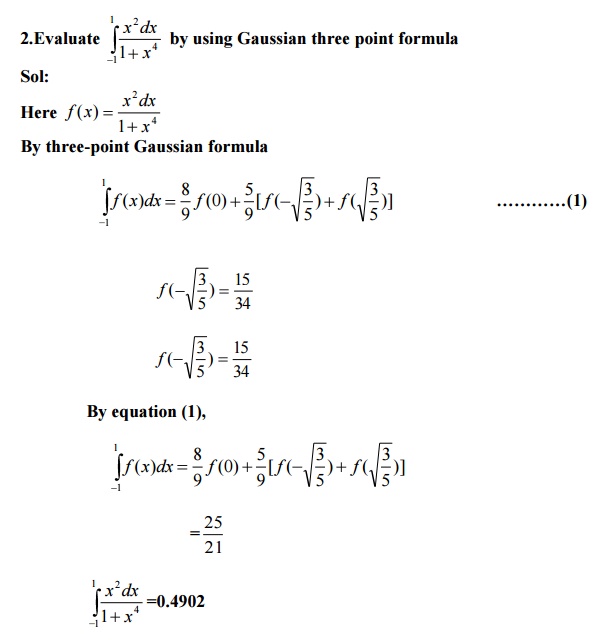 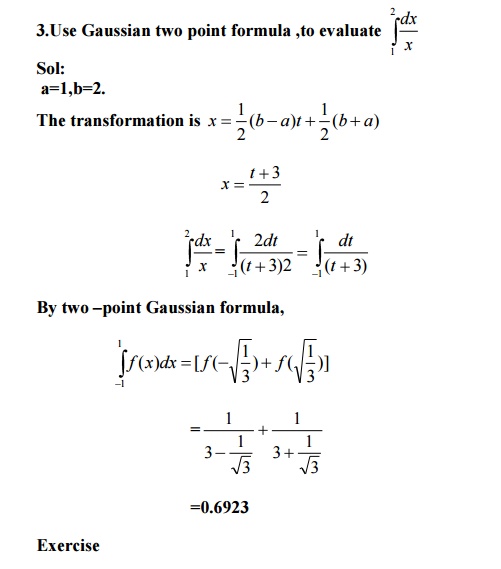 In this session we shall discuss the evaluation of

Consider the integral I

The integration in (1) can be obtained by successive application of any numerical integration formula with respect to different variables. 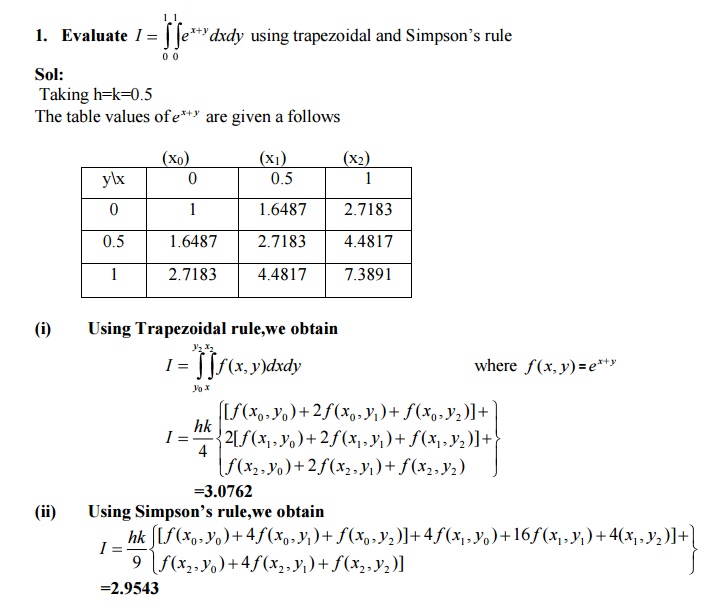 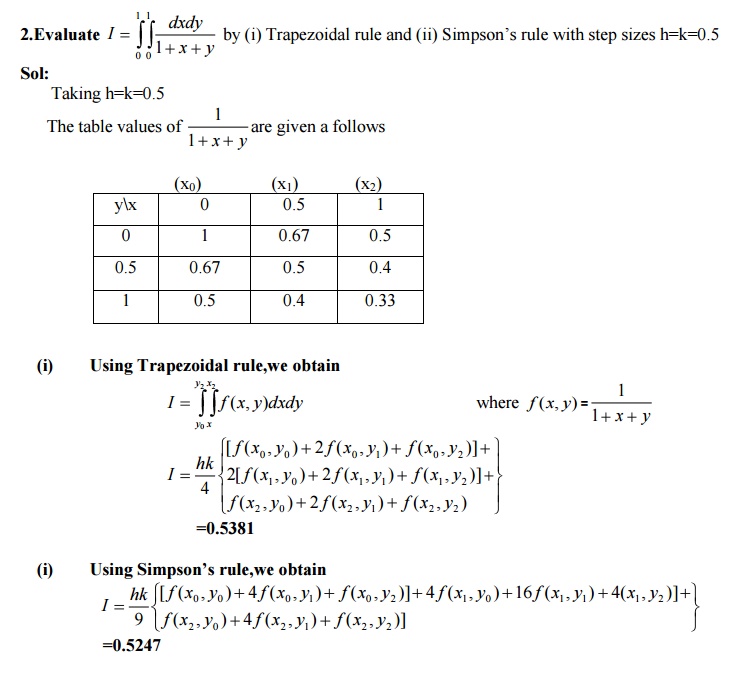 1.Find the value of  f ‘’(3) using divided differences, given data

2.Find the first and second derivatives of the function at the point x=1.2 from the following data

3.A rod is rotating in a plane .The angle θ ( values of time t (seconds) are given below

Find the angular velocity and angular acceleration of the rod when t=06 seconds.

4.From the table given below ,for what value of x, y is minimum? Also find this value of y.

5.Find the first and second derivatives of y at x=500 from the following data 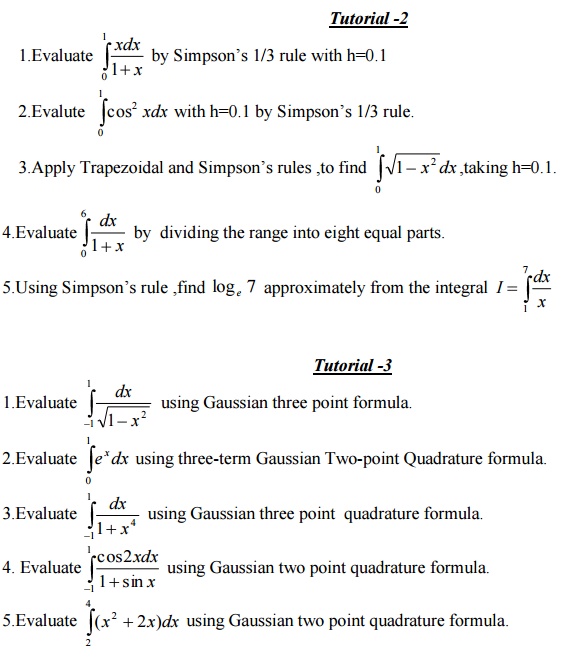 In the differential equation = f(x,y) the function f(x,y) may have a complicated

algebraical structure. Then the evaluation of higher order derivatives may become tedious. This is the demerit of this method.

R.K methods do not require prior calculation of higher derivatives of y(x), as the Taylor method does. Since the differential equations using in application are often complicated, the

calculation of derivatives may be difficult. Also R.K formulas involve the computations of f(x,y) at various positions instead of derivatives and this function occurs in the given equation.

3. What is a predictor- collector method of solving a differential equation?

predictor- collector methods are methods which require the values of y at xn, xn-1, xn-2,… 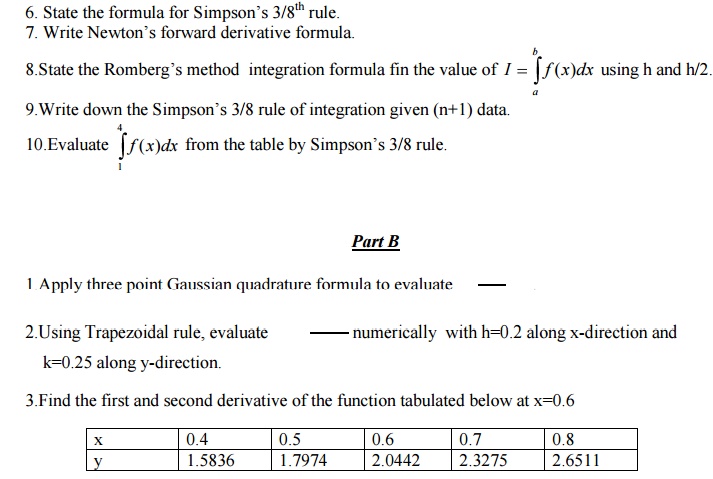 3.Find the first and second derivative of the function tabulated below at x=0.6

4. Using Romberg’s method dxcorrectto4 decimal to places compute. Also evaluate the same integral using three –point Gauss quadrature formula. Comment on the obtained values by comparing with exact value of the integral which is equal to .

by dividing the range into ten equal parts,using

Verify one your answer with actual integration.

9.The velocities of a car running on a straight road at intervals of 2 minutes are given below:

Using   Simpson’s-rulefindthedistance1/3covered by the car.