NRTIs are used to treat the patient with advanced HIV infection.

NRTIs are used to treat the patient with advanced HIV infection.

Drugs in this class include:

First in the fight against AIDS

Zidovudine was the first drug to receive Food and Drug Adminis-tration (FDA) approval for treating AIDS and AIDS-related com-plex.

Each of the NRTIs has its own pharmacokinetic properties.

Abacavir is rapidly and extensively absorbed after oral administra-tion. It’s distributed in the extravascular space, and about 50% binds with plasma proteins. Abacavir is metabolized by the cy-tosolic enzymes and excreted primarily in urine with the remain-der excreted in stool.

·                 Lamivudine and stavudine are rapidly absorbed after adminis-tration and are excreted by the kidneys.

·                 Emtricitabine is rapidly and extensively absorbed after oral ad-ministration and is excreted by the kidneys.

Because didanosine is degraded rapidly in gastric acid, didanosine tablets and powder contain a buffering drug to increase pH. The exact route of metabolism isn’t fully understood. About one-half of an absorbed dose is excreted in urine.

Zidovudine is well absorbed from the GI tract, widely distributed throughout the body, metabolized by the liver, and excreted by the kidneys. The dosage may need to be adjusted in the patient with kidney or liver disease, as is the case with most of the NRTIs.

NRTIs must undergo conversion to their active metabolites to pro-duce their action.

§    Abacavir is converted to an active metabolite that inhibits the activity of HIV-1 transcriptase by competing with a natural compo-nent and incorporating into viral DNA.

§    Lamivudine and stavudine are converted in the cells to their ac-tive metabolites, which inhibit viral DNA replication.

§    Zidovudine is converted by cellular enzymes to an active form, zidovudine triphosphate, which prevents viral DNA from replicat-ing. (See How zidovudine works)

NRTIs are used to treat HIV and AIDS. 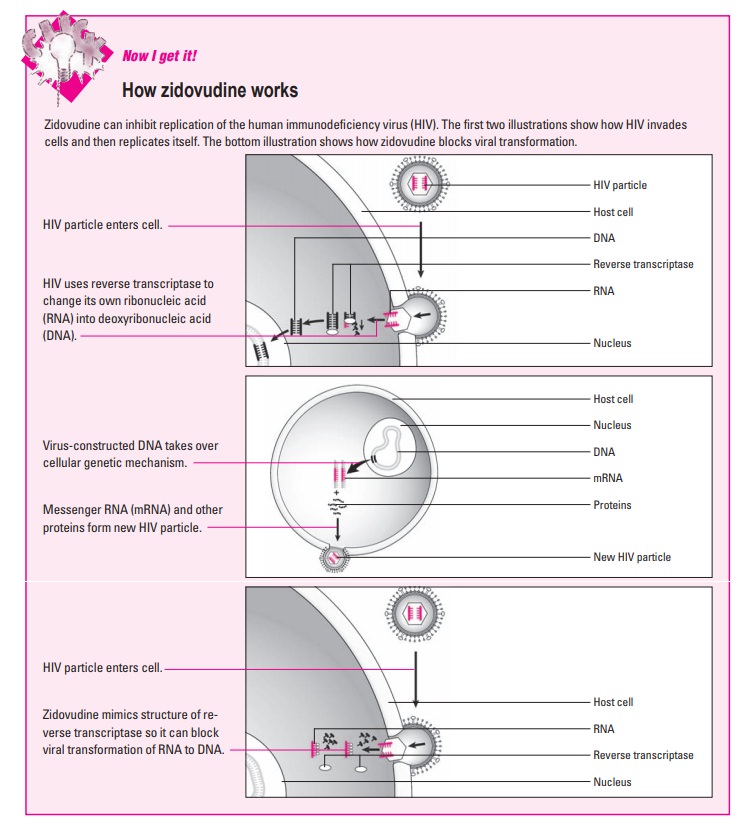 I.V. zidovudine is used for the hospitalized patient who can’t take oral medication. It’s also used to prevent transmission of HIV from the mother to her fetus and to treat AIDS-related dementia.

Like all drugs for HIV infection, oral zidovudine is used as part of a multidrug regimen.

Getting a jump on HIV

Didanosine, in combination with other antiretrovirals (antivirals used to treat HIV infection), is an alternative initial treatment for HIV infection.

Part of the combo…

Lamivudine, stavudine, and abacavir are used in combination with other antiretrovirals to treat HIV infection. Combivir is combina-tion therapy that includes lamivudine and zidovudine. Trizivir is combination therapy that includes abacavir, lamivudine, and zi-dovudine; it was approved by the FDA in November 2000 to sim-plify dosing in the treatment of HIV.

Emtricitabine is used in combination with other antiretrovirals to treat HIV infection.

…but be careful here

Because of inhibition of phosphorylation (the process needed to form the active DNA-inhibiting metabolite), stavudine shouldn’t be given in combination with zidovudine.

NRTIs may be responsible for many drug interactions.

§    Potentially fatal lactic acidosis and severe hepatomegaly with steatosis have occurred in patients taking NRTIs alone or with other antiretrovirals such as tenofovir. The majority of patients were women, and obesity and prolonged NRTI exposure may be risk factors.

§    An increased risk of cellular and kidney toxicity occurs when zi-dovudine is taken with such drugs as dapsone, pentamidine isethionate, flucytosine, vincristine, vinblastine, doxorubicin, in-terferon, and ganciclovir.

§    Taking zidovudine with probenecid, aspirin, acetaminophen, in-domethacin, cimetidine, or lorazepam increases the risk of toxici-ty of either drug.

§    Zidovudine plus acyclovir may produce profound lethargy and drowsiness.

§    Didanosine may reduce the absorption of tetracyclines, delavir-dine, and fluoroquinolones. Abacavir levels increase with alcohol consumption.

§    Emtricitabine has been studied in combination with indinavir, stavudine, famciclovir, and tenofovir; there were no clinically sig-nificant drug interactions. (See Adverse reactions to NRTIs.)