Many antibacterial drugs introduced for clinical use in recent years have been cephalosporins.

Many antibacterial drugs introduced for clinical use in recent years have been cephalosporins.

Cephalosporins are grouped into generations according to their effectiveness against different organisms, their characteristics, and their development.

After absorption, cephalosporins are distributed widely and readi-ly cross the placenta.

Many cephalosporins aren’t metabolized at all. Cefotaxime sodium is metabolized to the nonacetyl forms, which provide less antibac-terial activity than the parent compounds. To a small extent, cef-triaxone is metabolized in the intestines to inactive metabolites, which are excreted via the biliary system.

All cephalosporins are excreted primarily unchanged by the kid-neys with the exception of ceftriaxone, which is excreted in stool via bile.

Like penicillins, cephalosporins inhibit cell-wall synthesis by bind-ing to the bacterial enzymes known as PBPs, located on the cell membrane. After the drug damages the cell wall by binding with the PBPs, the body’s natural defense mechanisms destroy the bac-teria. (See How cephalosporins attack bacteria.)

The four generations of cephalosporins have particular therapeu-tic uses.

§    First-generation cephalosporins, which act primarily against gram-positive organisms, may be used as alternative therapy in the patient who’s allergic to penicillin, depending on how sensitive to penicillin he is. They’re also used to treat staphylococcal and streptococcal infections, including pneumonia, cellulitis (skin in-fection), and osteomyelitis (bone infection).

§    Second-generation cephalosporins act against gram-negative bacteria. Cefoxitin is the only cephalosporin effective against anaerobes (organisms that live without oxygen).

§    Third-generation cephalosporins, which act primarily against gram-negative organisms, are the drugs of choice for infections caused by Enterobacter, P. aeruginosa, and anaerobic organisms.

§    Fourth-generation cephalosporins are active against many gram-positive and gram-negative bacteria. 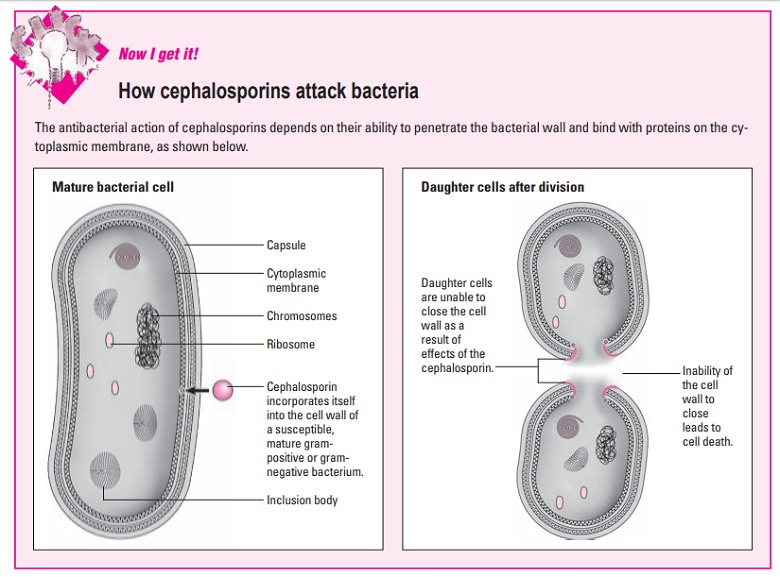 The patient receiving cephalosporins who drinks alcoholic bever-ages with or up to 72 hours after taking a dose may experience acute alcohol intolerance, with such signs and symptoms as headache, flushing, dizziness, nausea, vomiting, or abdominal cramps within 30 minutes of alcohol ingestion. This reaction can occur up to 3 days after discontinuing the antibiotic. (See Adverse reactions to cephalosporins.)

Uricosurics (drugs to relieve gout), such as probenecid and sulfinpyrazone, can reduce kidney excretion of some cephalosporins. Probenecid is used therapeutical-ly to increase and prolong plasma cephalosporin con-centrations.