Normal Flora at Various Sites of the Body

Respiratory tract is subdivided into (a) the upper airways, which include the anterior and posterior nares and the nasopharynx; (b) the middle airways comprising the oropharynx and tonsils; and (c) the lower airways with larynx, trachea, bronchi, and lungs.

Normal Flora at Various Sites of the Body

Respiratory tract is subdivided into (a) the upper airways, which include the anterior and posterior nares and the nasopharynx; (b) the middle airways comprising the oropharynx and tonsils; and (c) the lower airways with larynx, trachea, bronchi, and lungs. The structural and physiological differences at each site provide an environment compatible for some organisms and hostile for others.

Haemophilus spp. are present in almost all individuals in lessthan 5% of the microbial population. Fifty percent of them are noncapsulated. H.parainfluenzae makes 10% of the bacterial flora in saliva. Members of the Enterobacteriaceae and non-fermentative Gram-negative bacilli are also present in the oro-pharynx in small numbers or transiently.

Gram-positive bacteria are also predominant microbes that constitute normal flora of the oropharynx. Actinomyces are present in large numbers, comprising 20% of bacterial flora in saliva and on the tongue, 35% in the gingival crev-ices, and 40% in the dental plaque. The ability of Actinomycesspp. to colonize various surfaces is mediated by the fimbriae and other extracellular polysaccharides present in the bac-teria. Other Gram-positive bacilli present in the oropharynx are Actinobacillus, Corynebacterium, Eubacterium, Lactobacillus, Propionibacterium, and Rothia species.

Fungal colonization of the oropharynx is restricted to yeasts only; Candida albicans is present in almost all individuals.

Entamoeba gingivalis and Trichomonas tenax are the only protozoapresent in the oropharynx.

Colonization of the lower airways is transient with few organisms present at any one time. Long-term colonization may occur when the ciliated epithelial cells are damaged or altered in a disease process.

The gastrointestinal tract can be divided into various distinct anatomical areas. These include esophagus, stomach, jejunum and upper ileum, distal small intestine, and large intestine. The microbial flora present on the mucosa, within crypts, and in the lumen is different. Complete information has been obtained for the stomach and large intestine by studying the microbial composition of feces or the specimens collected during the intra-abdominal surgery.

Sufficient information is not available about the microbial flora of the esophagus. However, transient colonization by oropharyngeal bacteria and yeasts is known to occur.

Stomach is an inhospitable organ containing hydrochloric acid and pepsinogen. For this reason, the normal microbial flora is very sparse. The organisms present in the stomach are acid-tolerant Lactobacillus spp., Streptococcus spp., and Helicobacterpylori. H. pylori causes gastritis and gastric and duodenal ulcersand is associated with gastric malignancy.

The number of microbes in the upper part of the small intestine is less than 105/mL of fluid. They are predominantly anaero-bic, consisting ofLactobacillus, Peptostreptococcus, Streptococcus, Porphyromonas, and Prevotella. If upper tract obstruction andstasis occur, then the microbial flora shifts to resemble colonic bacteria, thereby leading to malabsorption syndrome.

This is the transition area between the stomach (where a sparse number of acid-tolerant bacteria are found) and the large intes-tine (which is inhabited by a plethora of microbes). The micro-bial population is large (108–109 organisms/g of feces) and diverse with the predominance of anaerobes.

E. coli causes colonization soon after an infant is born. It isthe most common facultative organism responsible for intra-abdominal infections. Other members of Enterobacteriaceae like Citrobacter spp., Klebsiella spp., Enterobacter spp., and Proteus spp.can establish residence in the intestine.

Streptococcus species and Actinomyces have been isolated fromfecal specimens. A variety of Peptostreptococcus and Gemella species are members of the normal intestinal flora. The spore-forming Bacillus species and Clostridium species are isolated from fecal specimens. Vibrio parahaemolyticuscan also colo-nize the intestinal tract, but only in small numbers. Other organisms commonly isolated in small numbers include species ofFusobacterium, Porphyromonas, and Prevotella species. Various species of Candida and protozoa colonize the large intestine.

With the exception of female urethra and vagina, the genito-urinary tract is generally sterile. The ureters, kidneys, prostrate, and cervix are normally sterile. The female urethra is colonized with large number of lactobacilli, streptococcal species, and coagulase-negative staphylococci. Fecal organisms, such as E. coli, Enterococcus spp., and Candida spp. can also colonize thefemale urethra, which is transient.

The aerobic bacteria present in the vagina include coagulase-negative Staphylococcus, Streptococcus (viridans group and beta-hemolytic strains),Corynebacterium spp., Gardnerella vaginalis, Neisseria spp., Haemophilus spp., and members of Enterobacteriaceae.Three species of nonpathogenicTreponema (Treponema phagede-nis, Treponema refringens, and Treponema minutum) are found invaginal specimens. Six species of Mycoplasma andUreaplasma are common inhabitants of vagina, which have pathogenic potential. The  flagellate  Trichomonas  vaginalis  is  present  in  small numbers  in  healthy  women.  Candida  species  and  Torulopsisglabrata are common members of the microbial flora of vagina.

Human skin is constantly bombarded by organisms present in the environment. The skin is exposed to extremes of tem-perature, moisture, and to chemical disinfectants. There the microbial population is less numerous and complex than at other body sites. The skin is not a homogenous surface. There are relatively dry areas like palms and soles; areas with more apocrine glands, such as axillary, inguinal, and perianal areas; and areas rich with sebaceous glands like forehead and nasola-bial folds. Most organisms proliferate in the moist area. Thus higher densities of microbes are present in areas rich with sweat glands. The skin of face, perirectal area, or groin has a more complex microbial flora than that at other sites (Fig. 75-1). 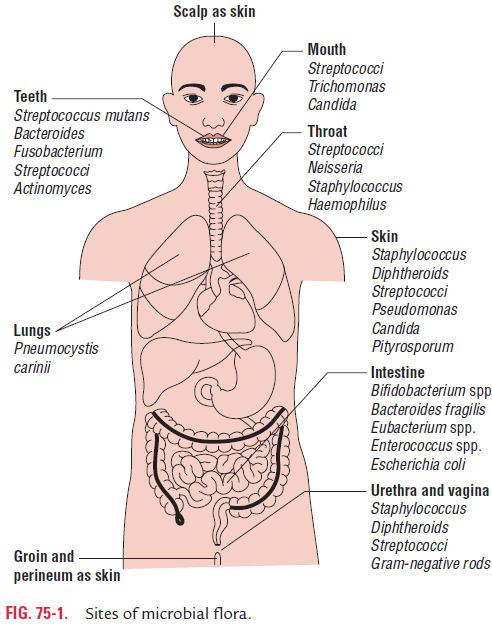 Gram-negative bacteria are generally not recovered from the surface of skin, except during transient colonization.

Acinetobacter spp. organisms have adapted to survive in moistareas of the skin.

Fungal colonization of the skin surface is transient. This includes colonization with yeasts (C. albicans, Malassezia furfur, and Rhodotorula) and dermatophytes. Among these, M. furfur is present in most of the individuals.

The flushing action of tears and presence of lysozymes in the tears usually make the conjunctiva free of bacteria. The organ-isms that may be present in the conjunctiva are C. xerosis, Moraxella spp., S. aureus, and nonhemolytic streptococci.

The body fluids which include blood, cerebrospinal fluid, syno-vial, pleural, pericardial, peritoneal, and other exudates are nor-mally sterile or transiently infected by microbes.

Some microbes from the mouth and gastrointestinal tract can invade the blood stream in healthy individuals (during tooth brushing or a bowel movement). These organisms are rap-idly removed and are of little significance. Thus, the isolation of an organism from body fluids should be considered significant unless the specimen is contaminated during its collection.

Organ tissues are also generally sterile unless they are infected following systemic spread. Some bacteria like Mycobacterium tuberculosis may be disseminated to lungs, liver,and kidney during initial infection and remain dormant. In this situation, the organism can be recovered from tissue samples. Long-term colonization with organisms like Pneumocystis carinii or latent viruses, such as herpes simplex virus or cytomegalovirus may commonly occur. The external auditory meatus, being an extension of the skin, is colonized primarily by S. epidermidis and diphtheroids.

Human body serves as a home for numerous microbes qual-itatively and quantitatively. They cover the skin and mucosal surfaces; occasionally, they invade into sterile sites to produce disease. These microorganisms act as a barrier to more viru-lent microorganisms, provide vitamins and required growth factors, or exist as commensal inhabitants. The complexity of the microbiota is influenced over time by environmental, host, and microbial factors. Thus, the knowledge of the human microbiota forms a fundamental building block of the normal physiological processes in the human body.