1.        Some of them are rapid growers. They produce colonies within 1–2 weeks of incubation in Lowenstein-Jensen (LJ ) medium.

3.        Some of them may produce bright yellow or orange pigments during their growth on the LJ medium.

4.        They are acid fast as well as alcohol fast. They may differ from or may resemble the tubercle bacilli.

5.        They are arylsulfatase test positive, but are niacin and neutral red reactions negative. 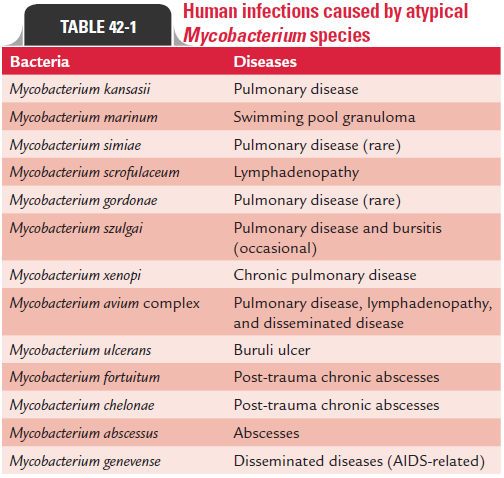 6.        They are usually resistant to antitubercular drugs, such as streptomycin, isoniazid (INH), and p-aminosalicylic acid.

MOTT are classified as rapid growers and slow growers:

·           Mycobacterium fortuitum, Mycobacterium chelonae, and Myco-bacterium abscessus are the examples of more rapidly growingMycobacterium species, which require incubation for 3 daysor more for development of the colonies.

·            Mycobacterium avium-intracellulare complex and Mycobacte-rium kansasii are the slow-growing Mycobacterium species andrequire 3–8 weeks of incubation for their growth.

Saprophytic bacteria or MOTT were classified by Runyon into four groups on the basis of their rate of growth and their ability to produce pigments in the presence or absence of light: