Muscarinic antagonists have no intrinsic activity, and they can produce effects only by blocking the activation of muscarinic receptors by muscarinic agonists or by neuronally released ACh. 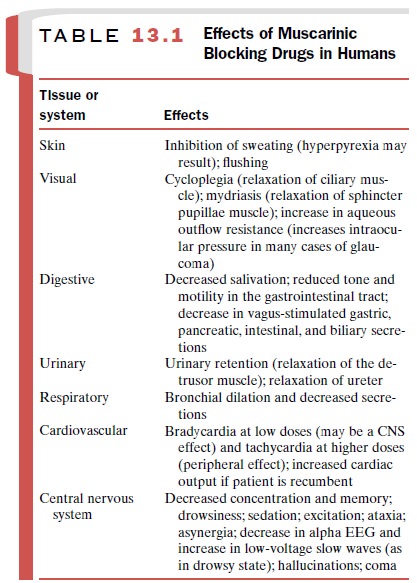 Intravenous administration of low doses of atropine or scopolamine often produces slight bradycardia, whereas higher doses produce tachycardia by directly blocking the parasympathetic input to the sinoatrial node. Although it has been suggested that the bradycardia re-sults from an effect of the drugs on the CNS (thought to be central vagal stimulation), this appears unlikely, since methylatropine (a quaternary ammonium deriva-tive of atropine) produces a similar response. One plau-sible explanation for the paradoxical bradycardia pro-duced by low doses of muscarinic blockers is that they block presynaptic muscarinic receptors that normally provide feedback inhibition of the release of ACh. Antagonism of these presynaptic muscarinic receptors prevents feedback inhibition and increases the release of ACh, and this effect may dominate postsynaptic mus-carinic receptor blockade produced by low doses of an-tagonist. Atropine can also facilitate atrioventricular (A-V) conduction and block parasympathetic effects on the cardiac conduction system and on myocardial con-tractility.

Atropine and other muscarinic antagonists produce minimal effects on the circulation in the absence of cir-culating muscarinic agonists. This reflects the relatively minor role of cholinergic innervation in determining vascular smooth muscle tone. Atropine can produce flushing in the blush area owing to vasodilation. It is not known whether this is a direct effect or a response to the hyperthermia induced by the drug’s ability to inhibit sweating.

Muscarinic antagonists have numerous effects on the digestive system . The inhibition of salivation by low doses of atropine results in a dry mouth and difficulty in swallowing. Antimuscarinic drugs also inhibit gastric acid secretion and gastroin-testinal motility, because both processes are partly un-der the control of the vagus nerve. Relatively large doses of atropine are required to inhibit acid secretion, and side effects such as dry mouth, tachycardia, ocular disturbances, and urinary retention are drawbacks to the use of muscarinic antagonists in the treatment of peptic ulcers.

Muscarinic antagonists can cause urinary retention by blocking the excitatory effect of ACh on the detrusor muscle of the bladder. During urination, cholinergic in-put to this smooth muscle is activated by a stretch reflex.

Although atropine and scopolamine share many prop-erties, an important difference is the easier entry of scopolamine into the CNS. Typical doses of atropine (0.2–2 mg) have minimal central effects, while larger doses can produce a constellation of responses collec-tively termed the central anticholinergic syndrome. At intermediate doses (2–10 mg), memory and concentra-tion may be impaired, and the patient may be drowsy. If doses of 10 mg or more are used, the patient may ex-hibit confusion, excitement, hallucinations, ataxia, asyn-ergia, and possibly coma.

Antimuscarinic drugs block contraction of the iris sphincter and ciliary muscles of the eye produced by ACh. This results in dilation of the pupil (mydriasis) and paralysis of accommodation (cycloplegia), responses that cause photophobia and inability to focus on nearby objects. Ocular effects are produced only after higher parenteral doses. Atropine and scopolamine produce responses lasting several days when applied directly to the eyes.

Muscarinic antagonists inhibit secretions and relax smooth muscle in the respiratory system. The parasym-pathetic innervation of respiratory smooth muscle is most abundant in large airways, where it exerts a domi-nant constrictor action. In agreement with this innerva-tion pattern, muscarinic antagonists produce their greatest bronchodilator effect at large-caliber airways.

By this mechanism they can block reflex laryngospasm during surgery. In addition, these drugs are potent in-hibitors of secretions throughout the respiratory sys-tem, from the nose to the bronchioles.

Although the antimuscarinic drugs are normally selec-tive for muscarinic cholinergic receptors, high concen-trations of agents with a quaternary ammonium group (e.g., propantheline) can block nicotinic receptors on autonomic ganglia and skeletal muscles. However, these effects are generally not clinically important at usual therapeutic doses.