When there is more than one fetus in- utero the term 'plural' or 'multiple' pregnancy is applied. Twins occur approximately once in about every 90 pregnancies, and the tendency is manifest in certain families.

When there is more than one fetus in- utero the term 'plural' or 'multiple' pregnancy is applied. Twins occur approximately once in about every 90 pregnancies, and the tendency is manifest in certain families.

Monozygotic or single ovum twins are known ^as identical twins because their physical and mental characteristics are so similar. They develop from one ovum which has been fertilised by one spermatozoon and are always of the same sex. They are definitely uniovular if they share one placenta and one chorion; a few have two chorions. There is a connection between the circulations of blood in the two babies. Finger and palm prints are identical in monozygotic twins.

Errors in development are more likely in monozygotic twins, so abnormal fetuses are more common: conjoined twins, usually known as Siamese, are uniovular in type- The perinatal mortality rate is higher than in dizygotic twins.

Dizygotic or double ovum twins, which are three times more common than uniovular twins, develop from the fertilisation of two ova and two spermatozoa. The babies may or may not be of the same sex and their physical and mental characteristics can be as different as in any two members of one family. Dizygotic twin bearing is hereditary mainly via the mother. They each have a separate placenta and chorion, but, although the placentae may

If the babies are of different sexes or have two separate placentae, they are definitely dizygotic. But sometimes the two zygotes embed close to each other so that the placentae fuse and appear to the naked eye to be one single placenta. In that case.if the sex of the babies is the same, diagnosis is made by examination of the membranes of the fetal sac, in dizygotic twins two chorions are present. 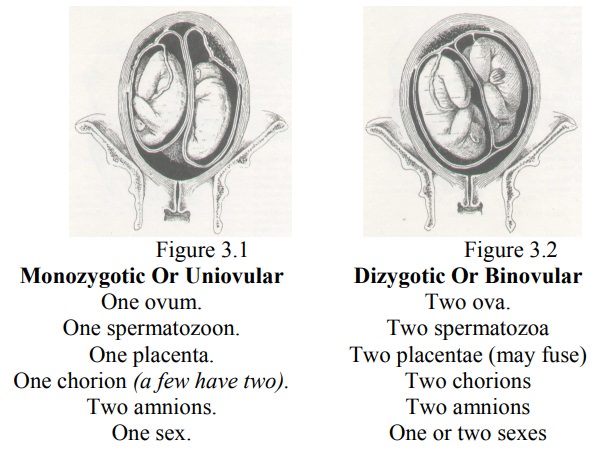 Very occasionally one fetus may die and be retained in utero until term when it will be expelled with the placenta as a flattened paper-like fetus—a fetus papyraceous. Although twin babies are as a rule small and often preterm, ranging from 2260g to 2720g, normal weights are not uncommon; the author having seen twins weighing 4060g and 3960g; 4340g and 4300g.

The diagnosis of twins is not always easy in primigravidae with firm abdominal walls, or in obese women, and experienced doctors and midwives may not always detect them. The period of gestation is also difficult to assess.

An ultrasonic scan will demonstrate two heads at 15 weeks; two gestational sacs have been seen at eight weeks. X-rays may be used after the 30th week.

Twins may first be diagnosed by finding the uterus large and the fundus well above the umbilicus after the birth of the first baby.

Suspicious is aroused when the uterus is unduly large for the period of gestation after the 20th week. The uterus looks round or broad and fetal movement may be seen over a wide area, but this is not diagnostic. At term, a woman of average build has an abdominal girth of about 100cm. the possibility of polydramnios must be considered, and it can be present in conjunction with or independent of twins, but palpation should help to conclude the diagnosis.

Finding two heads is diagnostic. If one fetus lies in front of the other, it may not be easy to detect two heads or two backs. Should the fetal head seem small in comparison with the size of the uterus this rather suggests the presence of two fetuses. Excessive fetal parts might make one suggest that twins were present.

Hearing two fetal hearts is not a reliable method of diagnosis because with a large, vigorous fetus, the fetal heart can sometimes be heard over a wide area.

The Effect of Twins on Pregnancy

Pre-eclampsia is more common than in single pregnancies.Polyhydramnios. Acute polyhydramnios is invariably associatedwith uniovular twins ,the usual outcome being abortion.

Anaemia develops because of the increased fetal demands foriron:

Pressure symptoms due to the weight and size of the uterus maybe troublesome,

·              The tendency to oedema of the ankles and varicose veins is increased because of pressure on the veins returning blood from the lower limbs,

As soon as twins are diagnosed a close check should be kept on the mother's haemoglobin and advice given regarding foods rich in iron.

Ferrous preparations are usually prescribed and vitamin supplements are essential.. The woman should drink at least 1200 ml of milk daily to prevent her calcium reserves from being depleted.

Her protein intake must be adequate.

In order to detect pre-eclampsia which is three times more common in multiple pregnancy, the woman is seen weekly from the time twins are diagnosed about the 20th week.

To relieve the discomfort of a heavy uterus, a good supporting maternity belt will be appreciated.

Extra pillows are needed for sleep, as the woman feels more comfortable when propped up. Adequate rest is essential during the last 12 weeks to increase uterine blood flow.

The woman may be admitted to hospital from the 30th to the 36th week to avoid preterm labour by providing rest, and to improve her nutrition. She should not be permitted to go beyond term but many go into labour prior to then.

The Effect of Twins on Labour

Although, multiple pregnancy may not be regarded as abnormal in itself, many complications that endanger fetal and maternal life do arise . Labour is often preterm: the babies tend to be light for date even when at term.

The perinatal mortality rate is higher than in single births. The mortality rate of the second twin is twice that of the first, and this may be due to reduction in the placental circulation and partial separation of placenta following the birth of the first twin.

Malpresentation is more common. For these reasons hospitalization for delivery is advocated.

The Management of Labour

Heavy sedation should be avoided.

Epidural analgesia may be use.

If delay occurs due to hypotonic uterine action after the delivery of the first twin an oxytocin drip may be given after puncture of the membranes and kept running until one hour after both babies and placenta are delivered.

Preparations should be made for the reception of two immature babies, who may show signs of asphyxia or intracranial injury.

Woman should be observed for signs of shock due to sudden reduction in abdominal pressure.

The woman may be more comfortable in the dorsal position with additional pillows.

Perineal infiltration or pudendal nerve block is commonly employed and an episiotomy is made in an endeavour to lower thehigh perinatal mortality rate.

The airway of the first baby is cleared. The cord should be ligatured in two places, for although the placental end of the cord is tied or clamped at every delivery, it is because of the possibility of undiagnosed monozygotic twins that this is done. The first baby, after being marked No. 1, is laid in a warm cot and the midwife keeps her 'ear and eye on it.

The abdomen is palpated without delay to ensure that the lie of the second twin is longitudinal. Presentation and position are diagnosed, but are of less importance: the fetal heart is listened to. The midwife stands by. She will closely observe the uterus, probably keeping her hand lightly on it to detect uterine contractions. The fetal heart should be checked frequently.

With three or four good contractions and the woman pushing effectively the second baby ought to be born. But if, when 5 minutes have elapsed, contractions have not recommenced, the midwife should scrub up and after making sure that the head or the breech is presenting she should puncture the bag of membranes and massage the uterus to stimulate uterine action. The second baby should be born within 15 minutes after the first baby.

Ergometrine, 0.5mg or Syntometrine, 1ml, should be given intramuscularly as soon as both placentae are born to prevent postpartum haemorrhage. If Syntometrine is given inadvertently after the birth of the first baby, the second baby must be expelled immediately by fundal pressure. Midwives must always remember the possibility of an undiagnosed twin when they administer Syntometrine during the actual birth of a baby. The woman should not be left until at least two hours after the birth of the palcentae and to ensure sleep a sedative is given.

Avoid unnecessary delay in the delivery of the second as this may result in:

The fetus in utero may die of anoxia should the palcenta separates.

The risk of sepsis is increased when the cord is lying outside the vulva.

The cervix closes to a certain extent and will have to dilate again. Having ensured that the lie is longitudinal, the doctor will probably puncture the membranes, and give an oxytocin drip, when the uterus begins to contract he may apply forceps or use the Malmstrom vacuum extractor.

The expulsion of a placenta or bleeding before the birth ofthe second twin gives warning that the placenta still in- utero may also be separating and causing hypoxia of the unborn twin; in which case, the midwife should massage the uterus and expel the second twin as soon as possible by using fundal pressure. (The usual sequence of events is for both babies to be born and then the placentae).

Management of the Puerperium

Involution of the uterus may be slow; after pains are more troublesome. The care of the babies is a most urgent problem, as the number of twin babies who die is alarmingly high, the smaller one may be light for date. The mother will need help and advice in regard to feeding, and should not be discharge from hospital until the babies are gaining weight satisfactorily.

Some conditions that affect the health of the woman during pregnancy are directly related to the pregnancy itself. They add more risk to the mother and the fetus while some lead to greater emotional and financial difficulties e.g. multiple pregnancy. Early diagnosis of these conditions prevents the serious effect on the pregnancy, labour and puerperium. Women with previous history of these conditions must register early and pay more visits to the clinic for close monitoring of their condition.