Learning Objectives - Childern will be able to: * list the minerals found in Tamil Nadu. * describe the uses of the minerals.

Childern will be able to:

* describe the uses of the minerals.

A conversation between a father and son in their new house where some electrical work is going on. The son picks up an insulated copper wire from the ground. 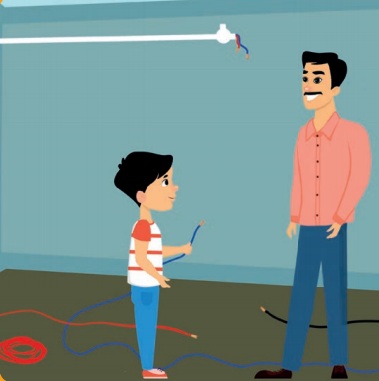 Father : That is a wire. We are using it to give electrical connection in our house.

Son : This is blue thick wire and there are many thin metal wires inside this.

Father : The thin metal wires are made up of copper. 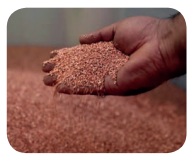 Father : Copper is one of the most used mineral in today‛s world.

Son : I have read about minerals in school. They are very useful and are found naturally on the Earth.

Father : You are right. Copper is very good conductor of electricity.

Father : Yes, Copper is used in all electrical appliances including computers, televisions, mobile phones and other electronic devices.

Natural resources are important to us because they satisfy the daily needs of man such as food, clothing and shelter. 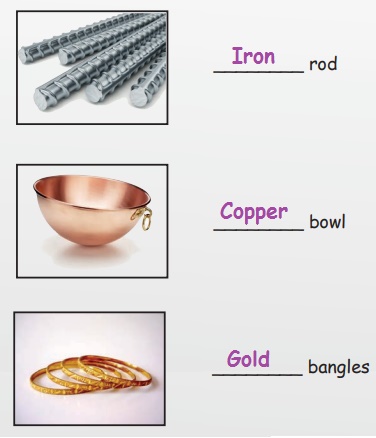 Son : Wow. I did not know that. Tell me about other useful minerals.

Father : Another widely used mineral is Iron ore. It is mainly used to produce iron. 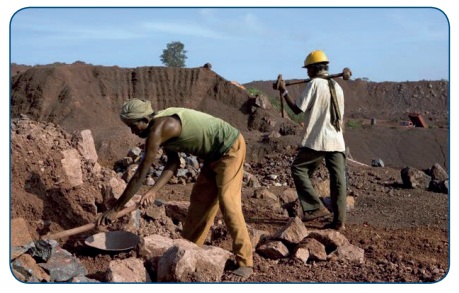 Son: What are the uses of Iron?

Iron ores are found at Kanjamalai in Tamil Nadu.

Natural resources that once consumed, cannot be replaced are called non-renewable resources.

Non-renewable resources can be divided into three types. They are:

Father : Yes it is. Gold is extracted from Gold Ore. It is considered as one of the most precious mineral.

Son: That‛s why it is used in making jewels.

Father : You are right. Gold is also a very good conductor of electricity and it is found in small amounts in electronic devices including mobile phones, televisions and so on.

Think Are there any minerals available in your district? What are they?

Son : Bauxite. I have never heard of it.

Father : Bauxite is used to make aluminium. Aluminium is used in electronics, construction, vehicles and even in utensils.

The bauxite deposits are mainly found in the Shervaroy hills of Salem district, Tamil Nadu. 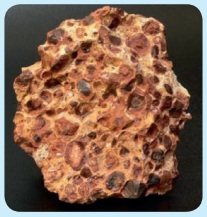 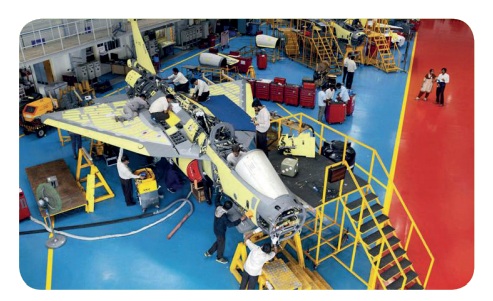 Father : Bauxite is used to make paper, purify water and refine petroleum. It is also used to manufacture rubber and cosmetics.

Son : This is very informative, Dad.

Find the missing piece of the Aircraft. 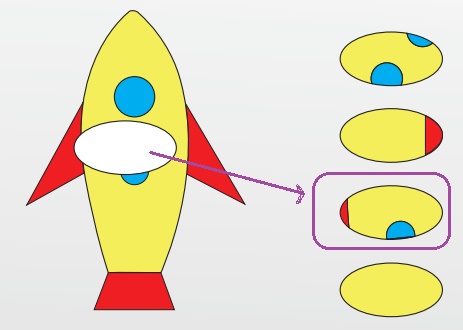 Father : Have you heard about Zinc?

Father : Zinc is called the essential trace element because very small amount of zinc is necessary for human health. Our body does not store excess zinc, it must be consumed regularly as part of the diet. Common food sources of zinc include red meat, white meat and sea food.

Son : What are the other uses of zinc?

Father : Zinc oxide is widely used in the manufacture of many products such as paints, rubbers, cosmetics, medicines, inks, batteries, textiles and electrical equipments. 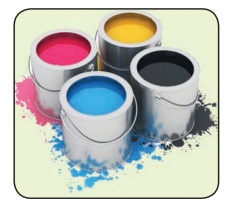 Father : The another most useful mineral is Potash.

Son: What are the uses of Potash?

Father : 95% of Potash is used for making fertilizers. If the soil does not have enough potassium, potash fertilizers are used to improve the quality of soil. The remaining 5% potash is used in commercial and industrial products such as soap.

Son: Thank you, Dad. This has been very useful. I am going to share this with my friends.

Conductor : A substance that quickly conducts electricity, heat and so on

* Minerals are very useful and found naturally on the Earth.

* Copper is used in all electrical appliances.

* Gold is considered as one of the most precious metal.

* Bauxite is used to make aluminium.

* Potash is used for making fertilizer.