Chapter: Transmission and Distribution : Mechanical Design of Lines and Grounding

In power system, grounding or earthing means connecting frame of electrical equipment (non-current carrying part) or some electrical part of the system (e.g. neutral point in a star-connected system, one conductor of the secondary of a transformer etc.) to earth i.e. soil. This connection to earth may be through a conductor or some other circuit element (e.g. are resistor, a circuit breaker etc.) depending up on the situation, grounding or earthing offers two principal advantages. First, it provides protection to the power system. For example, If the neutral point of a star-connected system is grounded through a circuit breaker and phase to earth fault occurs on any one line, a large fault current will flow through the circuit breaker. The circuit breaker will open to isolate the faulty line. This protects the power system from the harmful effects of the fault. Secondly, earthing of electrical equipment ensures the safety of the persons handling the equipment. For example, if insulation fails, there will be a direct contact of the live conductor with the metallic part (i.e. frame) of the equipment. Any person in contact with the metallic part of this equipment will be subjected to a dangerous electrical shock which can be fatal. In this chapter, we shall discuss the importance of grounding or earthing in the line of power system with special emphasis on neutral grounding.

The process of connecting the metallic frame (i.e. non-current carrying part) of electrical equipment or some electrical part of the system (e.g. neutral point in a star- connected system, one conductor of the secondary of a transformer etc.) to earth (i.e. soil) is called grounding or earthing. It is strange but true that grounding of electrical systems is less understood aspect of power system. Nevertheless, it is a very important subject. If grounding is done systematically in the line of the power system, we can effectively prevent accidents and damage to the equipment of the power system and at the same time continuity of supply can be maintained. Grounding or earthing may be classified as:(i) Equipment grounding (ii) System grounding. Equipment grounding deals with earthing the non-current-carrying metal parts of the electrical equipment. On the other hand, system grounding means earthing some part of the electrical system e.g. earthing of neutral point of star-connected system in generating stations and substations.

The process of connecting neutral point of 3-phase system to earth (i.e. soil) either directly or through some circuit element is called neutral grounding. Neutral grounding provides protection to personal and equipment. It is because during earth fault, the current path is completed through the earthed neutral and the protective devices (e.g. a fuse etc.) operate to isolate the faulty conductor from the rest of the system. This point is illustrated in Fig.

Fig. shows a 3-phase, star-connected system with neutral earthed. Suppose a single line to ground fault occurs in line R at point F. This will cause the current to flow through ground path as shown in Fig.1. Note that current flows from R phase to earth, then to neutral point N and back to R-phase. Since the impedance of the current path is low, a large current flows through this path. This large current will blow the fuse in R-phase and isolate the faulty line R. This will protect the system from the harmful effects of the fault. One important feature of grounded neutral is that the potential difference between the live conductor and ground will not exceed the phase voltage of the system i.e. it will remain nearly constant.

The following are the advantages of neutral grounding

(i)  Voltages of the healthy phases do not exceed line to ground voltages i.e. they remain nearly constant.

(ii) The high voltages due to arcing grounds are eliminated.

(iv)The over voltages due to lightning are discharged to earth.

(v) It provides greater safety to personnel and equipment.

The methods commonly used for grounding the neutral point of a 3-phase system are :

( i ) Solid or effective grounding

The choice of the method of grounding depends upon many factors including the size of the system, system voltage and the scheme of protection to be used. 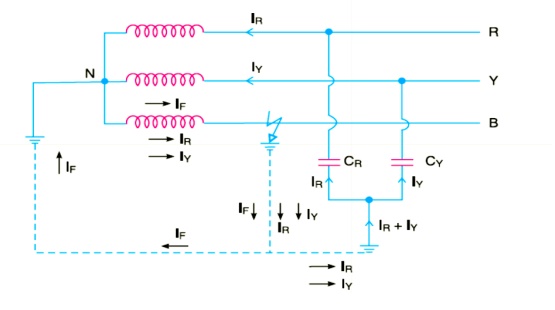 The solid grounding of neutral point has the following advantages:

(i) The neutral is effectively held at earth potential.

(ii)When earth fault occurs on any phase, the resultant capacitive current IC is in phase opposition to the fault current IF . The two currents completely cancel each other. Therefore, no arcing ground or over-voltage conditions can occur. Consider a line to ground fault in line B as shown in Fig. The capacitive currents flowing in the healthy phases R and Y are IR and IY respectively. The resultant capacitive current IC is the phasor sum of IR and IY . In addition to these capacitive currents, the power source also supplies the fault current IF . This fault current will go from fault point to earth, then to neutral point N and back to the fault point through the faulty phase. The path of IC is capacitive and that of IF is *inductive. The two currents are in phase opposition and completely cancel each other. Therefore, no arcing ground phenomenon or over-voltage conditions can occur.

(iii)When there is an earth fault on any phase of the system, the phase to earth voltage of the faulty phase becomes zero. However, the phase to earth voltages of the remaining two healthy phases remain at normal phase voltage because the potential of the neutral is fixed at earth potential. This permits to insulate the equipment for phase voltage. Therefore, there is a saving in the cost of equipment.

(iv) It becomes easier to protect the system from earth faults which frequently occur on the system. When there is an earth fault on any phase of the system, large fault current flows between the fault point and the grounded neutral. This permits the easy operation of earth fault relay.

The following are the disadvantages of solid grounding :

(i)  Since most of the faults on an overhead system are phase to earth faults, the system has to bear a large number of severe shocks. This causes the system to become unstable.

Solid grounding is usually employed where the circuit impedance is sufficiently high so as to keep the earth fault current within safe limits. This system of grounding is used for voltages up to 33 kV with total power capacity not exceeding 5000 kVA.

On the other hand, if the earthing resistance R is very high, the system conditions become similar to ungrounded neutral system. The value of R is so chosen such that the earth fault

current is limited to safe value but still sufficient to permit the operation of earth fault protection system. In practice, that value of R is selected that limits the earth fault current to 2 times the normal full load current of the earthed generator or transformer.

The following are the advantages of resistance earthing:

i)The earth fault current is small due to the presence of earthing resistance. Therefore, interference with communication circuits is reduced.

ii)It improves the stability of the system.

The following are the disadvantages of resistance grounding :

( i ) Since the system neutral is displaced during earth faults, the equipment has to be insulated for higher voltages.

(ii)This system is costlier than the solidly grounded system.

(iii)A large amount of energy is produced in the earthing resistance during earth faults. Sometimes it becomes difficult to dissipate this energy to atmosphere.

It is used on a system operating at voltages between 2.2 kV and 33 kV with power source capacity more than 5000 kVA.

( i ) In this system, the fault current required to operate the protective device is higher than that of resistance grounding for the same fault conditions.

Exp. (i) gives the value of inductance L of the arc suppression coil for resonant grounding.

The Peterson coil grounding has the following advantages:

(ii) The Peterson coil has the advantages of ungrounded neutral system.

The Peterson coil grounding has the following disadvantages :

( i ) Due to varying operational conditions, the capacitance of the network changes from time to time. Therefore, inductance L of Peterson coil requires readjustment.

(ii) The lines should be transposed.