Pattern making is art to learn and should be followed carefully. Pattern can be made by three main methods namely

Drafting is the system of drawing patterns on paper with mechanical precision on the basis of body measurements. A basic pattern should have a minimum number of darts and should fit the body comfortably without being tight or loose. Drafting can be done on ordinary brown paper which is not too thin. It can be done on thicker paper to be preserved for future use. Sometimes this is made on card board and used for many years. A sharp pencil, ruler, ‘L’ scale or set squares are needed to make a pattern with straight lines and smooth curves. The fol-lowing principles should be understood before starting to attempt drafting. This method is easy but requires some calcu-lation. Drafting has a set of instructions like “Draw a line AB measuring half waist round” which has to be followed to get the paper pattern (Figure 10.6). 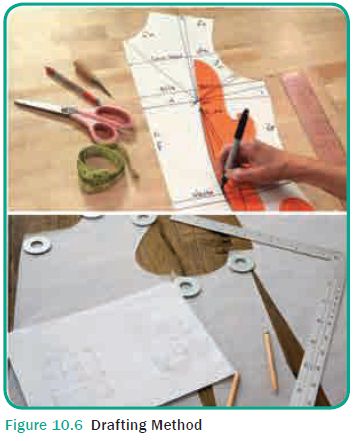 ·           Patterns should be made larger than the body size by adding ease allowance to the actual measurement. This gives the garment freedom of movement, ease, and comfort in wearing. Normally 5 cm allowance is given around the chest and 1 to 2.5 cm for other measurements.

·           For identical designs where the right and left side of the garment are same, only one side is needed to be made in paper. It can be reserved and copied for the opposite side.

·           It is better to draft the basic pattern block first then while cutting, seam allowances should be added to the pattern and markings should be made on the fabric.

The following construction detailed infor-mation should be recorded and marked clearly (Figure 10.7). 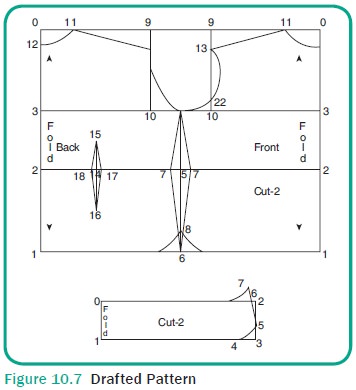 c.         If seam allowance is included in the draft. Seam lines and cutting lines should be clearly shown using blue and red pencil respectively.

d.       Straight grain or lengthwise line should be drawn on all patterns with a red pencil as shown (← →). This line indicates the direction in which the pattern has to be kept on the cloth so that it is parallel to the selvedge.

e.         Matching notches or balance marks should be provided along seams to show which seams are to be joined together.

f.         It is advantageous to cut outward notches at centre front and centre back of pattern pieces as it helps at the time of assembling the garment and stitching collars.

h.        Draping technique can be mastered by carefully following the instruc-tion and drawing the patterns in a systematic manner.

Toils and modeling are another common terms used to describe draping. Draping is the manipulation of fabric on a three dimensional form by a designer to obtain perfect fit and harmony between the fab-rics and design of the garment and the sil-houette of the individual. The material is modeled around a dress stand or human body to see the fit. It is checked, marked and then cut and finally stitched. There are several types of dress forms available in the market but the most commonly used ones are:

Adhesive paper dress forms are pre-pared for individual body measurements by pasting adhesive tapes over a correct fitting garment (Bannian) worn by the individual. The centre front, back, neck armscye, waist and hip lines are marked. The adhesive form is cut through care-fully without hurting the individual and rejoined and the edges are finished neatly with help of adhesive tapes. The dress form should be allowed to dry completely before use (Figure 10.8). 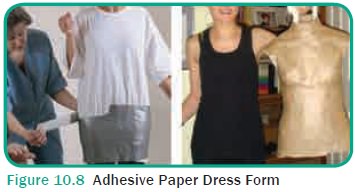 Muslin padded dress forms are similar to adhesive paper dress forms but they are made with muslin materials. The inner side of the dress form is padded, hence its stiffer. Padding helps to increase the usage and life of the dress form. This can be placed on a stand while draping and preparing the paper patterns. Later it is covered with a neat fabric and used when needed (Figure 10.9). 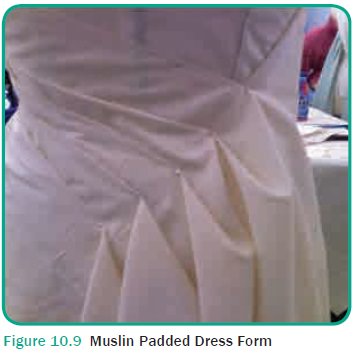 Paper mache or plastic molded dress forms are commercially made and sold for standard sizes. Even separate hand, leg dress form are available. It is costly but can be used for many years. These dress forms will not suit individual with figure irregularities (Figure 10.10). 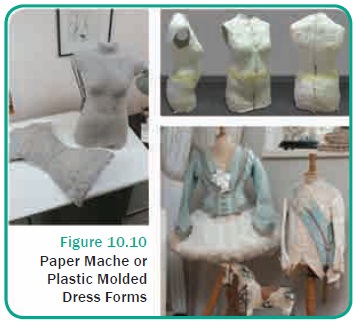 The method of preparing a pattern fol-lowing draping method is discussed below (Figure 10.11):

·           Beginners can first drape with fabric which is of similar texture and weight to the fabric, which is to be cut and sewed.

·           Drape the fabric on the dress form allow it to fall naturally. Check the grain of the fabric (lengthwise grain should match the centre front line). A number of experimental folds have to be made. Check for best design and drape. Pin the extra fabric. Do not cut.

·           Ensure the design and drape once again, so as to avoid cutting on wrong size or designs.

·           Draping should be done on a continu-ous line to give the best effect. This is possible only through practice. Hence before finalizing the design and pat-tern try draping in a number of ways.

·           Special care should be taken in case of checks and stripes. These fabrics can be draped on cross grain also for cre-ating design variation, especially for yoke or collar.

·           To decide on fullness, try 2 to 3 styles. Example, pin tucks, box pleats and gathers can be draped on the dress form and the best can be selected.

·           Once the design of the garment is final-ized pin the fabric on the dress form, match the centre front, back, shoulder, chest round lines to that in the dress form. Pin along the line.

·           Move the fingers slowly and make the dart and fullness needed and pin it. Care should be taken to maintain grain.

·           Name the pieces to avoid confussion. Fold the piece and keep them in a neat cover, if stitching is not being done immediately.

·           For identical design one side can be draped, marked and cut. The reverse of the cut patterns can be used for pre-paring the pattern for the other side.

·           Care should be taken to use minimum or fine pins especially for delicate fab-rics like silk.

·           Place weights or tape while draping design which requires more quantity of fabric. Examples: Wide neckline or side panels which are cut and gathered. Since the fabric drops down, weights can be placed inside these drapes or tapes should be used.

·           Trimming, buttons and other accesso-ries can be placed on draped fabrics to check its suitability with the fabric.

In spite of the cost, the method helps one to view the look of the finished garment; hence correction can be made even before cutting the patterns. It also involves more time and practices.

Commercial patterns were first developed in U.S.A. in 1950’s. Later patterns were developed for all age groups of both sexes. Commercial paper is made out of tissue butter papers for standard body mea-surements. Generally these patterns are marked for 5 sizes and packed in an enve-lope. Commercial patterns are produced by companies and sold. It is very popular in foreign countries. The pattern names, num-ber of pieces to be cut, grain, notches, cut-ting lines, stitching lines, darts and fullness are also marked. On the cover, a picture of the dress is shown. The size, cutting, sewing instructions are also mentioned. The body measurements are mentioned on the cover. This helps one to select the correct size. Dress modifications are given by some com-panies. The materials required, like ­buttons and accessories are also printed on the cover.

The major advantages of commer-cial patterns are good designs, with simple instructions. The pattern will have good fit when compared to other patterns but will need modification in case of irregular body structures. In India commercial pat-terns are not popular.