We commonly use the term ‘weight’ which is actually the ‘mass’. Many things are measured in terms of ‘mass’ in the commercial world.

We commonly use the term ‘weight’ which is actually the ‘mass’. Many things are measured in terms of ‘mass’ in the commercial world. The SI unit of mass is kilogram. In any case, the units are based on the items purchased. For example, we buy gold in gram or milligram, medicines in milligram, provisions in gram and kilogram and express cargo in tonnes.

Can we use the same instrument for measuring the above listed items? Different measuring devices have to be used for items of smaller and larger masses. In this section we will study about some of the instruments used for measuring mass. 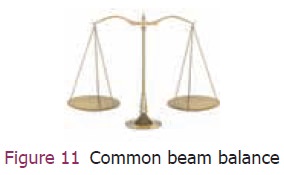 This type of balance is commonly used in provision and grocery shops (Figure 12). is balance compares the sample mass with the standard reference mass. The pans rest on top of the beam and can be conveniently placed on a table top. is balance can measure mass accurately upto 5 g. 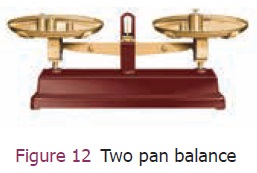 This balance is used in labs and is similar to the beam balance but it is a lot more sensitive and can measure mass of an object correct to a milligram (Figure 13). 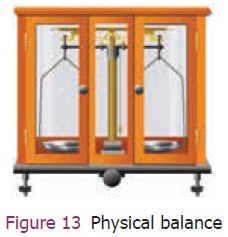 Nowadays for accurate measurements digital balances are used, which measures mass accurately even up to a few milligrams, the least value being 10 mg (Figure 14). is electrical device is easy to handle and commonly used in jewellery shops and labs. 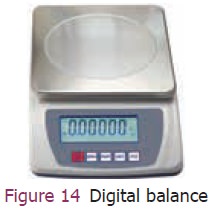 This balance helps us to find the weight of an object. It consists of a spring fixed at one end and a hook attached to a rod at the other end. It works by ‘Hooke’s law’ which explains that the addition of weight produces a proportional increase in the length of the spring (Figure 15). A pointer is attached to the rod which slides over a graduated scale on the right. The spring extends according to the weight attached to the hook and the pointer reads the weight of the object on the scale. 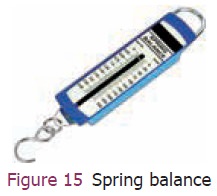 1. Difference between mass and weight

If a man has a mass 50 kg on the earth, then what is his weight? 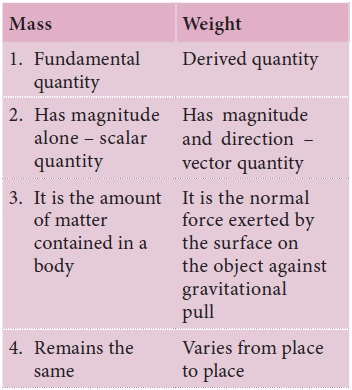 Acceleration due to gravity on the Moon = 1.63m/s2