The procedure of measuring time has undergone several changes from ancient period.

The teacher asks students to answer the following questions:

* How long do you take to walk one kilometer?

* What is the time taken for a cup of rice to be cooked?

* What is the cultivation period of groundnut?

These questions will help us to find the importance of time in our day-to-day life.

Now let us discuss the development of measures of time.

The procedure of measuring time has undergone several changes from ancient period. Initially, a stick in the sand was used to measure time by measuring the length of the shadow of that stick. Then horizontal and vertical plates were used as sundials to measure time between sunrise and sunset, that is in the day time. Firing of knotted ropes was used to measure time in the darkness. The approximate time taken for the fire to travel from one knot to other formed the part of night. In later days, a day was divided into 24 equal parts (hours) of which 12 hours were for daytime and 12 hours were for night time approximately.

Various clocks had been designed and used to measure time from different parts of world, like water clock, sun dial candle clock, sand clock, rope clock, etc . Have you seen those clocks? Look at the clocks shown below.

Study of devices that are measuring the time is called ‘HOROLOGY’.

Unit of Time: Today we are measuring time accurately. The units of time are second, minute, hour, day, week, month, year, etc. They are interrelated.

1. Read and write the time in the appropriate place.

Practise to say the time using "past"

Practise to say the time using "To"

Calculation of time to the nearest seconds is very essential in some situations like launching, rocket, running race, arrival and departure. So, we need to know the conversion of time.

Let us remember the time related chart as follows:

Example 12: A farmer ploughed the paddy field for 3 hours 35 minutes. How many minutes did he plough?

A satellite is placed in its orbit in 7 hours 16 minutes 20 seconds. Calculate it in seconds.

Solution: The satellite reaches its orbit in 7 hours + 16 minutes + 20 seconds

The satellite reaches its orbit in 26,180 seconds

Two cyclists took 5 hours 35 minutes 10 seconds and 8 hours to cover the same distance. Find the difference in time taken by them

3. Ordinary Time or the 12-Hour Format

4. Railway Time or the 24-Hour Format

Generally, we use 12 hour clock but Railways, Airways, Defence forces and Television networks use 24 hour clock to avoid morning or evening confusions. When you are in a railway station, you can hear the announcement and see the use of hours instead of a.m. and p.m, because they follow the 24 hour format. Therefore, there is no need to say morning and evening in their time. Railway time is usually denoted in 4 digits. The first two digits shows the hours and the last two digits shows the minutes. For example, 5 p.m is denoted as 17:00 hours. 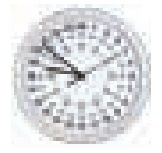 Let us observe the clock. Remember the following points while converting from one type of time to another type 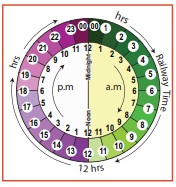 6. Duration between the two given time instances:

Find the duration between 6 a.m and 4 p.m

The arrival and departure timings of the Chennai − Trichy Express are given below.

(i) At what time does the train depart from Chennai Egmore to arrive at Trichy?

(ii) How long does it halt at Villupuram ?

It halts at Villupuram for 10 minutes.

(iii). How many halts are there in between Chennai and Trichy?

There are 3 halts (1) Chengalpattu (2) Villupuram (3) Virudhachalam

(iv). Find the total journey time of the train from Chennai to Trichy.

Hint: If the journey crosses the midnight, calculate the time duration from starting hours to midnight, then from midnight to arrival time.

The clock is set at 7 a.m. If the clock slows down two minutes every hour, find the time shown by the clock at 6 p.m.

A year is the time taken by the Earth to make one revolution around the Sun. A year has 12 months or 365 days. Each month is divided into weeks. A month has 4 weeks and a few more days. A week is of 7 days. A month has 30 days / 31 days except February. February has 28 or 29 days.

We know that the Earth revolves around the Sun as well as rotates to itself. The Earth takes 365 days 6 hours to make a complete revolution around the sun. We take 365 days as one year. To adjust 6 hours each year, we add one day to every fourth year (4 years 6 hours = 24 hours = 1 day). Every 4th year has 365 +1 day = 366 days and one day is added to the month of February. Therefore a year which has 366 days is called a Leap Year. In a Leap Year the month of February has 29 days. Every year you are celebrating birthday. If a person’s birthday falls on 29th February, he/she has to celebrate the birthday once in 4 years only.

How can we identify a leap year?

I. Generally a year which is divisible by 4 is considered as a leap year.

Why do we divide the centuries by 400 to find whether it is leap year or not? 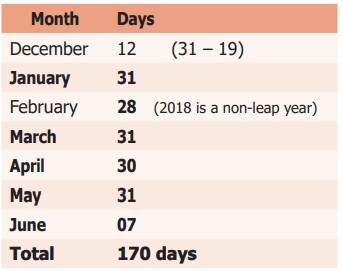 Required day is the second day after Wednesday.

Therefore 8th of june is Friday.

Convert in the format : YYYY/MM/DD 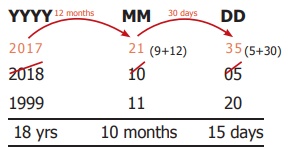 1. Collect some famous personalities whose birthday falls on 29th February.

2. Collect the interesting facts about Big Ben clock in London.

1. Check whether the following years are Ordinary or Leap Year ?

A Jubilee is a particular anniversary of an event.

Open the Browser and type the URL Link given below (or) Scan the QR Code. GeoGebra work sheet named “Measurement Unit convertor” will open. The work sheet contains three activities.

In the first activity move the sliders to change the value of kilometre, metre and centimetre and check the conversion.

In the second activity move the sliders to change the value of Kilogram, Gram and Milligram and check the conversion.

Browse in the link: