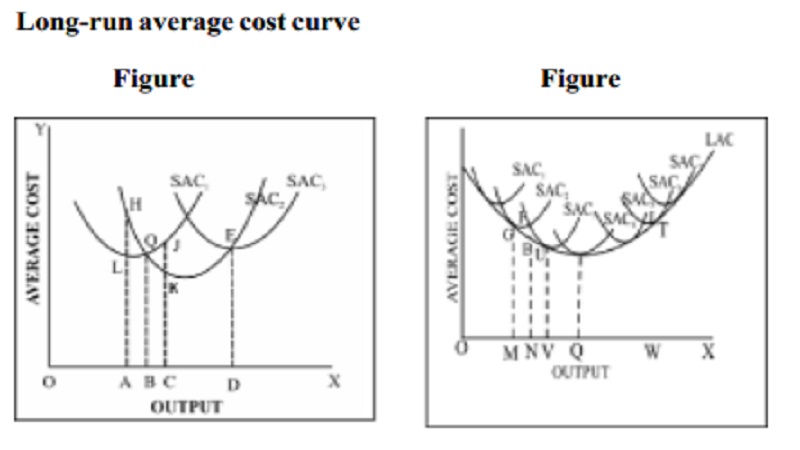 In the long-run all factors are variable. Therefore the firm can change the size of the plant (capital equipment, machinery etc) to meet the changes in demand.

In the long-run all factors are variable. Therefore the firm can change the size of the plant (capital equipment, machinery etc) to meet the changes in demand. A long-run average cost curve depicts the functional relationship between output and the long-run cost of production.

The Long run Average Cost (LAC) Curve is based on the assumption that in the long run a firm has a number of alternatives with regard to the scale of operations. For each scale of production or plant size, the firm has an appropriate short-run average cost (SAC) curve.

The pattern of these short-run average cost curves is shown in Figure . We have assumed that technologically there are only three sizes of plants - small, medium and large. SAC1 is relevant for a small size plant, SAC2 for a medium size plant and SAC3 for a large size plant. In the short period, when the output demanded is OA, the firm will choose the smallest size plant. But for an output beyond OB, the firm will choose medium size plant as the average cost of small size plant is higher for the same output (JC>KC). For output beyond OD, the firm will choose large size plant (SAC3). In the short-run, the firm is tied with a given plant but in the long-run, the firm moves from one plant to another. As the scale of production is changed, a new plant is added. The long-run cost of production is the least possible cost of production of any given level of output, when all inputs become variable, including the size of the plant. 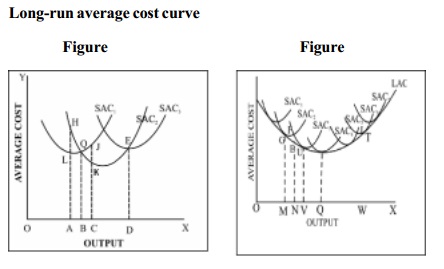