* To know about the structure and functions of rural and urban local bodies.

* To understand the special features of Panchayatraj.

* To know about the participation of women in local bodies.

* To know about the election of local body and will observe the forthcoming election.

Nandhini is in standard VI. It was her custom to read the headlines in the newspaper loudly to her parents Mr. Namburajan and Mrs. Manimegalai. They would clear her doubts. Sometimes, children from their neighbourhood would also join her and each one will read an article loudly. As it was a Saturday, Johnson, Maran and Anwar were also in Nandhini’s house. Nandhini started to read an article from the newspaper.

She was about to read the next heading, but she had a doubt and asked her father.

“Father, what is a corporation?”

“The Government of Tamil Nadu will declare certain municipalities based on population and high revenue. That’s how Nagercoil has to be declared as a corporation too”, said her father Namburajan.

“Oh, if that is so, are there other corporations that exist already?”

“Yes, there are twelve corporations in Tamil Nadu”, said Namburajan. 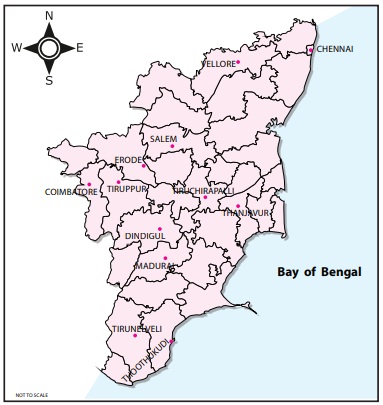 The Chennai Corporation which was founded in 1688 is the oldest local body in India. 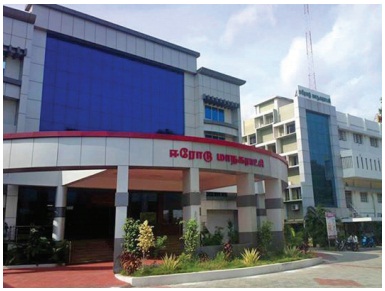 “Father, what about the place we live in” enquired Maran.

“We live in a Panchayat, Maran”.

“What is a Panchayat?”

“There are villages as well as cities in Tamil Nadu, aren’t there?”

“Won’t the needs of villages and cities differ? Our constitution has provided certain structures to fulfill the needs of the people.

“Oh, are there so many divisions?”

“Those areas which have a population of more than one lakh and a high amount of revenue and is found in the level below the City Municipal Corporation is called a Municipality.

• Kanchipuram District has the most number of municipalities.

“You mentioned something about towns”.

There is something special about the Town Panchayat. Can anyone tell me what is it?”, asked Namburajan. Everyone was gazing at him. But none answered.

“Well, I’ll tell the answer myself.

Tamil Nadu was the first state to introduce a town Panchayat in the whole of India”.

All were amazed on hearing it.

A City Municipal Corporation has a Commissioner, who is an Indian Administrative Service (IAS) officer. Government officials are deputed as Commissioners for the municipalities. The administrative officer of a Municipality is an Executive Officer (EO).

“You mentioned about Panchayats and Panchayat Unions”.

The Village Panchayats are the local bodies of villages. They act as a link between the people and the government. Villages are divided into wards based on their population. The representatives are elected by the people.

The services are provided on the Panchayat Union level.

Villupuram District has the highest number of Panchayat Unions (22), while The Nilgiris and Perambalur Districts have the lowest number (4).

The local bodies are governed by the representatives elected by the people. The constituencies are called wards. People elect their ward members.

“What are the benefits of local bodies, uncle?”

“There are many benefits. The services provided can be divided as obligatory functions and discretionary functions. These are provided by the local bodies.

Functions of the village Panchayat

Functions of the City Municipal Corporation

* Birth and Death registration, etc. “So, who does all these works?”

“As per the decisions taken in the city Hall meetings, the commissioner or officers  assign these works to their subordinate officers or other servants. Thus, they all work in various levels to get these public works done”.

“Will the Government provide funds for these services, father?”

Revenue of the Village Panchayat

Revenue of the City Municipal Corporation

• Distinguish between rural and urban revenue and functions.

• Find out from your home: The taxes paid by your family.

“How are the Grama Sabha meetings held, uncle?” asked Maran. 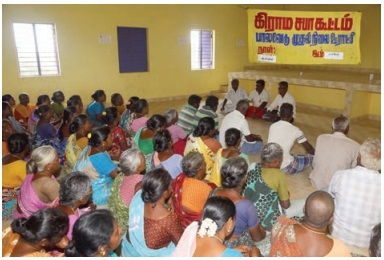 Those who have attained the age of 18 years and whose names are found in the electoral roll of the same Panchayat can take part in a Grama Sabha meeting. The Grama Sabha meetings are conducted four times a year. Officers like the District Collector, the Block Development Officer, teachers etc., also participate in this meeting. The people can freely express their needs and grievances”.

When are these meetings convened?

Apart from these days, the meetings can be convened as per need or during emergency.

The teacher guides the student to visit the Grama Sabha meeting.

“Mahatma Gandhi advocated Panchayat Raj as the foundation of India’s political system, as a form of government, where each village would be responsible for its own affairs. The Panchayat Raj Act was enacted on April 24, 1992”.

“Thank you very much, uncle. We really learnt a lot about local bodies”, said the children gratefully.

“I’m very happy that I could share so much with you today. That’s enough of reading newspapers. Go out and play now”, said Namburajan.

The children ran out to play joyously.

The Central Government gives awards to the best performing Village Panchayats. Find out if your village has received such awards.

Role of women in the Local Self Government

All local bodies have a reservation of 33% for women. In the 2011 Local Bodies election, 38% seats were won by women. As per the Tamil Nadu Panchayats(Amendment) Act, 2016, 50% reservation for women is being fixed in Panchayat Raj institutions.

Find out about the ward members of your area. Talk to the women members and discuss about their participation and experiences. 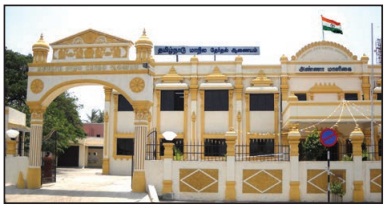 Do you think the above numbers are stable? Find out about the recent changes.

What is the number of votes cast by rural and urban voters in a local body election?

Why are there only 31 district panchayats, but 32 districts?

Works carried out by local bodies durings natural disasters and out break of diseases. 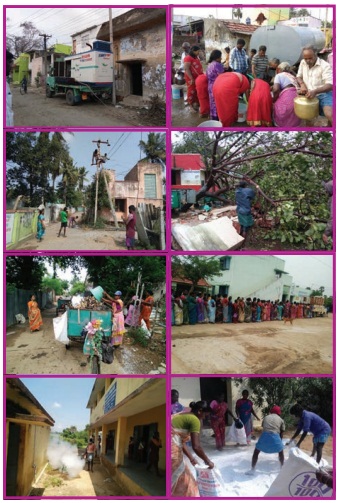 * Local bodies are structures to fulfill the needs of people.

* Grama Sabha is the only permanent unit in a village Panchayat.

* The election of local bodies take place in every five years.

Through this activity you will k aboutthe local body structure of India.

Step 2: Click the “panchayat Raj” to know about panchayat rules and acts.

Step 3: Click the “Scheme” to know about state and central schemes of panchayat raj.

Step 4: Click the “map” option to know how many panchayat raj in tamilnadu.