Listen to the passage about Nammazhwar, an environmental crusader from Tamil Nadu. As you listen, answer the following questions. The listening act can be repeated if required.

G. Listen to the passage about Nammazhwar, an environmental crusader from Tamil Nadu. As you listen, answer the following questions. The listening act can be repeated if required.

Nammazhwar was born in 1938 in Elangadu, Thanjavur District, and he graduated from Annamalai University with a B.Sc. in Agriculture. In 1963, he began working for the Agricultural Regional Research Station, a government organisation in Kovilpatti, as a scientist, conducting trials on spacing and use of various chemical fertilizers in cotton and millet crops. During his tenure there, the government had conducted various experiments in rain-fed land, using expensive inputs like hybrid seeds, chemical fertilizers and chemical pesticides which Nammazhwar considered futile as the farmers were resource poor. Based on his experience, he felt very strongly that it was imperative to totally reorient the research work being undertaken. But his peers at the institute paid little attention to his advice. Frustrated, he left the institute in 1969.

For the next 10 years, he was an agronomist for Island of Peace, an organisation founded by the Nobel Laureate Dominique Pire. His focus was on improving the standard of living through agricultural development in the Kalakad block of Tirunelveli District, Tamil Nadu. It was at this time that he realised that to get optimal results in farming, farmers should rely only minimally on external inputs. All inputs should come from within the farm. So called waste should be recycled and used as input. This revelation was a turning point in his life. He completely lost trust in conventional farming practices and began experimenting with sustainable agricultural methods.

Vegetables have a short lifespan compared to fruit crops. By making use of modern technologies and inputs, their lifespan can perhaps be extended to say about a year. But if there is a simple method of growing vegetables throughout the year, without any costly gadgets, modern technologies, or costly inputs, it is definitely worth a try for the farmers.

He advocated the ‘Bread sandwich’ method. In this method once the soil is made ready and the suggested practices followed, one need not work on the soil for the second time. They can go on sowing and reaping, all through the year.

He always said it was no use trying to teach a farmer. Instead, one should make the farmer understand the issue. He never stopped learning from them himself and had become a vast repository of farming practices and knowledge that he shared with whoever was interested. He never pushed ideas down anyone’s throat. Each farm is unique according to the farmers’ understanding and the conditions, Nammazhwar would say. He would keep experimenting with what he learned from the farmers, refined this knowledge and then gave it back to them.

He often said “Farming is not a way of producing crops to make money. It is a way of living, and a way of living that is possible even in the 21st century.” He trained hundreds of farm youths as trainers and helped many farmers to be master trainers—all this without the support of the government. 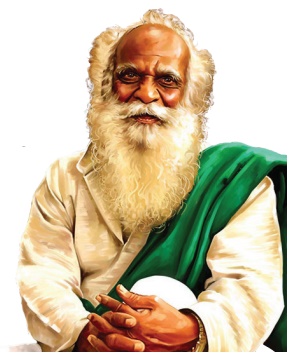 1. Who is Nammazhwar? What is his contribution to farmers and farming?

Nammazhwar was a graduate in agriculture. His contribution was that all inputs must come from within the form and the waste should be recycled and used as input.

2. In 1963 he worked for the Agricultural Regional Research Station, a government organization in kovilpatti, as as a scientist.

3. What was the turning point in the life of Nammazhwar?

The revelation of recycling the waste to be used as an output in farming was his turning point.

4. How is the “Bread sandwich method” a boon to the farmers?

The soil is made ready and the suggested practices followed without working on the soil for the second time. The farmers can go on sowing and reaping throughout the year. This is the boon to the farmers.

He never stopped learning from the farmers. He became a vast repository of farming practices and knowledge. He never pushed ideas down anyone's throat. According to the farmer's understanding and conditions each farm is unique.

Farming is not for making but a way of living and it is possible in the 21st century.

Synonyms of 'rely' is depend

Synonyms of sustainable is maintainable