After the completion of this unit students will be able to

• explain the structure of insects.

• know about animals active at night

Have you ever wondered why a dog drools on seeing food? Why cuckoo sings only during summer? Why baby birds open their mouths when the mother returns to the nest?

Each animal has some unique behaviour. Animal behaviour includes the activities of an animal and its interaction with other organisms. E.g. Blinking, eating, walking and flying.

Match the animals with their group behavior 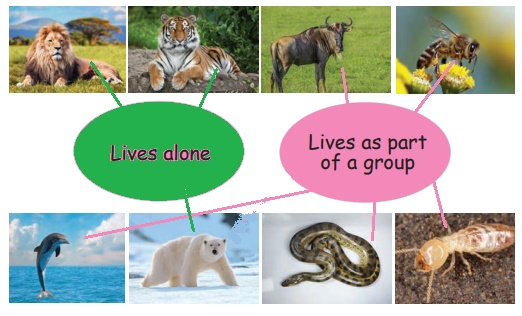 Animals gain a lot of benefits from spending time together with other members of the same species. This is called group behaviour. Animals like tiger, bear etc live in solitary (alone). Some animals live in small groups (E.g. Pride of a few lions) and some live as larger herd (E.g. Herd of thousands of wilde beest).

Some animals such as elephants, squirrels, rats and bats do dream during sleep. But cats, dogs and monkeys have longer dream time.

Group behaviour is also called social behaviour. Members of the group work together to find food, defend themselves and look after the young ones. E.g. All the fish in a school move together, following their leader in the front. Staying in a group helps the small fish appear big. The main purpose of group behaviour is to help animals survive in nature.

When insects live together, they often follow a hierarchy. E.g. Bees have one queen bee in every hive. There are a few male bees called drones. There are hundreds of female bees, which are the worker bees. 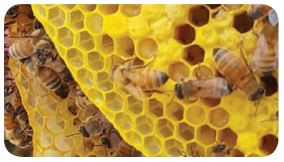 Birds are very different from each other. They live in different places, eat different foods and have different life styles. Some birds permanently live in groups while others come together only during the breeding season. Birds also live in groups and each bird‛s group has a different name. E.g. Flock of parrots, Stare of cranes.

Not all the bird species build nests. Some of them lay their eggs on the ground or in gap between rocks. Most of the birds build their own nests carefully like engineers. They build nests for their young ones. Some weave leaves, some use twigs, some build with thorns then pad it with soft materials.

Social weavers do not build individual nests. All males work together and build a common nest in which 400 birds can be housed.

Though green heron cannot swim, it stills eats fish from the water. How? It drops colourful leaves and fruits into the water. When the fishes pop out to investigate, the heron catches them.

Elephant group is called Herd or Parade. For each group there is a female head, which leads the group towards the availability of food, water and safety. The leader fights for their group. All animals in a group obey the command of their leader. Older animals teach manners and life skills to young ones. 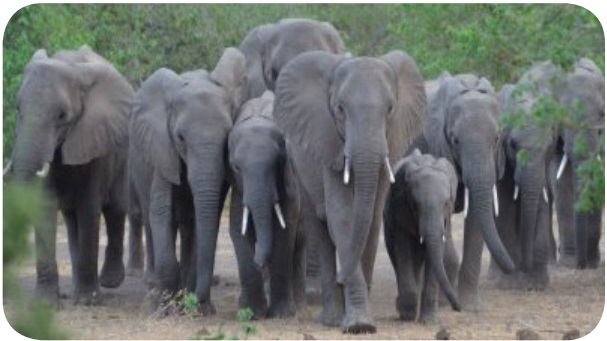 Advantages of Group behaviour in animals.

2. Taking care of young ones Example : Female elephant takes care of its calf.

Do You Know? Sea otters hold hands while they are sleeping, so they do not drift apart.

Adaptation is the most essential factor of all living beings. The changes in an animal‛s behaviour to adjust with its habitat is called adaptation. If an organism fails to adapt to the particular environment, its survival is difficult. 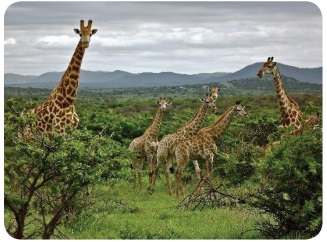 All animals have special body parts to live in a particular place at a particular time. E.g. Giraffes have developed very long necks because of their environmental demands.

Observe any animal in your surrounding and write a creative short story about it.

Some more examples of adaptations are given below.

Tigers and Zebras have lines so they can hide themselves

Camels have broad feet to walk in the desert.

Fish have gills to breathe in the water and fins to swim.

Elephants have long and large trunk to get their food in the forest.

There are three basic types of adaptations seen in animals. They are,

Changes in the physical features of the animal are called structural adaptations.

Changes in the functions of the animal‛s body are called physiological adaptations.

E.g. Dog shivers to generate more heat when it is cold and pants when it is hot.

Changes in the activities of the animal are behavioural adaptations.

• Porcupines have thorns on their body to fight against their enemies. 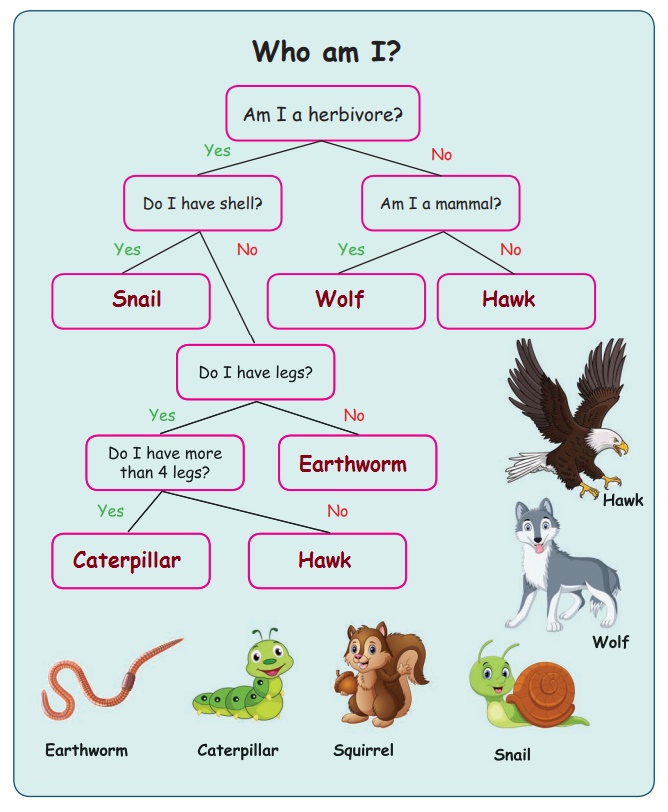 Insects have three main body regions. They are;

Head, thorax, and the abdomen. All parts of the insect are inside an exoskeleton. 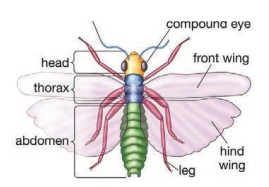 • Head: The main visible parts on the head are the large compound eyes, the antennae (feelers) and the mouth parts.

• Thorax: The thorax is the middle region of the body. It bears three pairs of legs and two pairs of wings.

Insects have differences in structures like wings, legs, antennae and mouthparts.

The legs are modified for walking, jumping, digging or swimming.

Most of the insects have wings which can be folded flat over their body. E.g. Bug There are some insects which cannot fold their wings. E.g. Dragonfly. Some insects are wingless. E.g. Silverfish.

The compound eyes of insects are made up of small units called ommatidia.

Fill in the missing words.

Butterfly has three body parts like all other insects the head, the thorax (chest), and the abdomen (bottom).

The butterfly has four wings and six legs, attached to the throax. Butterfly uses its two antennae to smell.

Special Senses in Ants and Bats

Ants have sense of sight, smell, taste and touch. Ants have organs of smell and taste in their antennae. They feel the vibrations in the ground through their feet. Ants have a good sense of smell.

• Place a few sugar cubes in a plate.

• After sometime, you can see some ants visiting the plate.

• Adding sugar to your cat‛s food is of no use, because cats cannot taste sweetness.

• Most snakes have poor eyesight. Snakes use their tongue to smell their surrounding.

Bats have a good sense of hearing. They use sound navigation. They produce ultrasonic sound which helps the bats find their way at night and find out the objects on their path. This is called “Echolocation”.

Some animals sleep in the day time and are very active at night. A good example is cat at your home. Not only small animals but also some birds are active at night. Such animals are called Nocturnal animals. E.g. Owl.

Lions are active both during day and night.

Some examples of nocturnal animals are given below. 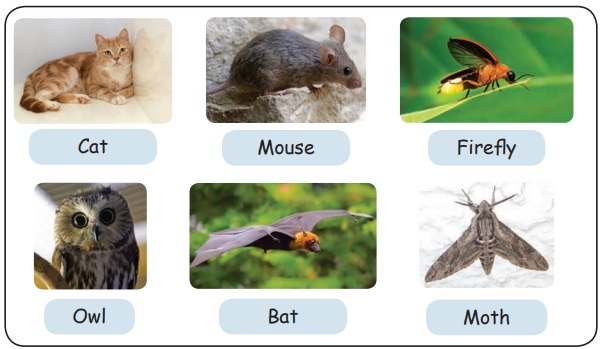 Kangaroo is best known for parental care. Female kangaroo carries its baby in its pouch. The pouch provides a safe place for the young ones to stay until they grow large enough to survive outside on their own. 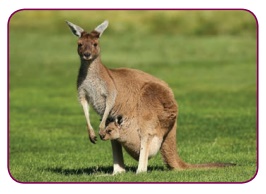 Cow gives milk and protects its calf from the enemies. Mother and calf communicate with each other through a sound. Calves respond to the calls from their own mother by calling back. 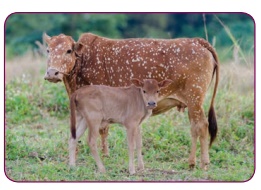 Humans promote and support the physical, emotional, social and intellectual development of their child. The human infant or baby is completely helpless at birth. Mother takes good care of the baby by feeding, helping to sleep and making comfortable with clothes etc. Through proper parenting the child is taught whatever needed to live successfully in the society.