Chapter: Java The Complete Reference : The Java Language : An Overview of Java

Now that you have seen several short Java programs, it is time to more formally describe the atomic elements of Java. Java programs are a collection of whitespace, identifiers, literals, comments, operators, separators, and keywords.

Now that you have seen several short Java programs, it is time to more formally describe the atomic elements of Java. Java programs are a collection of whitespace, identifiers, literals, comments, operators, separators, and keywords. The operators are described in the next chapter. The others are described next.

Java is a free-form language. This means that you do not need to follow any special indentation rules. For instance, the Example program could have been written all on one line or in any other strange way you felt like typing it, as long as there was at least one whitespace character between each token that was not already delineated by an operator or separator. In Java, whitespace is a space, tab, or newline.

Identifiers are used to name things, such as classes, variables, and methods. An identifier may be any descriptive sequence of uppercase and lowercase letters, numbers, or the underscore and dollar-sign characters. (The dollar-sign character is not intended for general use.) They must not begin with a number, lest they be confused with a numeric literal. Again, Java is case-sensitive, so VALUE is a different identifier than Value. Some examples of valid identifiers are

A constant value in Java is created by using a literal representation of it. For example, here are some literals:

Left to right, the first literal specifies an integer, the next is a floating-point value, the third is a character constant, and the last is a string. A literal can be used anywhere a value of its type is allowed.

In Java, there are a few characters that are used as separators. The most commonly used separator in Java is the semicolon. As you have seen, it is used to terminate statements. The separators are shown in the following table: 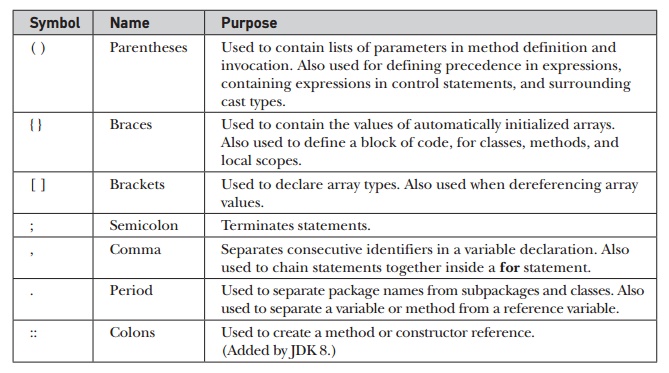 There are 50 keywords currently defined in the Java language (see Table 2-1). These keywords, combined with the syntax of the operators and separators, form the foundation

The keywords const and goto are reserved but not used. In the early days of Java, several other keywords were reserved for possible future use. However, the current specification for Java defines only the keywords shown in Table 2-1.

In addition to the keywords, Java reserves the following: true, false, and null. These are values defined by Java. You may not use these words for the names of variables, classes, and so on.