The concept of automated systems can be applied to various levels of factory operations. One normally associates automation with the individual production machines. However, the production machine itself made up of subsystems that may themselves be automated.

The concept of automated systems can be applied to various levels of factory operations. One normally associates automation with the individual production machines. However, the production machine itself 1~made up of subsystems that may themselves be automated. For example. one of tile important automation technologies we discuss in this pari of the book isnumcrical control (Chapter6).A modern numerical control (NC) machine tool is an automated system. However, the NC machine itself is composed of multiple control systems. Any NC machine has at least two axes of motion, and some machines have up to five axes. Each of these axes operates as a positioning system, as described in Section 3.1.3, and is, in effect, itself an automated system. Similarly, a NC machine is often part of a larger manufacturing system, and the larger system may itself be automated. For example, two or three machine tools may be connected by an automated pact handling system operating under computer control. The machine tools also receive instructions (e.g., part programs) from the computer. Thus we have three levels of automation and control included here (the positioning system level, the machine toollevel, and the manufacturing system level). For our purposes in this text, we can identify five possible levels of automation in a production plant. They are defined next, and their hierarchy is depicted in Figure 3.6.

Device level. This is the lowest level in our automation hierarchy. It includes the actuators, sensors, and other hardware components that comprise the machine level. The devices are combined into the individual control loops of the machine; for ex· ample, the feedback control loop for one axis of a CNC machine or one joint of an industrial robot. 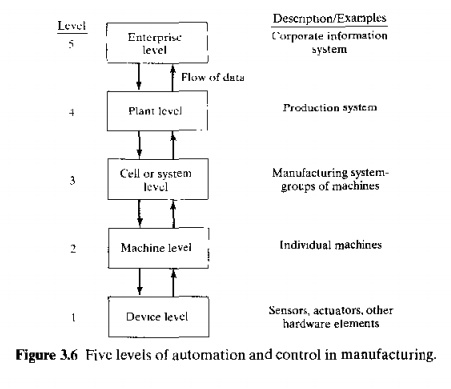 level include performing the sequence of steps in the program of instructions in the correct order and making sure that each step is properly executed.

Enterprise level. This is the highest level.consisting of the corporate information systern.It is concerned with all of the functions necessary to manage the company: marketing and sales, accounting, design, research, aggregate planning, and master production scheduling.

Most of the technologies discussed in this part of the book are at level 2 (the machine level), although we discuss level! automation technologies (the devices that make up a control system) in Chapter 5. The level 2 technologies include the individual controllers (e.g .. programmable logic controllers and digital computer controllersj.numerical controt machines. and industrial robots. The material handling equipment discussed in Part 11 abo represent technologies at level 2. although some of the handling equipment are themselves sophisticated automated systems. The automation and control issues at Jevel2 aTCconcerned         with the basic operation     of the equipment  and the physical  processes     they

The manufacturing systems in a factory arc components of a larger system, which we refer to as a production system. We define a production system as the people, equipment, and procedures that are organiz.ed for the combination of materials and processes that comprise a company's manufacturing operations. Production systems are at level 4, the plant level, while manufacturing systems are at level 3 in our automation hierarchy. Production systems include not only the groups of machines and workstations in the factory but also the support procedures that make them work. These procedures include production control, inventory control, material requirements planning. shop floor control. and quality control. These systems are discussed in Parts IV and V. They are often implemented not only at the plant level but also ar the corporate level (level S).