Legionella are inhaled into the lungfrom an aquatic source in the environment.

Legionella are inhaled into the lungfrom an aquatic source in the environment. Once there, they produce a destructive pneumonia marked by headache, fever, chills, dry cough, and chest pain. Although there may be multiple foci in both lungs and  extension to the  pleura, spread  outside  the  respiratory  tree  is very rare.

The widely publicized outbreak of pneumonia among attendees of the 1976 American Le-gion convention in Philadelphia led to the isolation of a previously unrecognized infec-tious agent, L. pneumophila. The event was unique in medical history; for months the American public had entertained theories of its cause that ranged from sabotage to vi-roids, only to find that a Gram-negative rod that could not be stained or grown by the common methods was responsible. It was an outstanding example of the benefits of pur-suing sound epidemiologic evidence until it is explained by equally sound microbiologic findings. We now know the disease had occurred for many years. Specific antibodies and organisms have been detected in material preserved from the 1950s, and a mysterious hospital outbreak in 1965 has been solved retrospectively.

In nature, Legionella species are ubiquitous in fresh water particularly in warm weather. In these sites they are also found as parasites of protozoa including numerous species of amoebae which appear to be the environmental reservoir. Transmission to humans is possible when the water supply of buildings becomes colonized and the system includes devices that create aerosols. Most outbreaks have occurred in or around large buildings such as hotels, factories, and hospitals involving cooling towers or some other part of the air-conditioning system. Some hospital outbreaks have implicated respiratory devices and potable water com-ing from parts of the hot water system such as faucets and shower heads. Legionella can per-sist in a water supply despite what appear to be adequate levels of chlorine particularly if the pipes contain abundant scale and/or dead end branches.

Person-to-person transmission has not been documented, and the organisms have not been isolated from healthy individuals. It is difficult to ascertain the overall incidence of Legionella infections; most information has been from outbreaks.Serologic surveysindi-cate that outbreaks constitute only a small part of the total cases, many of which currently go undetected. Estimates based on seroconversions suggest approximately 25,000 cases in the United States each year. Both serologic and environmental studies indicate that Le-gionella haslow virulenceforhumans.Theattackrateamongthose exposed isestimatedat less than 5% and most serious cases are in immunocompromised persons.

L. pneumophila is striking inits propensityto attackthe lung, producinga necrotizingmultifocal pneumonia. Microscopically, the process involves the alveoli and terminal bronchioles, with relative sparing of the larger bronchioles and bronchi (Fig 26 – 1). The inflammatory exudate contains fibrin, polymorphonuclear neutrophils (PMNs), macrophages, and erythrocytes. A striking feature is the preponderance of bacteria within phagocytes and the lytic destruction of inflammatory cells.

L. pneumophila is a facultative intracellular pathogen. Its pathogenicity depends on itsability to survive and multiply within cells of the monocyte – macrophage series. Inhaled Legionella bacteria reach the alveoli, where they enter alveolar macrophages utilizing mechanisms involving multiple molecules.

Inside the vacuole the bacteria continue to replicate by preventing phagosome-lysosome fusion and instead recruiting rough endoplasmic reticulum to the phago-some. The morphology of the replicative vacuole created is reflected in a process called coiling phagocytosis and is shown in Figure 26 – 2. L. pneumophila appears to accomplish this control of the phagocyte by use of a system that secretes proteins able to modulate host cell vesicle traffic. Other elements of the organism’s intracellular success include its ability to extract iron from intracellular transferrin and a peptide toxin that inhibits activation of the oxidative killing mechanisms of PMNs. Thus, in-stead of being killed by the bactericidal mechanisms of phagocytes L. pneumophila multiplies freely. Death of cells is also related to induction of programmed cell death and formation of a pore-forming toxin. The progression of intracellular events in free-living amoebae is remarkably similar to that in human alveolar macrophages. 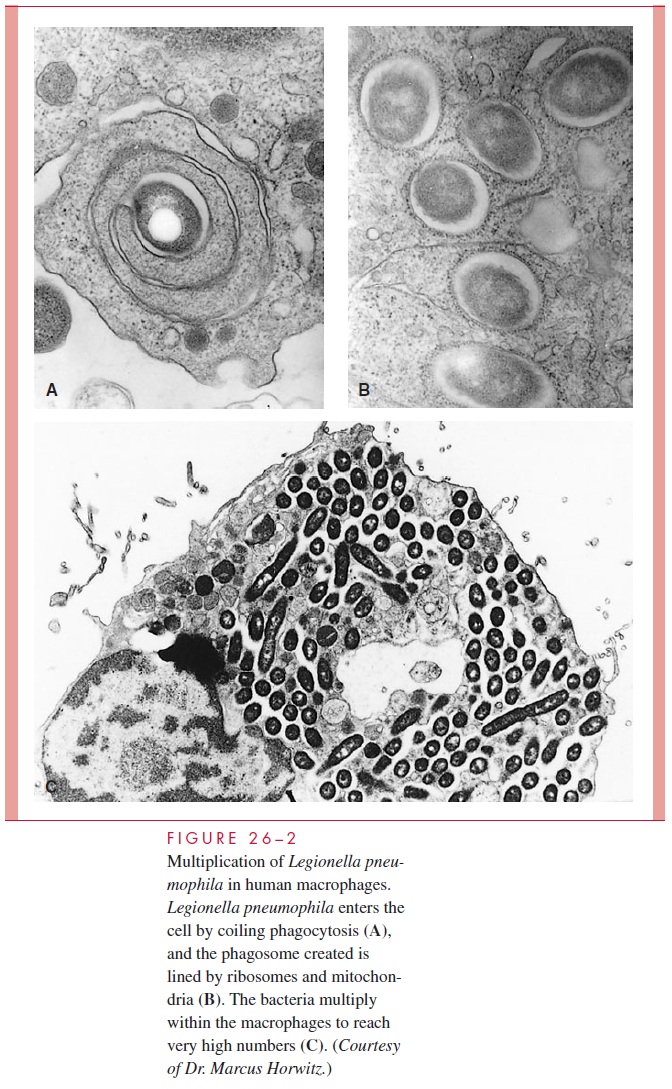 Just as intracellular multiplication is the key to L. pneumophila virulence, its inhibi-tion by cell-mediated mechanisms appears to be the most important aspect of immu-nity. Whether L. pneumophila is able to interfere with development of these responses is not known, but hypoexpression of major histocompatibility complex class I and II molecules has been observed in phagosomes containing the organisms. In immuno-competent persons cytokine-activated macrophages eventually inhibit intracellular multiplication and limit growth of Legionella. Most progressive cases of Legionnaires’ disease are in immunocompromised patients. The role of humoral immunity appears to be less important. In the presence of activated cellular immune responses antibody may play an ancillary role through enhancement of phagocytosis. It is unknown whether humans who have had Legionnaires’ disease are immune to reinfection and disease.