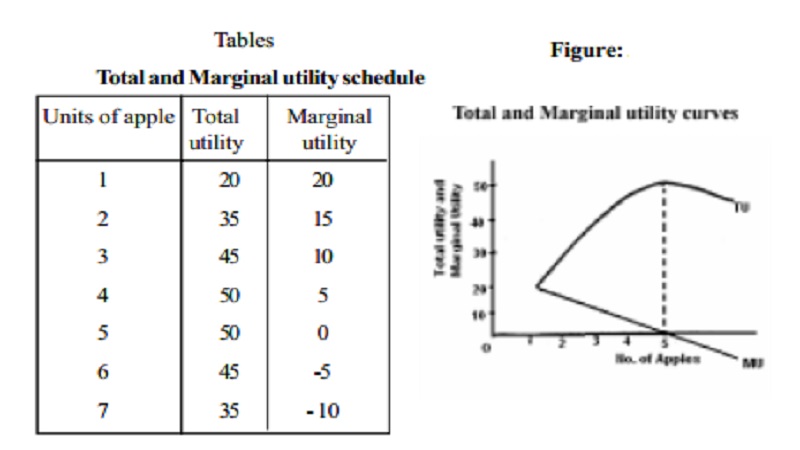 Gossen, Bentham, Jevons, Karl Menger contributed initially for the development of these ideas. But Alfred Marshall perfected these ideas and made it as a law. This Law is also known as Gossen's I Law.

Assumptions of the Law

2.        All the units of the commodity must be identical in all aspects like taste, quality, colour and size.

3.        The law holds good only when the process of consumption continues without any time gap.

4.        The consumer's taste, habit or preference must remain the same during the process of consumption.

6.        The prices of the commodity consumed and its substitutes are constant.

7.        The consumer is assumed to be a rational economic man. As a rational consumer, he wants to maximise the total utility.

Suppose Mr X is hungry and eats apple one by one. The first apple gives him great pleasure (higher utility) as he is hungry; when he takes the second apple, the extent of his hunger will reduce. Therefore he will derive less utility from the second apple. If he continues to take additional apples, the utility derived from the third apple will be less than that of the second one. In this way, the additional utility (marginal utility) from the extra units will go on decreasing. If the consumer continues to take more apples, marginal utility falls to zero and then becomes negative.

Above gives the utility derived by a person from successive units of consumption of apples.

Importance of Law of DMU

3.        This law is a handy tool for the Finance Minister for increasing tax rate on the rich.

4.        Producers are guided by the operation the Law of DMU, unconsciously. They constantly change the design, the package of their goods so that the goods become more attractive to the consumers and they appear as 'new goods'. Or else, the consumers would think that they are using the same commodity, over and over. In such a situation, the Law of DMU operates in the minds of the consumers. Demand for such commodities may fall.

The Law of DMU is criticised on the following grounds.

1.        Deriving utility is a psychological experience, When we say a unit of X gives ten units of utility, this means that utility can be measured precisely. In reality, utility cannot be measured. For example, when a person sees a film and says it is very good, we cannot measure the utility he has derived from it. However, we can measure utility indirectly by the cinema fare he is willing to pay.

3.        According to the Law, a consumer should consume successive units of the same good continuously. In real life it is not so.

5.        As utility itself is capable of varying from person to person, marginal utility derived from the consumption of a good cannot be measured precisely.