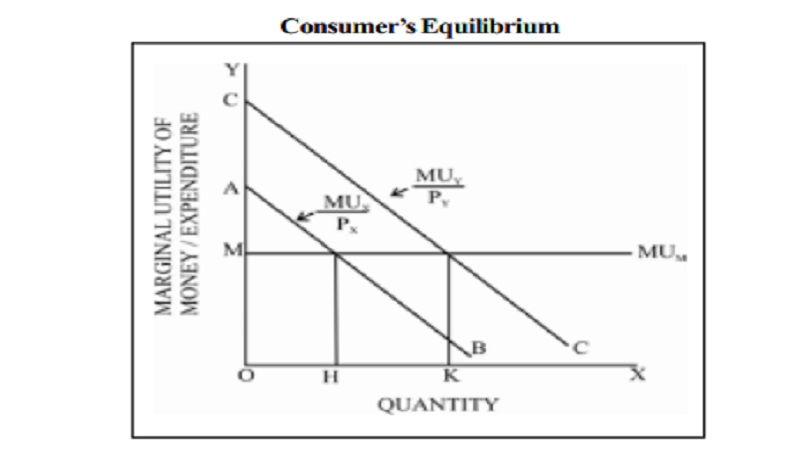 The idea of equi-marginal principle was first mentioned by H.H.Gossen (1810-1858) of Germany. Hence it is called Gossen's second Law. Alfred Marshall made significant refinements of this law in his 'Principles of Economics'.

1.        The consumer is rational so he wants to get maximum satisfaction.

6.        The law is based on the law of diminishing marginal utility.

Explanation of the law

Suppose there are two goods X and Y on which a consumer has to spend a given income. The consumer being rational, he will try to spend his limited income on goods X and Y to maximise his total utility or satisfaction. Only at that point the consumer will be in equilibrium.

According to the law of equi-marginal utility, the consumer will be in equilibrium at the point where the utility derived from the last rupee spent on each is equal. 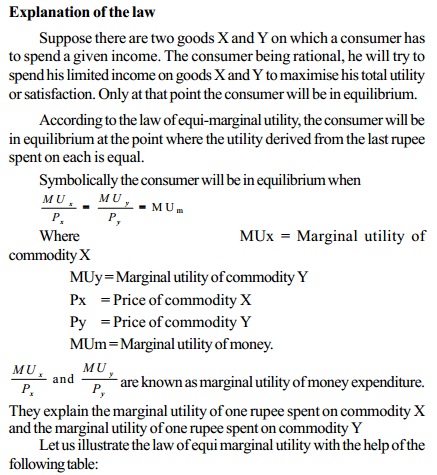 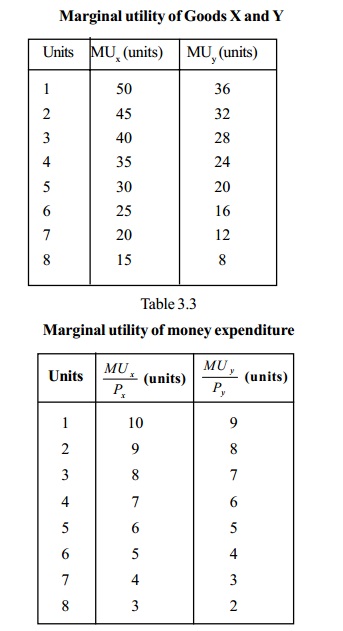 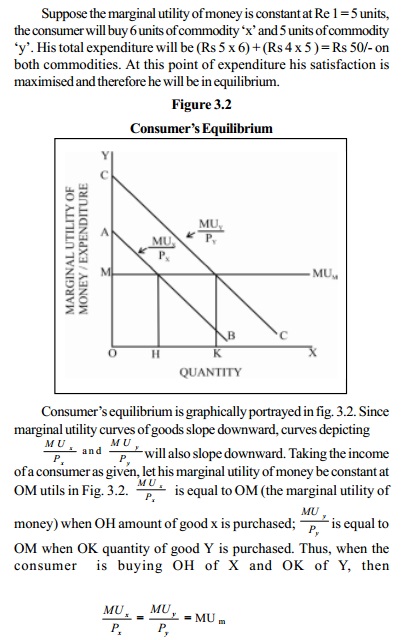 Limitations of the Law

The law of equi-marginal utility bristles with the following difficulties.

The theory is weakened by the fact that many commodities like a car, a house etc. are indivisible. In the case of indivisible goods, the law is not applicable.

2. The Marginal Utility of Money is Not Constant

The theory is based on the assumption that the marginal utility of money is constant. But that is not really so.

3. The Measurement of Utility is not Possible

Marshall states that the price a consumer is willing to pay for a commodity is equal to its marginal utility. But modern economists argue that, if two persons are paying an equal price for given commodity, it does not mean that both are getting the same level of utility. Thus utility is a subjective concept, which cannot be measured, in quantitative terms.

In conclusion, we may say all prudent and rational persons are expected to act upon the law consciously or unconsciously. As Chapman puts it,

'We are not, of course compelled to distribute our incomes according to the law of substitution or equi-marginal expenditure, as a stone thrown into the air is compelled, in a sense to fall back to the earth, but as a matter of fact, we do in a certain rough fashion, because we are reasonable.'

According to Marshall, 'the applications of this principle extend over almost every field of economic activity.'

1. It applies to consumption

2. It applies to production

The aim of the producer is to get maximum output with least-cost, so that his profit will be maximum. Towards this end, he will substitute one factor for another till

3. Distribution of Earnings Between Savings and Consumption

4. It applies to distribution

5. It Applies to Public Finance

The principle of 'Maximum Social Advantage' as enunciated by Professors Hicks and Dalton states that, the revenue should be distributed in such a way that the last unit of expenditure on various programmes brings equal welfare, so that social welfare is maximised.

Prof. Boulding relates Marshall's law of equi-marginal utility to the expenditures of limited time, i.e. twenty-four hours. He states that a person should spend his limited time among alternative uses such as reading; studying and gardening, in such a way that the marginal utility from all these uses are equal.