• To know the landforms which are created by river

• To describe the landforms which are created by glacial action

• To classify the landforms which are produced by wind action

• To identify the various landforms about sea wave

• To compile the landforms which are produced by the work of a river, glacier, wind and sea waves

In the earlier class, we have learnt that the surface of the earth is not the same everywhere. The earth has an infinite variety of landforms named mountains, plateaus, plains, valley etc., Some parts of the lithosphere may be rugged and some flat. These landforms are a result of two processes – the endogenic process and the exogenic process. The endogenic process (internal process) leads to the upliftment and sinking of the earth’s surface at several places. The exogenic process (external process) is the continuous wearing down and rebuilding of the land surface.

Gradation is the process of levelling of highlands through erosion and filling up of lowlands through deposition.

The landscape is being continuously worn away by two processes – weathering and erosion. Weathering is the breaking and falling apart into small pieces of the rocks on the earth’s surface. Erosion is the wearing away of the landscape by different agents like water, wind, ice and sea waves. The eroded material is carried away by water, wind, etc. and eventually deposited. This process of erosion and deposition create different landforms on the surface of the earth.

The water flowing from its source to river mouth, along a definite course is called a River. Rivers generally originate from a mountain or hill.

The place of origin of the river is known as its Source. The place where it joins a lake or sea or an ocean is known as the River mouth.

The running water in the river erodes the landscape, which creates a steep-sided valley like the letter ‘V’ known as ‘V’ shaped valley. 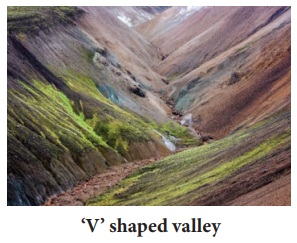 Tributary: A stream or river that flows into and joins a main river.

Distributary: A stream that ranches off and flows away from a main stream. 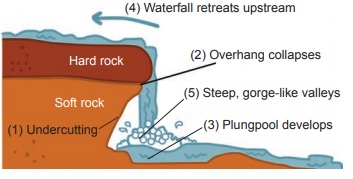 Falling of river water over a vertical step in the river bed is called waterfall. It is formed when the soft rocks are removed by erosion. E.g. Coutrallam falls across the river Chittar in Tamil Nadu.

The highest waterfall is Angel Falls of Venezuela in South America. The other waterfalls are Niagara Falls located on the border between Canada and USA in North America and Victoria Falls on the borders of Zambia and Zimbabwe in Africa.

Plunge pool is a hollow feature at the base of a waterfall which is formed by cavitation. Alluvial fan is a deposition of sediment occurs at which the river enters a plain or the foot-hills. 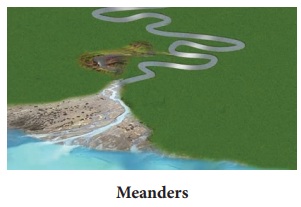 As the river enters the plain it twists and turns forming large bends known as Meanders. Eg. Meanders along the River Vellar near Sethiyathope in Cuddalore District, Tamil Nadu. 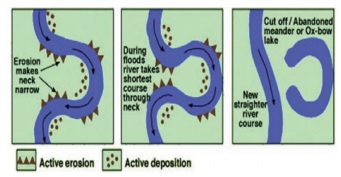 The term ‘Meander’ has been named on the basis of Meander River of Asia Minor (Turkey), it flows through numerous curves and turns.

As the river approaches the sea, the speed of the flowing water decreases and the river begins to break up into a number of streams called distributaries. The velocity of the river becomes so slow that it begins to deposit its load. Each distributary forms its own mouth. The collection of sediments from all the mouths form Delta. Deltas are excellent productive lands. They have more minerals which favour cultivation. E.g. Cauvery delta, Ganges delta, Mississippi delta. 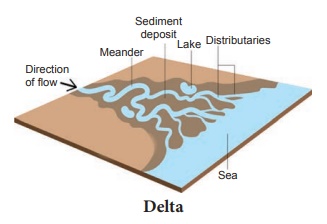 Activity: Find out the names of a few rivers of the world that form a delta with the help of the Atlas.

A large body of ice moving slowly down a slope or valley due to gravity is called a glacier. Glaciers are grouped into Mountain or Valley Glaciers and Continental Glaciers.

Mountain or Valley Glacier is a stream of ice, flowing along a valley. It usually follows former river courses and are bounded by steep sides. E.g. The Himalayas and the Alps.

Glaciers erode the landscape by levelling soil and stones to expose the solid rock below. Cirque is a glacially eroded rock basin, with a steep side wall and steep head wall, surrounding an armchair-shaped depression. E.g. Corrie – Scotland (United Kingdom), Kar – Germany. 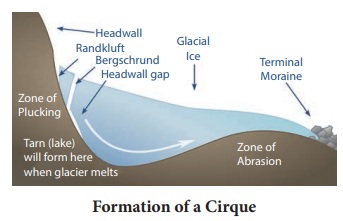 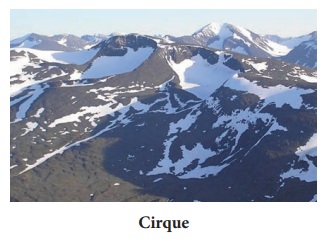 As the ice melts, they get filled up the cirque with water and become beautiful lakes in the mountains called as Tarn Lake. When two adjacent cirques erode towards each other, the previously rounded landscape is transformed into a narrow rocky, steep – sided ridge called Aretes. 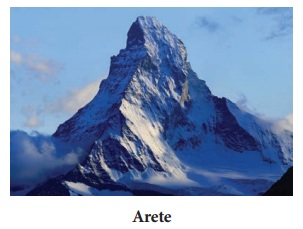 U’ Shaped Valley is found beneath the glaciers which is deepened and widened by the lateral and vertical erosion. The material carried by the glacier such as rocks - big and small, sand and silt get deposited. These deposits form glacial moraines. 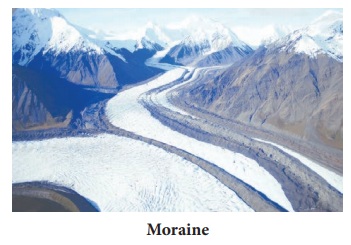 Have you ever visited a desert? Try to collect some pictures of sand dunes. An active agent of erosion and deposition in the deserts is wind. In deserts you can see rocks in the shape of a mushroom, commonly called mushroom rocks. 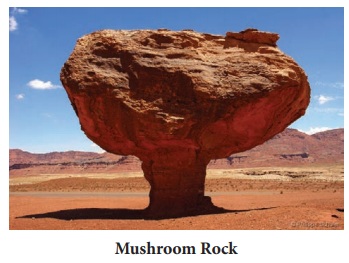 Winds erode the lower section of the rock more than the upper part. Therefore, such rocks have narrower base and wider top. An isolated residual hill, standing like a pillar with rounded tops are called Inselbergs. E.g. Inselberg in the Kalahari Desert of South Africa. 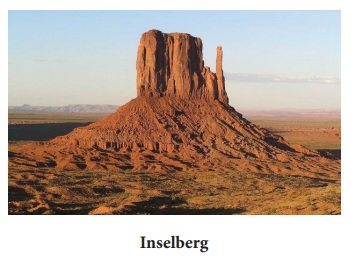 When the wind blows, it lifts and transports sand from one place to another. When it stops blowing the sand falls and gets deposited in low hill – like structures. These are called sand dunes. The crescent shaped sand dunes are called Barchans. 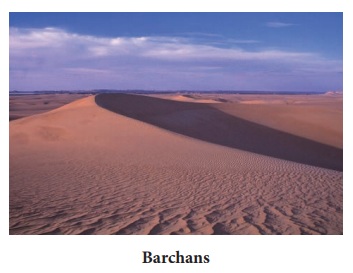 When the grains of sand are very fine and light, the wind can carry it over very long distances. When such sand is deposited in large areas, it is called Loess. Large deposits of loess are found in China. 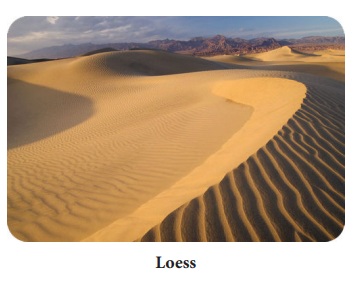 Northern China loess deposits are brought from the Gobi Desert.

A part of the land adjoining or near the sea is called the Sea coast. The boundary of a coast, where land meets water is called the Coast line. The coastal areas are subject to change due to wave erosion and wave deposition. 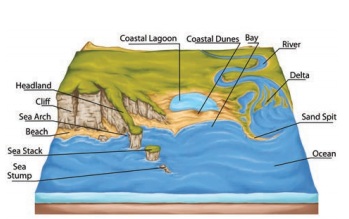 The erosion and deposition of the sea waves give rise to coastal landforms. Sea Cliffs are steep rock faces formed, when the sea waves dash against them. Sea waves continuously strike at the rocks. Cracks develop. Over time they become larger and wider. Thus, hollow like caves are formed on the rocks. They are called Sea Caves. 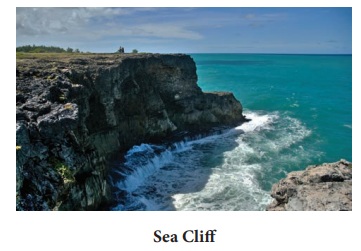 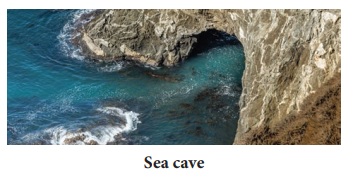 As the cavities of sea caves become bigger and bigger only the roof of the caves remains, thus forming Sea Arches. Further, erosion breaks the roof and only walls are left. These walllike features are called Stacks. 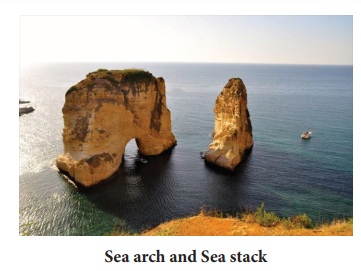 The sea waves deposit sediments of sand and gravel along the shores forming Beaches. Sand bar is an elongated deposition of sand or mud found in the sea, almost parallel to the coast. 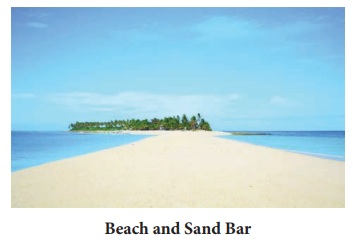 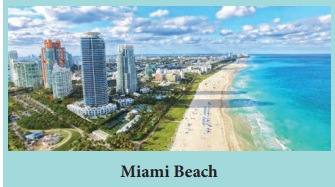 Lagoon is a shallow stretch of water  partially Lagoon or completely is a separated from the sea. E.g. Chilka lake in Odisha, Pulicat lake in Tamil Nadu and Andhra Pradesh and Vembanad lake in Kerala are the famous lagoons in India. 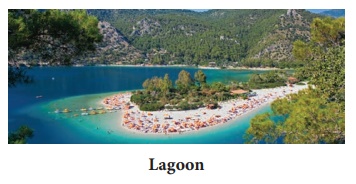 • The landscape is being continuously worn away by weathering and erosion.

• River, glacier, wind and sea waves are the major agents of exogenic forces.

• From its source to its mouth, the river is constantly reshaping the land and giving rise to different landforms.

• The river begins to break up into a number of streams called distributaries.

• Deltas are excellent productive lands which have more minerals.

• Glacier is large body of ice moving slowly down a slope due to gravity.

• Wind is the active agent of erosion and deposition in deserts.

• The sea waves deposit sediments of sand and gravel along the shores forming beaches.

1. Gradation: The process of leveling of highlands through erosion and filling up of lowland through deposition. சமநிலைப் படுத்துதல்

2. Weathering: Breaking and crumbling up of rocks on the earth’s surface. பாறைச் சிதைவு

3. River mouth: The place where the river joins a lake or an ocean. ஆற்று முகத்துவாரம்

4. Tributary: A stream or river that flow into and joins a main river. துணை ஆறு

5. Cavitation: Intense erosion due to the surface collapse of air bubbles found in rapid flow of water. குழிவு

7. Delta: The large of sediments a fan shaped by river deposition ஆற்றுக் கழிமுகம்

10. Lagoon: A shallow stretch of water partially separated from the sea. காயல்

Step – 1 Open the Browser and type the URL given below (or) Scan the QR Code.

Step - 2 Go to menu and select any types of land (Ex. Glacier)