Journey by Train: Section I

This extract is taken from the classic adventure novel, Around the World in Eighty Days by Jules Verne. An Englishman, Mr. Phileas Fogg, along with his French attendant, Passepartout, attempts to go round the world in eighty days on a wager of $20,000 (roughly $1.6 million today) set by his friends at the Reform Club.

Read this extract, where Phileas Fogg travels through some parts of India at a time when the railways were being built in the country.

Some places are spelt differently as the book was written over a century ago. 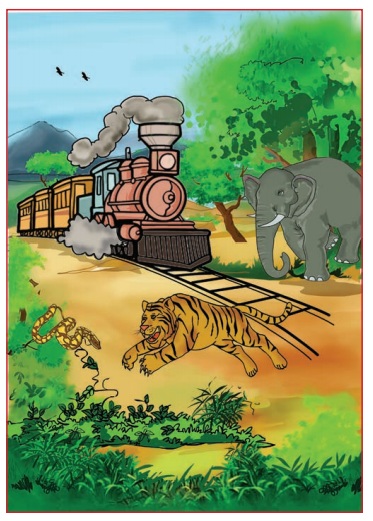 The train had started punctually. Among the passengers were a number of officers, Government offi cials and merchants. Passepart out rode in the same carriage with Mr.Fogg, and a third passenger occupied a seat opposite to them. This was Sir Francis Cromarty, one of the friends Mr. Fogg made on the ship Mongolia that brought him to Bombay.

An hour after leaving Bombay the train had passed the bridges and the Island of Salcette, and had got into the open country.

During the night the train left the mountains behind, and passed Nassik, and the next day proceeded over the fl at, well-cultivated country of the Khandesh, with its straggling villages, above which rose the towers of temples. This fertile territory is watered by many small rivers and clear streams, mostly tributaries of the Godavari.

Passepartout, on waking and looking out, could not believe that he was actually crossing India in a railway train. The locomotive, guided by an English engineer and fed with coal, threw out its smoke upon cotton, coffee, nutmeg, clove, and pepper plantations, while the steam curled in spirals around groups of palm-trees, in the midst of which were seen attractive bungalows, viharas (sort of abandoned monasteries), and marvellous temples decorated by the rich work of Indian architecture. Then they came upon vast areas extending to the horizon, with jungles where snakes and tigers lived. These creatures fled at the noise of the train. Then they came to forests where elephants stood gazing with sad eyes at the train as it passed.

At half-past twelve the train stopped at Burhampoor. The travellers made a hasty breakfast and started off for Assurghur. Now they travelled along the banks of the small river Tapty, which empties into the Gulf of Cambray, near Surat.

Then towards evening the train entered the valleys of the Sutpour Mountains, which separate the Khandeish from Bundelcund. It was three in the morning.

Travelling improves memory and reduces the risk of heart diseases. It makes us more intelligent and happier. This has been proved by scientists.

Give a picturesque view through which the train travels.