The train stopped, at eight o’clock, in the midst of a clearing some fi fteen miles beyond Rothal, where there were several bungalows, and workmen’s cabins.The conductor, passing along the carriages, shouted, ‘Passengers will get out here!’

Phileas Fogg looked at Sir Francis Cromarty for an explanation; but the general could not tell why there was a halt in the midst of this forest of dates and acacias. 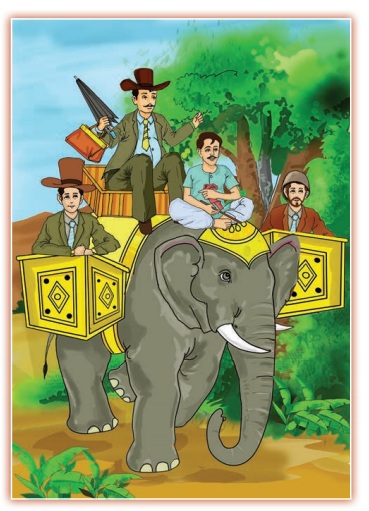 ‘What do you mean?’ asked Sir Francis

‘I mean to say that the train isn’t going to go any futher.’

The general at once stepped out, while

Phileas Fogg calmly followed him, and they proceeded together to the conductor.

‘Where are we?’ asked Sir Francis.

‘At the hamlet of Kholby .’

‘No. There’s still a matter of fi fty miles to be laid from here to Allahabad, where the line begins again.’

‘But the papers announced the opening of the railway throughout.’

‘What can I tell you, offi cer? The papers were mistaken.’

‘Yet you sell tickets from Bombay to Calcutta,’ snapped Sir Francis, who was growing angry.

‘No doubt,’ replied the conductor; ‘but the passengers know that they must provide means of transportation for themselves from Kholby to Allahabad.’

Sir Francis was furious. Passepartout would willingly have knocked the conductor down, and did not dare to look at Mr.Fogg.

‘Sir Francis,’ said Mr. Fogg quietly, ‘we will, if you please, look about for some means of transport to Allahabad.’

‘Mr. Fogg, this is a delay greatly to your disadvantage.’

‘Not at all; but I knew that some obstacle or other would sooner or later arise on my route. Nothing, therefore, is lost.

I have two days, which I have already gained, to sacrifice. A steamer leaves Calcutta for Hong Kong at noon, on the 25th. This is the 22nd, and we shall reach Calcutta in time.’

Agra is one of the most visited destinations in India. The main reason is the Taj Mahal. Agra also has other attractions, like the Agra Fort, the Sikandra Fort, Akbar’s tomb and many other tourist spots.

1. Why did the train stop in the middle of the forest?

Answer: The train stopped in the middle of the forest as there were no railroad lines beyond that place.

2. Why was Sir Francis angry?

Answer: There were no railroad lines from Kholby to Allahabad. But the tickets were sold from Bombay to Calcutta. So Sir Francis was angry.