Java is a programming language originally developed by James Gosling at Sun Microsystems. Java applications are typically compiled to byte code (class file) that can run on any Java Virtual Machine (JVM) regardless of computer architecture.

•       Java is a programming language originally developed by James Gosling at Sun Microsystems. Java applications are typically compiled to byte code (class file) that can run on any Java Virtual Machine (JVM) regardless of computer architecture.

•       It is intended to let application developers "write once, run anywhere". Java is general-purpose, concurrent, class-based, and object-oriented language.

‖ There is no special keyword designating a variable as local; that determination comes entirely from the location in which the variable is declared — which is between the opening and closing braces of a method.

Local variables are only visible to the methods in which they are declared; they are not accessible from the rest of the class.

Objects store their individual states in "non-static fields", that is, fields declared without the static keyword.

Non- static fields are also known as instance variables because their values are unique to each instance of a class (to each object, in other words

A class variable is any field declared with the static modifier; this tells the compiler that there is exactly one copy of this variable in existence, regardless of how many times the class has been instantiated.

•   Operators are special symbols that perform specific operations on one, two, or three operands, and then return a result. 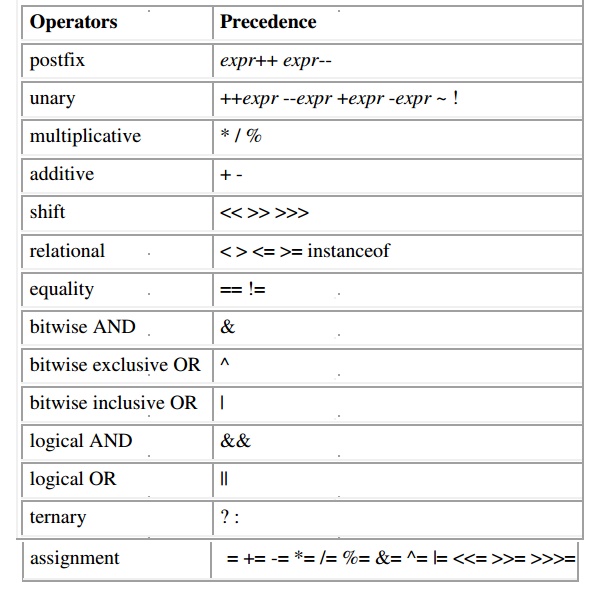 •       The following program, InstanceofDemo, defines a parent class (named Parent), a simple interface (named MyInterface), and a child class (named Child) that inherits from the parent and implements the interface.

When using the instanceof operator, keep in mind that null is not an instance of anything.

‖ The statements inside source files are generally executed from top to bottom, in the order that   they appear.

Control flow statements, however, break up the flow of execution by employing decision making, looping, and branching, enabling your program to conditionally execute particular blocks of code.

•       The Control Flow Statements are decision-making statements (if-then, if-then-else, switch), the looping statements (for, while, do-while), and the branching statements (break, continue, return) supported by the Java programming language.