Python programming language has four collections of data types such as List, Tuples, Set and Dictionary.

Python programming language has four collections of data types such as List, Tuples, Set and Dictionary. A list in Python is known as a “sequence data type” like strings. It is an ordered collection of values enclosed within square brackets [ ]. Each value of a list is called as element. It can be of any type such as numbers, characters, strings and even the nested lists as well. The elements can be modified or mutable which means the elements can be replaced, added or removed. Every element rests at some position in the list. The position of an element is indexed with numbers beginning with zero which is used to locate and access a particular element. Thus, lists are similar to arrays, what you learnt in XI std.

In python, a list is simply created by using square bracket. The elements of list should be specified within square brackets. The following syntax explains the creation of list.

In the above example, the list Marks has four integer elements; second list Fruits has four string elements; third is an empty list. The elements of a list need not be homogenous type of data. The following list contains multiple type elements.

Python assigns an automatic index value for each element of a list begins with zero. Index value can be used to access an element in a list. In python, index value is an integer number which can be positive or negative. 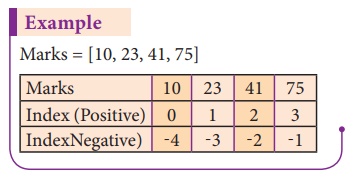 Positive value of index counts from the beginning of the list and negative value means counting backward from end of the list (i.e. in reverse order).

print (List_Variable[index of a element])

In the above example, print command prints 10 as output, as the index of 10 is zero.

Note: A negative index can be used to access an element in reverse order.

Loops are used to access all elements from a list. The initial value of the loop must be zero. Zero is the beginning index value of a list.

In the above example, Marks list contains four integer elements i.e., 10, 23, 41, 75. Each element has an index value from 0. The index value of the elements are 0, 1, 2, 3 respectively. Here, the while loop is used to read all the elements. The initial value of the loop is zero, and the test condition is i < 4, as long as the test condition is true, the loop executes and prints the corresponding output.

During the first iteration, the value of i is zero, where the condition is true. Now, the following statement print (Marks [i]) gets executed and prints the value of Marks [0] element ie. 10.

The next statement i = i + 1 increments the value of i from 0 to 1. Now, the flow of control shifts to the while statement for checking the test condition. The process repeats to print the remaining elements of Marks list until the test condition of while loop becomes false.

The following table shows that the execution of loop and the value to be print. 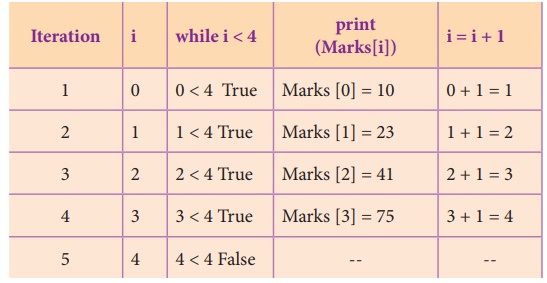 Python enables reverse or negative indexing for the list elements. Thus, python lists index in opposite order. The python sets -1 as the index value for the last element in list and -2 for the preceding element and so on. This is called as Reverse Indexing.

Example : Program to display elements in a list using loop

In Python, the for loop is used to access all the elements in a list one by one. This is just like the for keyword in other programming language such as C++.

for x in Marks:

In the above example, Marks list has 5 elements; each element is indexed from 0 to 4. The Python reads the for loop and print statements like English: “For (every) element (represented as x) in (the list of) Marks and print (the values of the) elements”.

In Python, the lists are mutable, which means they can be changed. A list element or range of elements can be changed or altered by using simple assignment operator (=).

List_Variable [index of an element] = Value to be changed

List_Variable [index from : index to] = Values to changed

Where, index from is the beginning index of the range; index to is the upper limit of the range which is excluded in the range. For example, if you set the range [0:5] means, Python takes only 0 to 4 as element index. Thus, if you want to update the range of elements from 1 to 4, it should be specified as [1:5].

for x in MyList:

for y in MyList:

for x in MyList:

for y in MyList:

List.append (element to be added)

List.extend ( [elements to be added])

In extend( ) function, multiple elements should be specified within square bracket as arguments of the function.

In the above example, Mylist is created with three elements. Through >>> Mylist.append(90) statement, an additional value 90 is included with the existing list as last element, following print statement shows all the elements within the list MyList.

In the above code, extend( ) function is used to include multiple elements, the print statement shows all the elements of the list after the inclusion of additional elements.

#to delete a particular element

In the above codes, >>> del MySubjects[1:3] deletes the second and third elements from the list. The upper limit of index is specified within square brackets, will be taken as -1 by the python.

NameError: name 'MySubjects' is not defined

The function clear( ) is used to delete all the elements in list, it deletes only the elements and retains the list. Remember that, the del statement deletes entire list.

List.remove(element)       # to delete a particular element

In the above code, clear( ) function removes only the elements and retains the list. When you try to print the list which is already cleared, an empty square bracket is displayed without any elements, which means the list is empty.

step value – It is an optional argument, which is used to generate different interval of values.

In the above code, list( ) function takes the result of range( ) as Even_List elements. Thus, Even_List list has the elements of first five even numbers.

Similarly, we can create any series of values using range( ) function. The following example explains how to create a list with squares of first 10 natural numbers.

In the above program, an empty list is created named “squares”. Then, the for loop generates natural numbers from 1 to 10 using range( ) function. Inside the loop, the current value of x is raised to the power 2 and stored in the variables. Each new value of square is appended to the list “squares”. Finally, the program shows the following values as output.

List comprehension is a simplest way of creating sequence of elements that satisfy a certain condition.

In the above example, x ** 2 in the expression is evaluated each time it is iterated. This is the shortcut method of generating series of values. 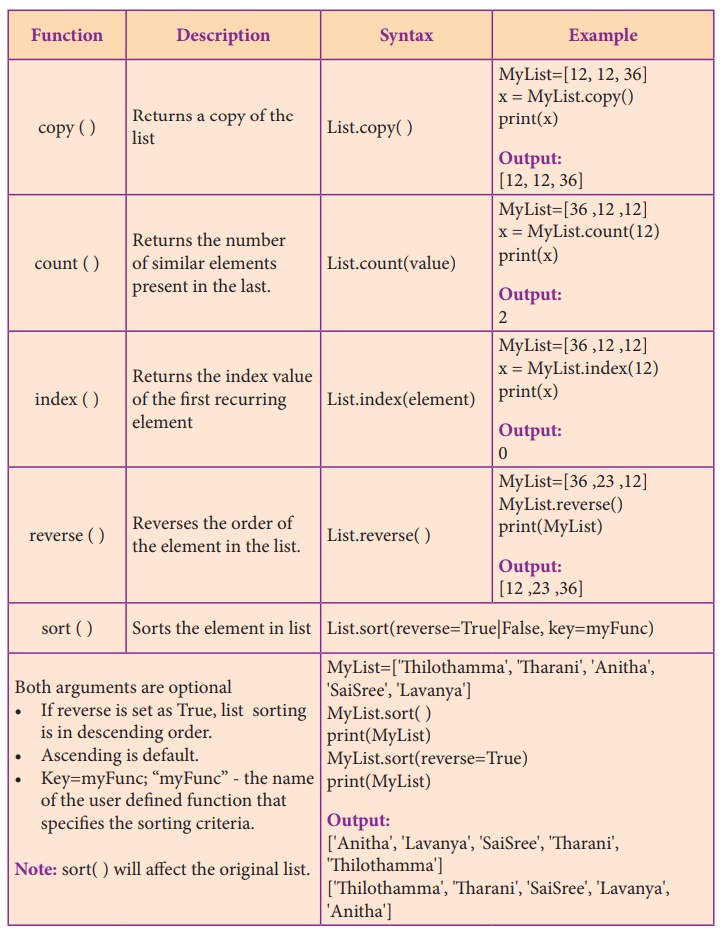 Program 1: write a program that creates a list of numbers from 1 to 20 that are divisible by 4

print(is_member, " is the member of BRICS")

print(is_member, " is not a member of BRICS")

Enter the name of the country: India

India is the member of BRICS

Enter the name of the country: Japan

Japan is not a member of BRICS

Program 3: Python program to read marks of six subjects and to print the marks scored in each subject and show the total marks

Enter no. of employees: 5

2 Employees out of 5 employees are earning more than Rs. 1 Lakh per annum

Program 6: Write a program to create a list of numbers in the range 1 to 10. Then delete all the even numbers from the list and print the final list.

for index, i in enumerate(Num):

Program 7: Write a program to generate in the Fibonacci series and store it in a list. Then find the sum of all values.

The sum of Fibonacci series: 88