The Modern history of India-China relations starts after 1949, with China becoming a Communist country. 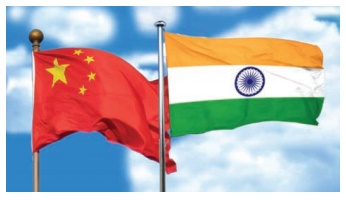 The Modern history of India-China relations starts after 1949, with China becoming a Communist country. India was one of the first country to recognise the People’s Republic of China. However, the initial relationship did not last long as India became suspicious of China’s intention when Tibet was occupied by the Chinese army in 1950. The Hindi – Chini – Bhai Bhai (Indians and Chinese are brothers) enthusiasm in the 1950s did cast off some of India’s fears, but all these developments that happened in due course were lost with the India and China war of 1962. India-China relations can be broadly categorised into three aspects – border issue; economic interests; and cooperation on international issues.

India and China are civilizational powers with long and historical legacies. Buddhism went from India to China along with texts and culture. Fa Hien and Xuan Zhang are some of the travellers who came to ancient India to study. Add to the cultural relations, the ancient Silk Road allowed closer economic relations.

India and China share over 4056 km long border. It is divided into three sections; the border to the east of Bhutan, central border across Utter Pradesh, Punjab and Himachal Pradesh and the border separating Jammu and Kashmir from Chinese territories of Sinkiang and Tibet.

India – China border is known as the McMahon Line, named after Arthur Henry McMahon who was the Secretary of State for India in the British Cabinet. This demarcation was determined in 1914 at the Conference of the representatives of British India, Tibet and China held at Shimla. The boundary line was drawn taking into consideration of the natural boundary as it passes through Tibetan Plateau in the north and Indian hills in the South. This boundary was accepted by all the representatives, although, China at a later date condemned it as an imperialist line. India continues to accept this line as the border with China.

In 1949, at the end of a protracted civil war, a communist regime was establised in China. China had always treated Tibet as its Province and used to collect tributes from her. The Communist regime also treated it as one of her autonomous Provinces. But, a theocratic Tibet could not reconcile with socialist China. The Tibetan issue, particularly granting asylum to Tibetan leader Dalai Lama and his people was a cause of rift between these two countries.

The roots of the India-China border issue can be traced to centuries, its immediate reason relates to China’s occupation of Tibet in 1950. China’s reasons for occupation is based on historical linkage and ideological fervour.

Ever since the occupation of Tibet, China started claiming many of Indian territory as theirs. Despite the talks both the countries had since the 1950s, there was hardly any progress in the clear demarcation of borders. Nonetheless, there was information about frequent cross border infiltrations. By 1961, India decided to firmly fix the borders and launched ‘forward policy’, establishing military posts in the disputed territories. This move by India did not go well with China and it launched a massive attack on Arunachal Pradesh and Ladakh on October 20, 1962. The war lasted only for 31 days, yet it made a long lasting humiliating impact on India.

·           When China announced that it would be occupying Tibet, India sent a letter of protest proposing negotiations on the Tibet issue. China was even more active in deploying troops on the Aksai Chin border.

·           In 1954, China and India concluded the Five Principles of Peaceful Coexistence, under which, India acknowledged Chinese rule in Tibet.

·           In July 1954, Nehru wrote a memo directing a revision in the maps of India to show definite boundaries on all frontiers; however, Chinese maps showed some 120,000 square kilometres of Indian territory as Chinese. On being questioned, Zhou Enlai, the first Premier of People’s Republic of China, responded that there were errors in the maps.

·           The People’s Republic of China’s leader, Mao Zedong felt humiliated by the reception Dalai Lama obtained in India when he fled there in March 1959. Tensions increased between the two nations when Mao stated that the Lhasa rebellion in Tibet was caused by Indians.

·           China’s perception of India as a threat to its rule of Tibet became one of the most prominent reasons for the Sino-Indian War.

·           In October 1959, India realised that it was not ready for war after a clash between the two armies at Kongka Pass, in which nine Indian policemen were killed, the country assumed responsibility for the border and pulled back patrols from disputed areas.

·           On October 20, 1962, China’s People’s Liberation Army invaded India in Ladakh, and crossed the McMahon Line in the then North-East Frontier Agency.

·           Till the start of the war, the Indian side was confident that war would not be started and made little preparations. India had deployed only two divisions of troops in the region of the conflict, while the Chinese troops had three regiments positioned.

·           After hundreds of more deaths and an American threat to intervene on behalf of the Indians, the two sides declared a formal ceasefire on November 19, 1962. The Chinese announced that they would “withdraw from their present positions to the north of the McMahon Line.”

·           Thus, the India-China War of 1962 ended and Colombo Conference was convened by Non-Aligned activist to resolve the dispute amicably. 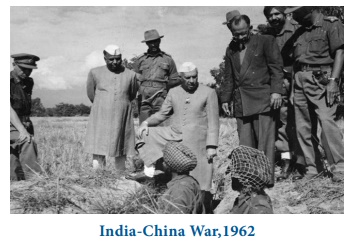 Pursuant to growing tension between India and China and the war, Mrs. Sirimavo Bandaranaike convened what came to be known as the Colombo Conference, bringing together the leaders of Burma, Cambodia, Egypt, Ghana and Indonesia to mediate and reach a possible solution to the conflict between the two Asian giants. India accepted the principles of the Colombo Conference in toto while China accepted them in principle, as the basis to start negotiation.

Even until this day, the 1962 Sino-Indian War is a widely debated topic. The end of the war threw a new boundary line between India and China known as Line of Actual Control (LAC). In 1993, an Agreement on the Maintenance of Peace and Tranquility along the Line of Actual Control (LAC) on the India-China border Areas was signed during Prime Minister Narasimha Rao’s visit to China. The LAC continues to be a matter of irritation between both countries.

Since the mid-1980s, India and China started having a closer bilateral economic relations. The process of dialogue initiated by the governments of the two countries helped in identifying the common trade interests. In 1984, India and China entered into a Trade Agreement, which provided them with the status of Most Favoured Nation (MFN). Since 1992, India and China have been involved in a full-fledged bilateral trade relations. 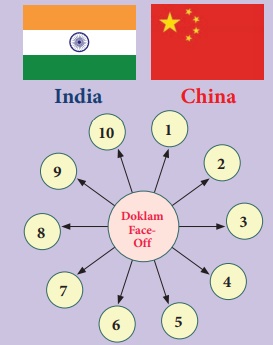 Guided Discussion Teacher divide the class into two groups and ask them to refer e-paper of The Hindu (27.1.2018 – The HINDU Explainer) and Indian Express (28.8.2018 – A Year after Doklam face-off). After reading two Articles by the students teacher can organise the activity in the class.

1. What is the Doklam issue all about?

4. Did Bhutan raise it with China?

5. When and why, did the face-off begin?

6. What were India’s concerns?

7. When did negotiations between India and China to resolve the crisis begins?

8. What arguments did India put forth in these negotiations?

9. What led to a breakthrough?

In the international arena, India and China are competitors for resources. Investments in many of the developing countries by both these emerging Asian giants are all to meet the increasing economic demands of India and China. Despite the widespread competition, India and China have also found some real convergence of interests. Both the countries support for multipolar world order and resist interventionist foreign policy doctrines emanating from the West, particularly the United States. In addition, China and India also share wide-ranging concerns on climate change, trade negotiations, energy security, and global financial crisis. India and China also play a significant role in the WTO and global trade negotiations in the hope for getting better leverage for the developing world over developed states.