Since the Independence of India in 1947 and Sri Lanka in 1948, both India and Sri Lanka enjoyed closer relations with each other. 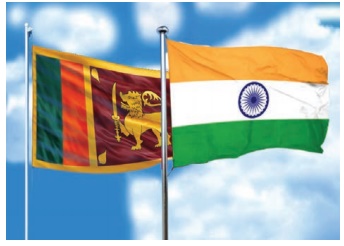 Since the Independence of India in 1947 and Sri Lanka in 1948, both India and Sri Lanka enjoyed closer relations with each other. Despite these closer relations, domestic developments in Sri Lanka has always had a negative impact on each other relations. The main reason for this negative impact is because of the ethnic crises between the Tamils and the Sinhalese and the Indian response towards this issue. Security interests and the shared ethnicity of Tamils living in southern India and in northern and eastern Sri Lanka are the two major factors in Indo – Sri Lankan relations.

According to the 1921 Census, there were nearly 10 principal races, three pairs being subdivisions of larger groups, in Sri Lanka (then known as Ceylon). Of these three were principal races namely, the Low Country and Kandyan Sinhalese, the Ceylon and Indian Tamils, and the Ceylon and Indian Moors. Four other specified races were the Burghers, Eurasians, Malays and Veddas.

The predominant community Sinhalese, which is about three-quarters of the population, are Buddhist and Speak Sinhalese.

The Indian Tamils in Sri Lanka are also largely Hindus. The Muslims mainly of Tamil origin speak both Tamil and Sinhala.

One of the first issues between India and Sri Lankan began with the Ceylon Citizenship Act of 1948, where the Plantation Tamils or Malayaha Tamizhar were deprived of their citizenship.

Ethnic crisis in Sri Lanka has enormous impact on India- Sri Lanka relations due to large Tamil speaking population in southern India as well as the attempts by Sri Lanka to balance India’s influence with the Tamils in Sri Lanka by building geo-strategic pressure by engaging the West or the Chinese selectively. Sri Lanka is critical to India’s coastal security and its interests in the Indian Ocean Region. Any presence of external powers will hence have drastic impact on its defence and security.

Since the end of Eelam War IV, India – Sri Lanka relations have been more constructive. In the recent years the bilateral trade has increased manifold. Nevertheless there are few major concerns both countries need to work out.

Return of Sri Lankan Tamil Refugees continues to be a matter of concern. Unless, there is favorable political situation in Sri Lanka, refugees will not return to their homeland.

The attack on the Indian fishermen continues and has become a regular occurrence. There have been many suggestions to solve this crisis, including deep sea fishing, lease in perpetuity of Katchatheevu, alternate day fishing by Indian and Sri Lankan fishermen, etc., but sadly none of these suggestions have seen the light of the day.

In 1948, immediately after the country’s independence, a controversial law labelled the Ceylon Citizenship Act was passed in the Sri Lankan Parliament which deliberately discriminated against the Tamils of South Indian origin, whose ancestors had settled in the country in the 19th and 20th centuries.

This Act made it virtually impossible for them to obtain citizenship and over 700,000 Tamils (consisting of up to 11% of the country’s total population) were made stateless. In 1964, a pact was signed between Bandaranaike and the then Indian Prime Minister Lal Bahadur Shastri to repatriate much of the population of the stateless Tamils. Over the next 30 years, successive Sri Lankan governments were actively engaged in deporting over 300,000 Tamils back to India. It wasn’t until 2003, after a state-sponsored programme against Tamils and a full-scale civil war, that Indian Tamils were granted citizenship but by this time, their population had dwindled to just 5% of the country’s population. Tamils repatriated to India were assimilated with location population after taking Indian citizenships.

Around 62,000 refugees, living in 107 camps across Tamil Nadu, have been receiving various relief measures of the Central and State governments. In addition, in recent years, the Tamil Nadu government has taken steps for scores of young boys and girls of the refugee community to join professional courses, particularly engineering. This has benefitted eligible candidates among 36,800 non-camp refugees in the State too.

At present, for both India and Sri Lanka, the repatriation of refugees must be a priority. Tamil Nadu hosts the largest number of Sri Lankan Tamil refugees in India. It would be in the interest of both the countries to find the permenant resolution for this problem. While for India a long-standing problem would be resolved, for Sri Lanka it would be a step towards ethnic reconciliation.

The two governments can come out with a comprehensive package on voluntary repatriation, after involving representatives of the refugee community, the Tamil Nadu government and Sri Lanka’s Northern Provincial Council.

For refugees who want to stay back, India can consider providing them citizenship, as it did for refugees from Pakistan and Afghanistan. This can be acheived by filtering out any potential anti-social or anti-state elements, leading to the eventual closing down of refugee camps in Tamil Nadu. Such a process will bring an end to an episode that has lasted longer than the civil war of Sri Lanka.

Kachatheevu originally belonged to kings of Ramanathapuram. NO maps of Sri Lanka showed it as its territory. However, seeing it’s strategic location, Sri Lanka started claiming it. The issue was discussed some times during the meeting between Indian and Sri Lankan leaders. However in 1974 Indira Gandhi signed an agreement whereby Kachatheevu was given to Sri Lanka. Katchatheevu is an uninhabited 285-acre island situated in between India and Sri Lanka in the Gulf of Mannar. It has a Catholic shrine and has been declared as a sacred area by the government of Sri Lanka. The shrine attracts devotees from both the countries. This 1974 agreement had secured the rights of Indian fishermen only to dry their nets and use the Church for religious observance. But then in 1976, delimitation of International Maritime Boundary Line (IMBL) was agreed upon as required by the UNCLOS. With this, Indian fishermen do not have any right to even engage in drying of nets and use of Church because 1976 agreement superseded 1974 agreement. Since then our fishermen are facing innumerable problems. 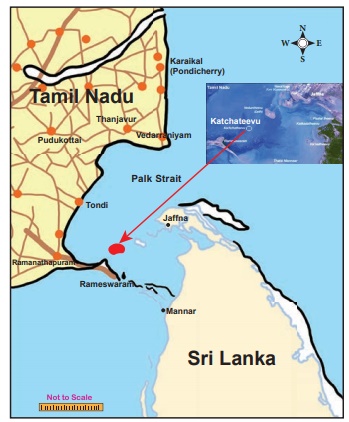 The Nehru-Kotelawala Pact was an agreement that was signed between Jawaharlal Nehru, the Prime Minister of India, and John Kotelawala, the Prime Minister of Sri Lanka, on 18 January 1954. It was an agreement regarding to the status and future of people of Indian origin in Ceylon. They were brought by British from Madras Presidency in British India to work in tea, coffee and coconut plantations of British Ceylon.

·  According to Joint Working Group on Fisheries (JWGF) data, 111 boats of Tamil Nadu fishermen and 51 Indian fishermen were in arrest or detention in Sri Lanka’s Northern Province in 2019.

·  Reasons include on-going disagreement over the territorial rights to the island of Kachchatheevu, and the damaging economic and environmental effects of trawling.

·  Due to the dearth of multi-day fishing capability, Indian fishermen cannot shift their fishing effort from the Palk Bay area to the offshore areas way beyond the continental shelf.

·  Also, due to a gradual drop in fish count in the Indian waters, Indian fishermen are forced to wander into Sri Lankan waters as the catch is insufficient here.

·  In November 2016, an inter-ministerial delegation discussed terms for a joint working group, but the Sri Lankan delegation rejected India’s request for a three year grace period so that the government can assist fishermen to move from bottom trawling fishing method to another sustained and effective method.

Mrs Srimavo Bandaranaike visited India in 1964. After prolonged negotiations, an agreement was signed between Bandaranaike and Shastri.

·  It sought to solve the problem of 9 lakh 75 Thousand stateless persons in Sir Lanka using the following formula:

·  5 lakh 25 thousand will get Indian citizenship. They were to move to India in a period spanning over 15 years.

·  Remaining 1.50 lakh stateless persons fate was to be decided later. 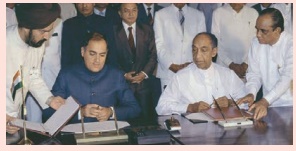 ·  An autonomous unit comprising northern and eastern provinces (where Tamils are concentrated) would be constituted.

·  Elections to provincial councils were to be completed by Dec 31, 1987 in the presence of Indian observers.

·  Emergency was to be lifted from northern and eastern provinces.

·  Tamil, Sinhalese and English would be official languages of Sir Lanka.

·  Deployment of IPKF to guarantee and enforce cessation of hostilities between Lankan army and Tamil militants.

Agreement was vehemently opposed by Sri Lankans and an attack was attempted on Rajiv Gandhi when he was inspecting guard of honour at Colombo airport.

The construction of 43,000 houses for resettlement and rehabilitation of IDPs in Northern and Eastern Provinces is part of the overall commitment to build 50,000 houses announced by Prime Minister Manmohan Singh during the State visit of the President of Sri Lanka Mahinda Rajapaksa to India, in June 2010, 47,000 have been completed until 2018. USD 350 million grant to build the houses was one of the largest grants by India in any country. Indian PM flagged off a train service at the north-western Sri Lankan town of Talaimannar - the closest point to India - restored after decades of civil war, completing the reconstruction of the entire Northern Province Railway Line. Accompanied by Sri Lankan President Maithripala Sirisena, Modi also unveiled a plaque inaugurating Talaimannar 1650 Pier Railway station.

The newly-constructed 63-km railway track is the last segment of the 265-km long, prestigious Northern Railway Line Reconstruction Project which is being executed by IRCON International Ltd., a Government of India owned company.

During the period of Lal Bahadur Sastri’s premiership an agreement was reached between the two nations in resolving the issues of Indian origin Tamils.

India agreed to provide citizenship to two thirds of the people of Indian origin; But the ethnic conflict between native Tamils (Eelam Tamils) and the Singhalese erupted into a protracted civil war, revolting a massive influx of Tamil refugees into India.

·  India can try to get back the island of Kachchatheevu atleast on “lease in perpetuity” or by negotiations.

·  There is a glaring need for institutionalisation of fishing in Indian waters by the Government of India so that alternative means of livelihood are provided.

·  Government will have to mark up a comprehensive plan to reduce the dependence of Indian fishermen on catch from Palk Bay.

If these social issues can be sorted out. India and Sri Lankan can become prime movers in the regional polity.