India and Nepal are geographically close to each other. Nepal’s lowland areas are a part of the Gangetic plain and it occupies the central part of the Himalayan foothills and mountains that extends between China and South Asia. 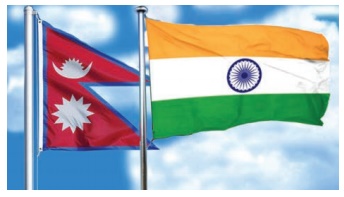 India and Nepal are geographically close to each other. Nepal’s lowland areas are a part of the Gangetic plain and it occupies the central part of the Himalayan foothills and mountains that extends between China and South Asia. Nepal and India share a border of over 1850 kms in the East, South and West with five states, Sikkim, West Bengal, Bihar, Uttar Pradesh and Uttarakhand sharing their borders. Nepal had been earlier the only Hindu Kingdom in the world. However, one –eighth of its population are Buddhists and there is a small population of Muslims and Christians living in the country.

While Nehru always regarded Nepal as a sovereign state, at the same time it was considered as an integral part of India’s security system. Occupation of Tibet by China in 1951 affirmed Nepal’s importance in India’s security umbrella. It was never a “threat from Nepal” but “threat to Nepal”, that India could not afford. An important step towards establishing such an order was the signing of Treaty of Peace and Friendship between India and Nepal on July 31, 1950.

India’s overtures to Nepal went beyond the security interest. On the same day of signing Peace and Friendship Treaty, both the countries also signed Treaty of Trade and Commerce. This agreement became a hallmark of close economic relations between both the countries.

India’s relations with Nepal in the immediate aftermath of independence of both the countries revolved around the political struggle between the King and the Rana’s, (Prime Ministerial clan of Nepal). While negotiating the 1950 Treaty India was also persuading Nepal’s Rana rulers to liberalize their political system to become more democratic and accommodate a section of the population that was fighting to get political rights and freedom. However, India’s advice did not seem to be making much impact on the Ranas, which forced New Delhi to adapt proactive stance and intervene directly in the Nepali situation

India’s approach to Nepal remained consistent ever after the death of Nehru. The subsequent Prime Ministers Lal Bahadur Shastri, Indira Gandhi, Rajiv Gandhi, VP Singh and Chandrashekar followed the same policies for Nepal. There were numerous bilateral visits taken by Prime Ministers of both countries to improve ties. 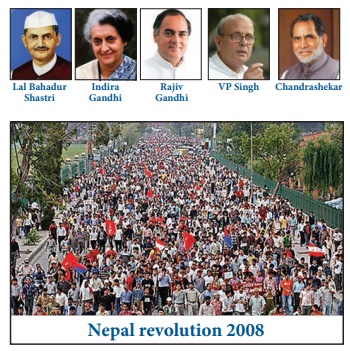 Post 1990’s India has been following a twin pillar policy since restoration of the multi-party system. The pillars include constitutional monarch and multi-party democracy sustaining together. But, this policy started experiencing strains with the beginning of new millennium due to two reasons, namely, the changing character of monarchy and the growing intensity of the Maoist insurgency.

Nepal, the only South Asian country to have never been formally colonized, is situated between India and China, two massive competing economies, each with a unique historical relationship with the Himalayan region.

·           Nepal and China finalized the protocol of their Transit and Transport deal.

·           India and Nepal share a very special relationship with each other. They share a common culture and terrain south of the Himalaya. Bound by languages and religions, marriage and mythology, the links of their civilizational contacts run through both the countries.

·           Republic of India and Nepal began their formal relationship with the 1950 Indo-Nepal Treaty of Peace and Friendship. This treaty is the cornerstone of our current relation with Nepal.

·           Nepal’s geographical location is unique such that it is a natural buffer between India and China.

·           Since Nepal is a landlocked country it greatly depends on India for its interaction with the outside world.

Prime Minister Modi gave a new “5T” (Tradition, Trade, Tourism, Technology and transport) formula for India-Nepal relation during his visit in May, 2018.

·           This treaty is instrumental for a close cooperation between the two countries.

·           India and Nepal share a common culture and have a long history of people to people relationship.

·           Nepali and Indian people visit each other’s country for religious pilgrimage. Pashupati and Janakpur are traditional centres in Nepal whereas Varanasi and the four Dhaams are important pilgrimage destination in India.

·           The Buddhist network is interlinked -- Lumbini is in Nepal, while Kushinagar, Gaya and Sarnath are in India.

India-Nepal Treaty of Peace and Friendship-1950

The 1950 India-Nepal Treaty of Peace and Friendship is a bilateral pact between the Government of Nepal and Government of India aimed at establishing a close strategic relationship between the two South Asian neighbours. The treaty was inked at Kathmandu on July 31, 1950 by then Prime Minister of Nepal Mohan Shamsher Jang Bahadur Rana and the then Indian ambassador to Nepal, Chadreshwar Narayan Singh. The treaty permits free movement of people and goods between the two countries and a close relationship and collaboration on matters of defence and foreign affairs.

·           India is Nepal’s largest trade partner and the largest source of foreign investments, besides providing transit for almost the entire trade which Nepal has with other countries.

·           Indian firms are the leading investors in Nepal, accounting for about 40% of the total approved foreign direct investments.

·           A three–tier mechanism established in 2008, to discuss all bilateral issues relating to cooperation in water resources and hydropower.

·           Nepal has many fast flowing rivers and its terrain makes it ideal for hydroelectric power generation. Nepal’s installed capacity is less than 700 MW while it has a potential to generate over 80,000 MW.

·           An Agreement on “Electric Power Trade, Cross-border Transmission Interconnection and Grid Connectivity” was signed between India and Nepal in 2014.

·           A Joint Technical Team (JTT) has been formed for preparation of long-term integrated transmission plan covering projects up to 2035.

·           The Gorkha Regiments of the Indian Army are raised partly by recruitment from hill districts of Nepal.

·           Bilateral defense cooperation includes assistance to Nepal Army in its modernization through provision of equipment and training.

·           About 250 training slots are provided every year for training of Nepal Army personnel in various Indian Army Training institutions.

·           India and Nepal conducted a joint military exercise, Surya Kiran XIII from May 30 to June 12 in Uttarakhand this year.

·           Recently a MoU was signed on Raxaul-Kathmandu railway line. A postal highway project is also being undertaken.

·           Both the countries are also focused on inland waterways connectivity.

·           The Governments of India and Nepal have signed three sister-city agreements for twinning of Kathmandu-Varanasi, Lumbini-Bodhgaya and Janakpur-Ayodhya.

·           Direct bus service between Janakpur and Ayodhya under Ramayan Circuit under Swadesh Darshan Scheme was launched.

·           Nepal and India share Hindu and Buddhist heritage. Lumbini, the birth place of Lord Buddha is in Nepal while Bodh Gaya where he attained enlightenment is in India. Similarly the hindu pilgrimage places are also spread in both countries. 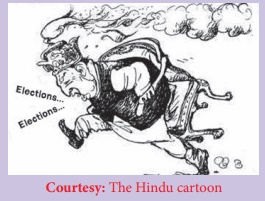 Give two reasons why King Gyanendra refused to accept the transition from a feudal autocracy and monarch to a democratic republic.

·           The two major areas of dispute at Susta and Kalapani (India-China-Nepal tri-junction).

·           Countries agreed to start talks at the foreign secretary-level in order to resolve the problem, however, only a single round of talk has taken place in 2015.

·           There is an open border between India and Nepal which leads to illegal migration and human trafficking.

·           Indo-Nepal border is used as launch pad by maoist, terrorist and drug traffickers.

·           Treaty obliged Nepal to inform India and seek its consent for the purchases of military hardware from third countries. Nepal wants to change this provision.

·           The Nepal-India Eminent Persons’ Group (EPG) is revisiting all bilateral agreements to submit a comprehensive report to both governments on how to reset bilateral relations.

·           Nepal’s attempt to balance the overwhelming presence of India next door by reaching out to China is resented by India as such actions heighten India’s security concerns.

·           Chinese are building a number of highways from the Tibetan side into Nepal, all the way down to East-West highway that traverses Nepal.

·           China plans to extend the Tibet railway to Kathmandu across the border in the next few years.

·           China is trying to contest Indian interests by cultivating local interest groups that could advance China’s interests in Nepal. 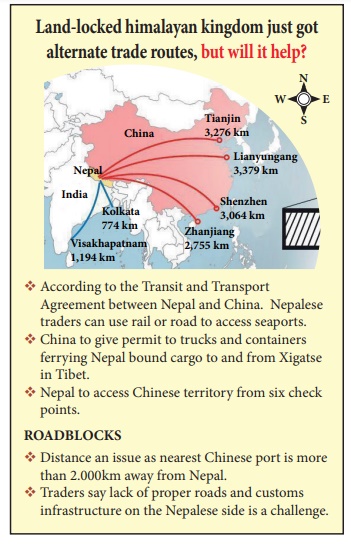 ·           Nepal and China finalized the Protocol of Transit and Transport deal. As per the agreement Nepal can access four ports and three dry ports paving way for the use of Chinese ports for trade. This will reduce Nepal’s dependency on India for its trade.

·           These and other road and railway projects between China and Nepal will allow China to potentially project power against India on a different section of the Sino-Indian boundary.

·           India has an advantage of geography on its side. Chinese rail and port connectivity projects are not very feasible owing to the difficult terrain.

·           The nearest Chinese ports will be close to 3000 km away while Kolkata and Visakhapatnam ports, which Nepal currently uses are much more closer.