India shares a special relation with Bhutan. Being a land locked country, Bhutan is depended on India for most of its products and financial support and India on its part has been providing all possible support. 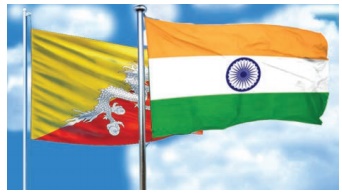 India shares a special relation with Bhutan. Being a land locked country, Bhutan is depended on India for most of its products and financial support and India on its part has been providing all possible support. This makes both the countries ideal example for good neighbourly relations. 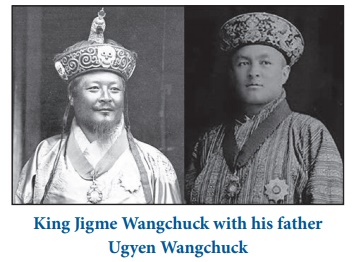 1. Treaty of Punaksha (1910): Bhutan become protectorate state of British India. It means Bhutan to have internal autonomy and not external autonomy

2. Treaty of Friendship and Cooperation(1949) : India and Bhutan signed the Treaty of Peace and Friendship on August 8, 1949, in Darjeeling.

·           The treaty is termed as the continuation of the Anglo-Bhutanese Treaty of 1910. It treats the Himalayas as the sentinel of India’s security

·           The Indo-Bhutan Treaty is dubbed as the corner stone of Bhutan’s foreign policy.

Diplomatic relations between India and Bhutan was established in 1968 with the appointment of a resident representative of India in Thimpu. Before this India’s relations with Bhutan were looked after by the Political Officer in Sikkim.

On India’s initiative, Bhutan has become a member of the Colombo Plan in 1965, joined Universal Postal Service in 1969 and finally India sponsored Bhutan’s membership in 1971. Bhutan’s relations with the NAM (Non- Aligned Movement) countries is yet another initiative of India. 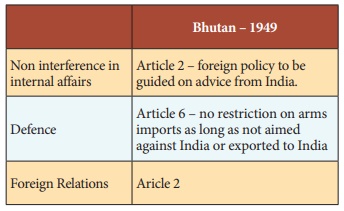 On request of Bhutan, India revised treaty of friendship and cooperation

·           It has been suggested that the revised one modifies India’s role from guiding partner to a close friend and equal partner.

·           Under the revised norms Bhutan no longer require India’s approval over importing arms.

·           There are no limitations for Bhutan with respect to other countries, but it cannot use its territory for activities against India’s security threat.

3. India-Bhutan Trade And Transit Agreement (1972): It provides for duty-free transit of Bhutanese exports to third countries.

Treaty of Cooperation in Hydropower and Protocol (2006): Under this, India has agreed to assist Royal government of Bhutan in developing a minimum of 10,000 MW of hydropower and import the surplus electricity from this to India by the year 2020.

·           Presently, there are three Inter-Government(IG) model is under construction.

Both the countries have conducted joint military operation against insurgents. The most notable was in 2004 when the Royal Bhutanese army conducted operations against ULFA (United Liberation Front of Assam).

Regular visits between highest level Government functionaries of both the countries have become a tradition. For example, in 2014, our Prime Minister chose Bhutan as his first country to visit after getting elected. India sends foreign service officers to Bhutan to maintain good diplomatic relations.

Bhutan is a founding member of the South Asian Association for Regional Cooperation (SAARC). It is also a member of BIMSTEC, World Bank, the IMF, Group of 77 and others.

Bhutanese currency is Ngultrum (Nu.) and is officially pegged to the Indian Rupee (Rs.).

In 2016 a new trade agreement was signed. This agreement aims at cutting down the documentation related to trade and establishing additional trading points in Bhutan.

India-Bhutan foundation was established in 2003 for improving people to people cooperation in the areas of culture, education and environment protection.

The fourth King of Bhutan King Jigme Singye Wangchuck coined the phrase “Gross Nations Happiness” in 1972 and declared that is more important than GDP.

Growing and unsustainable trade imbalance is in favor of India. Bhutan’s trade deficit is set to worsen as India’s Good and Services Tax (GST) makes its exports to Bhutan cheaper and imports from Bhutan more expensive

Bhutan wants to increase its export power tariff to India as it is lesser than the cost of production.

Bhutan has been taken as safe haven by insurgent elements like National Democratic Front for Bodoland (NDFB), United Liberation Front of Assam (ULFA) militants and Kamtapur Liberation Organization (KLO) that often pose threat to internal peace and security in the northeast region of India.

Doklam, or Donglang in China, is an area spread over less than a 100 sq km comprising a plateau and a valley at the trijunction between India, Bhutan and China. It is surrounded by the Chumbi Valley of Tibet, Bhutan’s Ha Valley and Sikkim.

Despite several rounds of engagement between China and Bhutan, the dispute between the two over Doklam has not been resolved. It flared up in 2017 when the Chinese were trying to construct a road in the area, and Indian troops, in aid of their Bhutanese counterparts, objected to it resulting in the stand-off. Doklam is strategically located close to the Siliguri corridor, which connects mainland India with its north-eastern region. The corridor, also called Chicken’s Neck, is a vulnerable point for India. In recent years however, China has been beefing up its military presence in the Chumbi Valley, where the Chinese are at a great disadvantage militarily. Both Indian and Bhutanese troops are on a higher ground around the Valley. 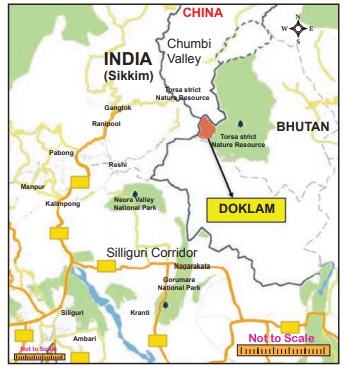 ·           Cross Border Trade of Electricity (CBTE) issued by power ministry will establish the monopoly of India being Bhutan’s sole power market. It restricts the type of hydro power investments that could be made in Bhutan.

·           There is a frequent visit of state heads to boost the bilateral relations.

·           India announced assistance for establishment of an E-Project covering all the 20 districts of Bhutan.

·           The Prime Minister coined the idea of B2B as ‘Bharat to Bhutan’ for building effective and renewed bilateral relationship.

1. India-Bhutan relationship is like ‘milk and water’. They cannot be separated. Therefore India should leave no stone unturned to maintain good relations with Bhutan.

2. India needs to complete some of the hydropower projects that were delayed due to lack of funds.

3. India has a very good relationship with Bhutan whereas China has many border disputes with Bhutan. This relationship and goodwill must be maintained to counter China’s strategic calculations in Bhutan and the region.

4. India needs to augment the connectivity of Bhutan and its North Eastern states for the region’s economic development.

5. India needs to combine the Gross National Happiness of Bhutan with its own economic development to maintain a shared prosperity and relationship between the two countries.