Every Burmese Buddhist wish is to come to India at least once in their lifetime and offer prayers in Bodh Gaya. 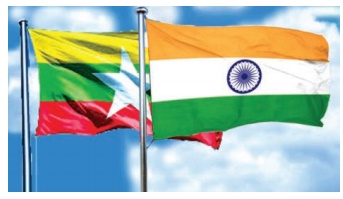 Every Burmese Buddhist wish is to come to India at least once in their lifetime and offer prayers in Bodh Gaya. Long before both nations became independent states, diverse indigenous population living in the border areas, mainly Mizos, Nagas, Kukis, Tangkhul and Paite, enjoyed close familial, linguistic, religious and cultural ties. It’s only after the arrival of British were the borders demarcated and the emergence of two different nations.

India – Myanmar (formerly known as Burma) relations goes back to 2500 years. For the Burmese, Buddhist connections binds both India and Burma together. According to the legend of Shwedagon Pagoda – the heart of the temple is on the buried strands of Lord Buddha’s hair gifted by him to two Burmese merchants. It’s this belief that made King Ashoka to build pagodas in Burma and also for the spread of Buddhism.

The defence of Burma is in fact the defence of India and it is India’s primary concern no less than Burma’s to see that its frontiers remain inviolate. In fact, no responsibility can be considered too heavy for India when it comes to the question of defending Myanmar. – K.M.Panikkar

The Historical close relations between Myanmar and India found it’s low point during the British rule when the Indians had to face resentment amongst the Burmese as the Indian soldiers (under the British Army) fought against the BIA (Burma Independence Army). Burma always perceived that Indian officers and staff functioned as tools of the British colonial regime.

India shares a long land border of over 1600 Km with Myanmar as well as a maritime boundary in the Bay of Bengal. Four north-eastern states viz. Arunachal Pradesh, Nagaland, Manipur and Mizoram share boundary with Myanmar.

These geo-strategic realities encompass our broader interests in the Indian Ocean region. Both countries share a heritage of religious, linguistic and ethnic ties.

Further, Myanmar is the only ASEAN country adjoining India and, therefore, our gateway to South East Asia with which we are seeking greater economic integration through India’s ‘Look East’ and now ‘Act East’ policy. Business opportunities that emerge from a surging economy in Myanmar also provide new vistas for engagement.

India’s Look East policy represents its efforts to cultivate extensive economic and strategic relations with the nations of Southeast Asia in order to bolster its standing as a regional power and a counterweight to the strategic influence of the People’s Republic of China.

India and Myanmar have agreed to a 4-lane, 3200 km triangular highway connecting India, Myanmar and Thailand. The route will run from India’s northeastern states into Myanmar, where over 1,600 km of roads will be built or improved. This is expected to be completed by April 2021. 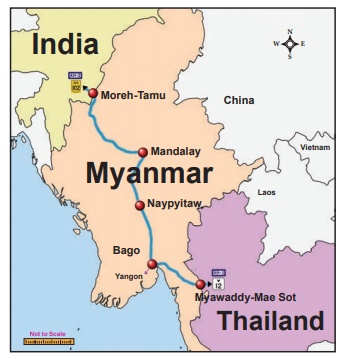 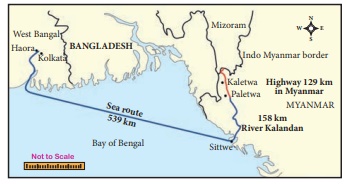 The Kaladan Multi-modal Transit Transport Project will connect the eastern Indian seaport of Kolkata with Sittwe seaport in Myanmar by sea; it will then link Sittwe seaport to Lashio in Myanmar via Kaladan river boat route and then from Lashio on to Mizoram in India by road transport.

1. It has strengthened over the years. Exchange of high-level visits, signing of MoU on border cooperation, training army, air force and naval staff are important indicators in this direction.

2. Myanmar side has provided assurances at the highest levels that it will cooperate with India in taking necessary action in preventing the use of Myanmar territory for anti-India activity.

1. A bilateral Trade Agreement was signed in 1970.

2. India is the fifth largest trading partner of Myanmar but trade remains below potential.

4. India is presently the tenth largest investor with an approved investment of US$ 740.64 million.

6. Besides normal trade, both sides have also taken steps to bolster trade across the land border. Cooperation in the banking sector is crucial for investment and trade. United Bank of India signed banking agreements with banks of Myanmar (MFTB, MICB, MEB, and 9 private banks) to facilitate bilateral trade

7. Myanmar is an important partner in our energy relations with other countries in the region.

1. Restoration of the Ananda Temple in Bagan

2. GOI donation of a 16 foot replica of the Sarnath Buddha Statue which has been installed at the premises of Shwedagon Pagoda in Yangon.

5. India has responded to Myanmar’s interest in restoring and renovating two historic temples in Bodh Gaya built by Myanmar rulers King Mindon and King Baygyidaw. These temples and inscriptions will now be restored with the assistance of the Archaeological Survey of India as a bilateral friendship project.

1. The origin of the Indian community in Myanmar is traced to the mid-19th century with the advent of the British rule in Lower Burma in 1852.

2. The two cities Yangon and Mandalay had a dominating presence of Indians in civil services, education, trade and commerce during the British rule.

ASEAN: As the only ASEAN country which shares a land border with India, Myanmar is a bridge between India and ASEAN.

BIMSTEC: Myanmar is a signatory to the BIMSTEC Free Trade Agreement. Myanmar is the lead country for the energy sector. Myanmar trades mostly with Thailand and India in the BIMSTEC region. Myanmar’s major exports to India are agricultural products like beans, pulses and maize and forest products such as teak and hardwoods. Its imports from India include chemical products, pharmaceuticals, electrical appliances and transport equipment.

Mekong Ganga Cooperation: Myanmar is a member of the Mekong Ganga Cooperation (MGC) since its inception in November 2000. MGC is an initiative by six countries – India and five ASEAN countries namely, Cambodia, Laos, Myanmar, Thailand and Vietnam – for cooperation in the fields of tourism, education, culture, transport and communication. The chairmanship of MGC is assumed by member countries in alphabetical order.

SAARC: Myanmar was given the status of observer in SAARC in August 2008.

1. In India, we often say Myanmar is our “gateway” to the East. Against the rhetoric, the existing connectivity between the two neighbours remains much to be desired. With long land and maritime boundaries, the neighbours are yet to take full advantage of geography.

2. Historically, India has been a major player in Myanmar’s socio-economic landscape till the 1960s. The advent of military dictatorship and its economic policies reduced India’s interactions with Myanmar.

3. As the political transition in Myanmar picks up momentum, it provides an excellent opportunity to explore new avenues of cooperation.