The archipelago of Maldives consists of 1192 islands of which roughly 200 islands are inhabited with an estimated population of 430,000 and 80 islands with tourist resorts. 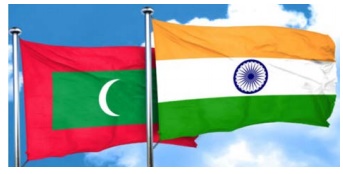 The archipelago of Maldives consists of 1192 islands of which roughly 200 islands are inhabited with an estimated population of 430,000 and 80 islands with tourist resorts. The capital Male is the hot seat of Maldives’ power and is also the most populated Island. Being a completely Sunni Muslim country with a liberal following, Islam is the only state religion and practising of other religions are strictly private affairs within the homes.

The first state level visit was in 1974 when Prime Minister Mr Ahmed Zaki of Maldives made an official visit to India.

India - Maldives formal relations began with the declaration of Maldivian independence in November 1965. India was the first country to recognise Maldives. After which there has been frequent visits by the leaders of both countries. Most of these visits have benefited Maldives economically.

This cordial relationship continued even during President Nasheed tenure. President Nasheed’s maiden international trip after coming to power was to India in 2008. During this visit, India promised a $100 million loan to improve the tourism industry in Maldives. Since then there have been frequent visits by officials and President Nasheed to New Delhi until 2012 when President Nasheed was overthrown in a bloodless coup.

·  Geostrategic Location: Maldives is located just 700 km from the strategic Lakshadweep island chain and 1,200 km from the Indian mainland, and the growing Chinese presence in the archipelago could have serious security implications.

·  Indian Ocean Region hegemony: Chinese heavy presence in Maldives would have given China an opportunity and a base to influence and control the Indian Ocean region. Also, the energy supplies coming from Gulf nations to India pass through this area.

·  Regional imbalance: India enjoys unparalleled access and influence in many of the Indian Ocean island states, including the Maldives, Seychelles, and Mauritius which has been a problem for China. China-Maldives bonhomie can act as a counter to Indian influence in the region. 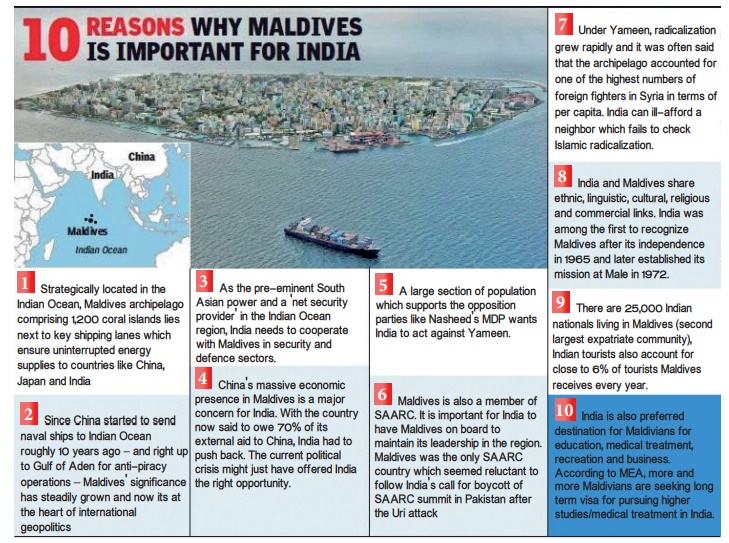 ·  Blue economy:Maldives plays an integral role in realising the potential of Indian Ocean blue economy as a contributor to the security and sustainable development of sea resources.

·  Tourism: India and Maldives see regular tourist visits between the two and Indian tourists also account for close to 6% of tourists Maldives receives each year.

·  Political chaos: Uncertainty in Maldives could prove a fertile breeding ground for extremism and religious fundamentalism, smuggling and drug trafficking.Islamic State (IS) and Lashkar-e-Taiba are also reported to have established bases in Maldives.

·  SAARC has a special importance for India because it includes all of India’s neighbors but China. Of late, China has been creating inroads into SAARC countries which is reducing India’s influence in the bloc, for example Pakistan’s CPEC, China’s Hambantota port etc. and Maldives could be China’s next destination.

Recent development in India-Maldives relations: India and Maldives relations have seen many ups and downs caused by changing political situations in both countries and some external factors. During Maldivian Presidential elections in 2013 Abdulla Yameen defeated Mohamed Nasheed to become the President. During Yameen’s term, Maldives relations with India deteriorated while its closeness with China increased, which is highlighted by:

·  Cancellation of GMR project, 2012: Maldives annulled the $500 million contract with GMR Group to develop a modern International Airport near Male, which was given to a Chinese company.

·  Cancellation of Indian PM’s trip, 2015:Due to turbulent political situation in Maldives, Indian PM cancelled his trip to Maldives.

·  China Maldives FTA, 2017: China and Maldives signed an FTA, which is China’s second FTA with a South Asian country after Pakistan, while there is no FTA between India and Maldives.

During all these negative developments in Maldives, India responded with patience and composure, trying to revive relations diplomatically. However, the election of Solih,in 2018, as the new President of Maldives has caused a thaw in India-Maldives relations which can be gauged by:

·  Despite opposition from Indian Ocean Rim Association, India convinced IORA Committee for Senior Officials in favour of Male, following which Maldives was inducted as the newest member of IORA recently.

·  Maldives has asked India for a Dornier aircraft and the MEA has responded positively to its request.

·  Maldives’ new government has decided to pull out of the free trade agreement (FTA) with China, realizing the one-sided nature of the FTA.

Concerns between India and Maldives

·  China Maldives FTA: An FTA with China would have raised the issue of diverting Chinese products into India through Maldives. Maldivian government has not cleared its stand on future Chinese investments yet and may continue to engage deeply with China.

·  Low bilateral trade: Bilateral trade between both, which stands at US $200 million annually, is quite low.

India’s relations with Maldives began to improve with the Presidential elections in 2018. Ibrahim Solih’s electoral victory has opened a new chapter in the India – Maldives relations. Prime Minister Modi attended the Solih’s swearing-in ceremony and affirmed India’s commitment to peace and friendship with Maldives. The President of the Republic of Maldives, H.E. Mr Ibrahim Mohamed Solih, State Visit to India from 16-18 December 2018, keeping India first policy is yet another opportunity for both counties to come together for a closer relationship. As a step towards furthering closer relations between both countries, India promised $1.4 billion financial assistance package for socio-economic development of the island nation.

Way forward: Recent change in the attitude of Maldivian government is an opportune moment for India to redraw bilateral relations between both by helping Maldives to resuscitate its economy. Some major area of confidence building are

·  Investment cooperation with Maldives should be enhanced by establishing an advisory cell to guide all stake-holders i.e. Indian missions overseas and prospective Indian investors, to delineate touchy areas and risky investments, with full knowledge of the local conditions.

·  ‘Free-Purse’ policy of aid to Maldives is needed if India wants to offset Chinese big-ticket investments in Maldives.

·  India must enhance anti-terrorism cooperation and intensify cooperation in the areas of training and capacity building of the Maldives National Defense Force and the Maldives Police Service.

·  A regular bilateral security dialogue amongst the officials of both sides should be instituted to expand the scope of security cooperation. This should be supplemented by Track-II and Track-1.5 dialogues.

·  While dealing with smaller neighbors like Maldives, India needs to become a lot more magnanimous, staying true to its own “Gujral Doctrine,” thus creating greater confidence

·  The SAARC and IORA can provide a platform to work on lingering concerns. Moreover, India, Maldives and Sri Lanka can explore ways to strengthen trilateral mechanisms to address these issues.