Bangladesh is one of the most important neighbours of India. Bangladesh is also a key partner to India in the South Asian region, and is crucial both for stability in the north-eastern region and as a bridge to South-East Asia. 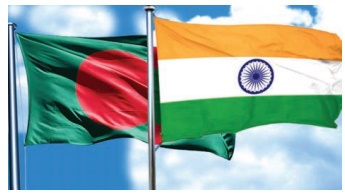 Bangladesh is one of the most important neighbours of India. Bangladesh is also a key partner to India in the South Asian region, and is crucial both for stability in the north-eastern region and as a bridge to South-East Asia. It is an important lynchpin to India’s ‘Look East’ policy.

In 1970, the Bengali Awami League Party won the Pakistani National Elections. But West Pakistan refused to recognize the election results and used brutal force to suppress the agitation by the Awami League Party. This situation led to near war scenario, with armed east Bengalis forming the Mukti Bahini (freedom force). India’s support to the Mukti Bahini by training and the supply of arms, became imminent with millions seeking refuge in India. Pakistan’s pre-emptive strike at India provided the Indian army the much needed excuse to attack East Pakistan. By December 1971, Bangladesh emerged as an independent state.

Establishment of a new state provided a chance for India to have a friendly neighbor. In January 1972, Mujibur Rahman assumed power as the Prime Minister of Bangladesh and his tenure happened to be one of the best times in India – Bangladesh Relations. His tenure also witnessed the signing of Indo-Bangladesh Friendship Treaty. 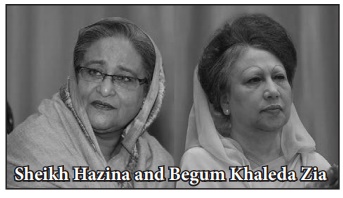 Historical Relations with Bangladesh can be traced to the idea of India and Pakistan pre-dating 1947. The population of both the countries share close and multi faceted socio-cultural,religious and linguistic ties. What is more, both countries have a distinct honor of having their national anthem written by the same poet ‘Rabindranath Tagore.’ The creation of Bangladesh with the support of India, is a significant milestone in the history of South Asia.

1. The Farakka Barrage: Of the various issues responsible for deteriorating Indo-Bangladesh relations, commissioning Farakka dam in West Bengal, about 11 miles from Bangladesh’s border, has perhaps attracted the most International attention. India maintains that it needs the barrage for the purpose of flushing the Hooghly River to make it free from silt and therefore keep the port of Calcutta operational and also to meet the demand from Kolkata for industrial and domestic use, and for irrigation purposes in other parts of West Bengal. Despite the negotiations since 1970’s at both regional and international levels, both the nations have still not been able to reconcile with a proper solution.

2. Sharing of Teesta Water: The Teesta River originates from Teesta Kangse glacier about 7,068 metres (23,189 ft.) height and flows southward to Sikkim, West Bengal and Bangladesh. This river merges with the Brahmaputra river when it enters Bangladesh and ends in the Bay of Bengal. The dispute was started when West Bengal government began constructing barrages on the river in 1979 mainly for irrigation purposes. The Bangladesh Government opposed it and argued that the major rice producing areas of Bangladesh, especially the ‘rice bowl’ Rangpur region lie in the Teesta and Brahmaputra river basin. In 1983, an adhoc agreement on water sharing was signed between both counties. Yet, being an upper riparian state, India has not been able to supply the promised amount of water. Politically river water sharing continues to haunt both the countries.

3. New Moore Island or South Talpatti (Known in Bangladesh): New Moore Island is a small uninhabited offshore sandbar landform in the Bay of Bengal, off the coast of the Ganges-Brahmaputra Delta region. It emerged in the Bay of Bengal in the aftermath of the Bhola cyclone in 1970, and disappeared at some later point. For nearly 30 years, India and Bangladesh have argued over control of a tiny rock island in the Bay of Bengal but later in 2010 the rising sea levels have resolved the dispute for them as the island was submerged. New Moore Island, in the Sunderbans, has been completely submerged, Its disappearance has been confirmed by satellite imagery and sea patrols. Scientists at the School of Oceanographic Studies have noted an alarming increase in the rate at which sea levels have risen over the past decade in the Bay of Bengal. Although the island was uninhabited and there were no permanent settlements or stations located on it, both India and Bangladesh claimed sovereignty over it because of speculation over the existence of oil and natural gas in the region.

The Resolution: In Permanent Court ofArbitration(PAC)thedisputewassettled in July 2014 by a final verdict not open to appeal and in favour of Bangladesh. The Permanent Court of Arbitration (PCA) verdict awarded Bangladesh with 19,467 km2 out of 25,000 km2 disputed area with India in the Bay of Bengal. However New Moore Island has fallen in India’s part of the Bay of Bengal. 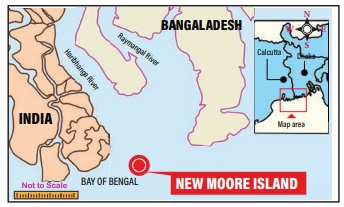 Tripura and other northeastern states are surrounded by Bangladesh, Myanmar,Bhutan and China on three sides and the only land route access to these states from within India is through Assam and West Bengal by Siliguri or the Chicken’s Neck Corridor.

4. Chakmas Refugees Issue: The Chakmas and Hajongs living in the Chittagong Hill Tracts fled erstwhile East Pakistan in 1964-65, since they lost their land to the development of the Kaptai Dam on the Karnaphuli River. In addition, they also faced religious persecution as they were non-Muslims and did not speak Bengali. They eventually sought asylum in India. The Indian government set up relief camps in Arunachal Pradesh and a majority of them continue to live there even after five decades. According to the 2011 census, 47,471 Chakmas live in Arunachal Pradesh alone.

5. Border Issue: Bangladesh and India share a common border of 4096 km running through five states, namely, West Bengal, Assam, Meghalaya, Tripura and Mizoram. There are 162 enclaves between Bangladesh and India. The border regions have emerged as a major transit point for smugglers of contraband goods, human traffickers and terrorist and insurgent groups living near the border. Hence, border management has become a major challenge for both countries.

·           A bus service and a train service between Kolkata and Dhaka was also launched.

·           Memorandam of Understanding (MoU) has been signed on the development of Ashuganj-Zakiganj stretch of Kushiyara river and Sirajganj-Daikhawa stretch of the Jamuna river to improve connectivity between the two countries and this will help reduce cost of cargo movement to northeast India and also reduce congestion through the Siliguri’s ‘Chicken’s Neck’ corridor.

·           Connectivity is an issue of mutual interest as these initiatives on passenger and goods trains will be of benefit to both Bangladesh and northeast India.

·           Dhaka also has the central role in shaping the future of sub-regional cooperation with Bhutan, Burma, India and Nepal. It is also a land bridge to East Asia and the fulcrum of a future Bay of Bengal community.

·           However, the most important issue in contemporary Asian geopolitics is transit and connectivity. In 2016 when Chinese President Xi Jinping visited Bangladesh, it agreed to join the Belt and Road Initiative (BRI).

·           China is already investing in a number of infrastructure projects in the country including the deep sea port at Chittagong. It is likely that these projects will now be subsumed under the BRI project which is the matter of concern for India.

·           Energy cooperation between the two sides has also shown a lot of positivity with Indian state Tripura supplying a total of 160 MW of power to Bangladesh in addition to the 500 MW the country is receiving from West Bengal since 2013.

·           Bangladesh has sought extra 100 MW electricity from India to solve its power crisis, and will be likely on the negotiating table.

·           There are talks that a defence treaty is to be signed between India and Bangladesh, it will be a long-term defence deal that will allow for increased defence cooperation, information sharing, joint exercises, training and so on. However, India needs to figure out where it can meet Bangladesh’s security concerns, considering Bangladesh’s largest defence partner is China.

·           Expanding security cooperation with India could only enhance Dhaka’s global leverage. For India, a strong partnership with Bangladesh will help boost the prospects of peace and prosperity in the eastern subcontinent.

·           Defence deal between the two nations on the basis of sovereign equality and geopolitical realities will take us a long way ahead.

The India-Bangladesh relations can be summarised as hanging on three ‘T’s – 1. Tackling Terrorism, 2. Trade + Transit and 3. Teesta Treaty. we should hope to resolve the issues and take the relationship forward so that the growing mutual trust and political comfort between Delhi and Dhaka will have a long-term consequence. It is important for India’s North-East as well.