History has been uncharitable to India and Pakistan, two close neighbours who, just a little over seven decades, shared geography, culture, religion, language, and the very ethos and philosophy of life that sustained an ancient civilization. 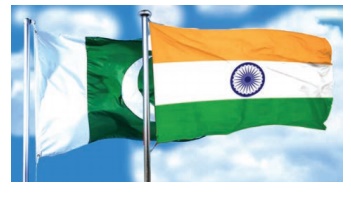 History has been uncharitable to India and Pakistan, two close neighbours who, just a little over seven decades, shared geography, culture, religion, language, and the very ethos and philosophy of life that sustained an ancient civilization. The bitter partition of India and Pakistan, led mass migration amidst horrendous violence as Muslims fled to Pakistan and Hindus and Sikhs to India in millions. The tragedy that began at the time of partition continues to have effect until this day in forms of wars that both countries fought and the menace of terrorism for which both countries are victims.

The region of Kashmir is at the heart of hostility between the neighbours and was the cause of two of their three wars since independence from Britain in 1947. Under the partition plan provided by the Indian Independence Act, Kashmir was free to accede to either India or Pakistan. The Maharaja of Kashmir, Hari Singh, initially wanted Kashmir to become an independent nation - but in October 1947 chose to join India, in return for its help against an invasion of tribesmen from Pakistan. A war erupted and India approached the United Nations asking it to intervene.

The war came to an end on January 1, 1949, by a UN-mandated ceasefire line, along with the deployment of a UN peace-keeping group at the ceasefire line. This was the first Indo-Pakistani war. This proved to be the longest-running war over Kashmir, but was also the least costly as a result of the limited nature of the firepower employed by both sides. As a fallout of end of war in Kashmir a result of the ceasefire agreement, a Line Of Control (LOC) was established between the opposing armies, which left Pakistan occupying about a third of the State.

The United Nations recommended holding a plebiscite to settle the question of whether the state would join India or Pakistan. However the two countries could not agree to a deal to demilitarise the region before the referendum could be held. In July 1949, India and Pakistan signed an agreement to establish a ceasefire line as recommended by the UN and the region became divided. A second war followed in 1965. The only declared war between Pakistan and India was in 1971, rest of the wars were more related to the border skirmish and not a declared battle. What is more, since the time both nations got their freedom, they have always been assuring each other that both stood for peace and not for war. 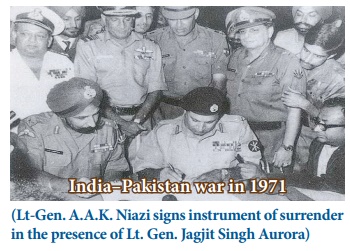 Then in 1999, India fought a brief but bitter conflict with Pakistani-backed forces known as the Kargil War. By that time, India and Pakistan had both declared themselves to be nuclear powers. Separatists began an insurgency against Indian rule in 1989 backed by Pakistan and since then tens of thousands of people have been killed there due to terrorism. 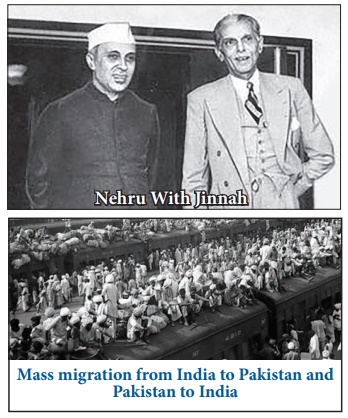 The Simla Agreement was signed between India and Pakistan on 2 July 1972 in Shimla, the capital city of the Indian state Himachal Pradesh. It followed the Bangladesh Liberation war in 1971 that led to the independence of Bangladesh, which was earlier known as East Pakistan and was part of the territory of Pakistan. India entered the war as an ally of Bangladesh which transformed the war into an Indo-Pakistan War of 1971. The agreement was ratified by the Parliaments of both the nations in same year. The treaty was signed in Simla by Zulfiqar Ali Bhutto, the President of Pakistan, and Indira Gandhi, the Prime Minister of India. The agreement also paved the way for diplomatic recognition of Bangladesh by Pakistan. 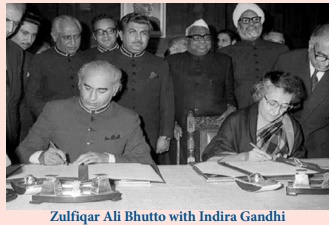 Today the question of India – Pakistan relations revolves around three major issues; Kashmir, Terrorism and Economic relations. While, each of these aspects are interlinked, it is important to understand by itself these issues are a major concern for the peace of South Asia. Having not been able to take over Kashmir, and also having lost East Pakistan (now called Bangladesh) due to India’s intervention in 1971, Pakistan is keen in destabilising India by supporting terrorism 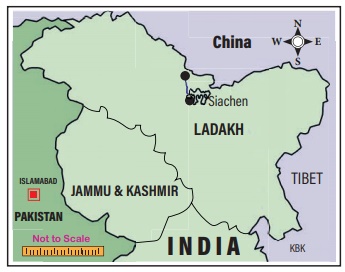 Indian and Pakistani forces have faced off against each other in mountains above the Siachen glacier in the Karakoram range, the world’s highest battlefield, since 1984.The two sides have been trying to find a solution that would allow them to withdraw troops, but no solution has been arrived at so far. 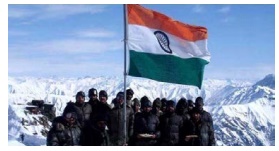 It was launched as a response to Pakistan’s frequent provocations along the border and Line of Control.

What is a surgical strike?

·           They aim at having a minimum damage to the surrounding structures including civilian buildings.

The two countries disagree over use of the water flowing down rivers that rise in Kashmir and run into the Indus river basin which goes to Pakistan.The use of the water is governed by the 1960 Indus Water Treaty under which India was granted the use of water from three eastern rivers, and Pakistan the use of three western rivers.Pakistan says India is unfairly diverting water with the upstream construction of barrages and dams. India denies the charge. 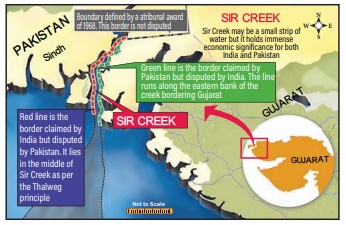 Kashmir and Siachen aren’t the only issues the two nuclear powers of South Asia lock horns. Sir Creek is another major issue that’s been waiting for a resolution for over 70 years. Sir Creek is a 96-km strip of water disputed between India and Pakistan in the Rann of Kutch marshlands. Originally named Ban Ganga, Sir Creek is named after a British representative. The Creek opens up in the Arabian Sea and roughly divides the Kutch region of Gujarat from the Sindh Province of Pakistan. The dispute lies in the interpretation of the maritime boundary line between Kutch and Sindh. Before India’s independence, the provincial region was a part of the Bombay Presidency of British India. But after India’s independence in 1947, Sindh became a part of Pakistan while Kutch remained a part of India. Apart from its strategic location, Sir Creek’s core importance is fishing resources. Sir Creek is considered to be among the locking horns over the presence of great oil and gas concentration under the sea, which are currently unexploited. 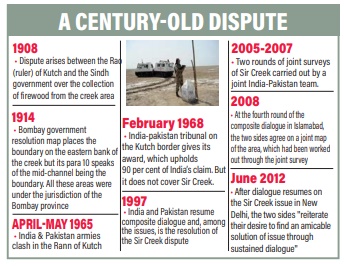 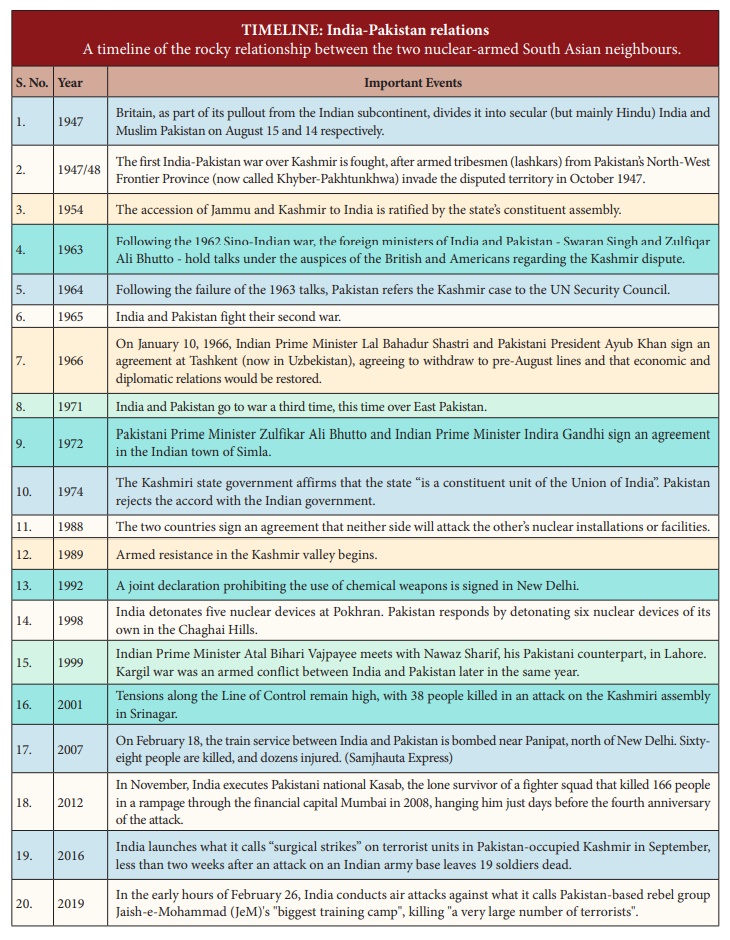 · Assassination of Abdul Ghani Lone: Abdul Ghani Lone, a prominent All Party Hurriyat Conference leader, was assassinated by an unidentified gunmen during a memorial rally in Srinagar. The assassination resulted in wide-scale demonstrations against the Indian forces for failing to provide enough security cover for Mr.Lone.

· The 2008 Mumbai attacks (Also referred to as 26/11) were a series of terrorist attacks that took place in November 2008: 10 members of Lashkar-e-Taiba, an Islamic terrorist organisation based in Pakistan, carried out 12 coordinated shooting and bombing attacks lasting four days across Mumbai. The attacks, which drew widespread global condemnation, began on Wednesday 26 November and lasted until Saturday 29 November 2008. At least 174 people died, including 9 attackers, and more than 300 were wounded.

· 2016 Uri attack: A terrorist attack by four heavily armed terrorists on 18 September 2016 near the town of Uri in the Indian state of Jammu and Kashmir killed 18 and left more than 20 people injured. It was reported as “the deadliest attack on security forces in Kashmir in two decades”.

· 2019 Pulwama attack: On 14 February 2019, a convoy of vehicles carrying security personnel on the Jammu Srinagar national highway was attacked by a vehicle-bound suicide bomber in Lethpora near Awantipora, Pulwama district, Jammu and Kashmir. The attack resulted in the death of 38 Central Reserve Police Force (CRPF) personnel. The responsibility of the attack was claimed by the Pakistan-based Islamist militant group Jaish-e-Mohammed.

If China can be India’s largest trading partner why can’t India be Pakistan’s, burying the issue of Kashmir through free movement of capital and people? Discuss.