India has sought to establish its presence in Afghanistan from the early days of its independence in 1947.In 1950, Afghanistan and India signed a “Friendship Treaty.”

India has sought to establish its presence in Afghanistan from the early days of its independence in 1947.In 1950, Afghanistan and India signed a “Friendship Treaty.” 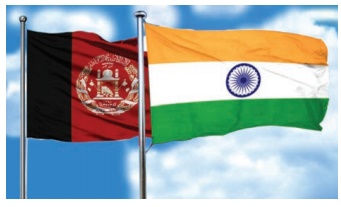 India had robust ties with Afghanistan during King Zahir Shah’s regime. Prior to the Soviet invasion in 1979, India had formalized agreements and protocols withvarious Pro-Soviet regimes in Kabul. While India’s role in Afghanistan King Zahir Shah was constrained during the Anti-Soviet jihad, between 1979 and 1989, India expanded its development activities in Afghanistan, focusing upon industrial, irrigation, and hydroelectric projects.

After the Taliban consolidated their hold on Afghanistan in the mid-1990s, India struggled to maintain its presence and to support anti-Taliban forces. However, Indian objectives in Afghanistan remained modest given the constrained environment. India aimed to undermine the ability of the Taliban to consolidate its power in Afghanistan, principally by supporting the Northern Alliance in tandem with other regional actors. Working with Iran, Russia, and Tajikistan, India provided important resources to the Northern Alliance, the only meaningful challenge to the Taliban in Afghanistan. Since 2001, India has relied upon development projects and other forms of humanitarian assistance. Expanding India’s presence in Afghanistan through increased Indian training of Afghan civilian and military personnel, development projects, and expanded economic ties. India and Pakistan competition in Afghanistan is seen as a new “Great Game”.

Afghan is India’s natural ally. India is interested in retaining Afghanistan as a friendly state from which it has the capacity to monitor Pakistan and cultivate assets to influence activities in Pakistan. While India is keenly interested in cultivating a significant partnership with Afghanistan, Pakistan is trying to deny India such opportunities.

India’s interest in Afghan is more than just Pakistan-centric and reflects its aspiration to be seen as a regional power. Islamic fundamentalism in Pakistan and Afghanistan has dangerous effects in the domestic social fabric of India. 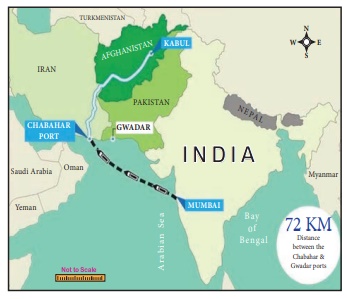 The operation of the Chabahar port in Iran could substantially increase Afghanistan’s exports by providing a new transit route for Afghan to trade with India and the rest of the world. Recently the Indian government has approved USD 85 Million for upgrading the capacity of Chabahar Port in Iran for an alternate trade transit route for Afghanistan.

India faced many security challenges from the Taliban in Afghan during the 1990s.Pakistan has raised and supported several militant groups such as Lashkar-e-Taiba, Harkat-ul-Mujahideen/Harkat-ul-Ansar, and Harkat-ul-Jihad-al-Islami among others, which operate in India. All of these groups have trained in Afghanistan, with varying proximity to the Taliban and by extension Al-Qaeda. Thus India is absolutely clear that Afghanistan should not again become a terrorist safe haven. Radical ideologies and terrorism spreading in this region are a security threat for India.

With Pakistan increasing its strategic depth in Afghanistan, it can reverse the gain of India. Pakistan can incubate and move around various anti-India groups in Afghan especially in Loya Paktia. The golden crescent comprising of Iran, Afghan, and Pakistan is a worry for India, especially with respect to the issue of drug abuse in Punjab. Islamic State is using Afghan as an outpost in Asia as it has come under stress in Iraq and Syria.

India also realises that stability can result in Afghanistan only if all the major actors and countries have a stake in its stability, growth and prosperity. India has been championing efforts to attract regional and trans-regional investment into Afghanistan that provides a viable alternative to the dominant narrative of extremism and offers job opportunities to its population by pioneering events like the Delhi Investment Summit on Afghanistan in June 2012. Recognising that the region holds the key to peace in Afghanistan, India is spearheading commercial confidence building measures in the region within the purview of the Heart of Asia Process. Multilaterally, it helped initiate a dialogue on Afghanistan through various platforms like the Afghanistan-India-US trilateral and the Afghanistan-India-Iran trilateral that seek to bring together international partners with disparate worldviews in pursuit of the common goal of securing peace and prosperity in Afghanistan. India also expressed its support to international cooperation on Afghanistan at the UN and at various international conferences focused on the future of Afghanistan, including the seminal Tokyo Developmental Conference in July 2012 and London Conference in December 2014.

In 1999, Pakistan terrorists hijacked Indian Airlines flight IC:814 and landed it in Kandahar,Afghanistan during Taliban rule.

In 2015, in a first major offensive military platform to Kabul, India gifted three Mi 25 attack helicopters. The delivery marks the first time India has gifted offensive combat capability to Afghanistan, a sensitive topic in the past due to strong objections by Pakistan. Under the agreement, India will also train Afghan defence personnel in operations.

India’s developmental approach has earned it immense goodwill among the Afghan people. However, the “soft power” strategy has limitations. Thus, India is in the dilemma between continued soft-power or to aggressively push its hard power.

While India’s principled position that it will not directly or publicly talk to the Taliban until it engages the Afghan government, it is necessary that India stays abreast of all negotiations and isn’t cut out of the resolution process. It is hoped that a robust channel is open between Indian intelligence agencies and all important groups in Afghanistan, including the Taliban, in order to ensure that Indian interests, development projects, and citizens are kept secure.

India should leverage the goodwill it enjoys among the Afghan people. India must intensify its dialogue with regional and global stakeholders, and impress upon them that any dialogue with the Taliban must not come at the cost of the hard-fought victories of the Afghan people in the past two decades; on establishing constitutional democracy and the rule of law, and securing the rights of women and minorities. It is time for India to engage the Taliban to secure its interests. India also needs to reassess its policy choices in close coordination with Russia and Iran, constantly reminding them that complete surrender to the Taliban’s demands will be detrimental to their own security.

·           Rebuilding of the Habibia High School, also in the capital, and providing it with grants-in-aid.

·           Financing the establishment of the Afghan National Agriculture Sciences and Technology University (ANASTU) in Kandahar and assisting it in various ways.

·           Building the cricket stadium in Kandahar; Lets Afghanistan’s national cricket team use an Indian stadium as its home ground.

·           Upgrading telephone exchanges in some provinces.