Income tax is a direct tax under which tax is calculated on the income, gains or profits earned by a person such as individuals and other artificial entities (a partnership firm, company, etc.)

Income tax is a direct tax under which tax is calculated on the income, gains or profits earned by a person such as individuals and other artificial entities (a partnership firm, company, etc.)

Features of Income Tax in India

i. Levied as Per the Constitution

Income tax is  levied  in  India  by  virtue of entry No. 82 of list I (Union List) of Seventh Schedule to the Article 246 of the Constitution of India.

Income tax is direct tax. It is because the liability to deposit and  ultimate  burden  are on same person. The person earning income is liable to pay income tax out of his own pocket and cannot pass on the burden of tax to another person.

Income tax is an annual tax because it is the income of a particular year which is chargeable to tax.

It is a tax on income earned by a person. The term ‘person’ has been defined under the Income tax Act. It includes individual, Hindu Undivided Family, Firm, Company, local authority, Association of person or body of Individual or any other artificial juridical persons. The persons who are covered under Income tax Act are called ‘assessees’.

It is a tax on income. The Income tax Act has defined the term income and it includes salary income, house property income, business/profession income, capital gains and other sources income. However, there are certain incomes which are specifically exempt from income tax.

vii. Income of ‘Previous Year’ is Assessable in ‘Assessment Year’

ix. Administered by the Central Government

Income Tax is applicable throughout India including the State of Jammu and Kashmir.

Assessee means a person by whom any tax or any other sum of money is payable under this Act. It includes every person in respect of whom any proceeding has been taken for the assessment of his income or assessment of fringe benefits.

The term ‘person’ includes the following

·           an Association Of Persons or a Body Of Individual, whether incorporated or not,

The term has been defined under section 2(9). The year in which tax is paid is called the assessment year. It normally consisting of a period of 12 months commencing on 1st April every year and ending on 31st March of the following year.

The year in which income is earned is called previous year. It is also normally consisting of a period of 12 months commencing on 1st April every year and ending on 31st March of the following year. It is also called as financial year immediately following the assessment year.

·           Value of perquisite or  profit  in  lieu of salary taxable u/s 17 and social allowance or benefit specifically granted either to meet personal expenses or for performance of duties of an office or an employment of profit.

·           Interest, salary, bonus, commission or remuneration earned by a partner of a firm from such firm.

·           Profits and gains from the business of banking carried on by a co- operative society with its members.

·           Winning from lotteries, crossword puzzles, races including horse races, card games and other games of any sort or from gambling or betting of any form or nature whatsoever.

·           Sums received by an assessee  from his employees towards welfare fund contribution such as provident fund, superannuation fund, etc.

·           Benefit or  perquisite  received  from  a company, by a director or a person holding substantial interest or a relative of the director or such person.

Any rent or revenue derived from land which is situated in India and is used for agriculture purposes. Agricultural income is fully exempted from tax u/s 10(1) and as such does not form part of total income.

Section 14 of Income Tax Act 1961 provides for the computation of total income of an assessee which is divided under five heads of income. Each head of income has its own method of computation.

These five heads are;

Income from all the above five heads of income shall be computed separately according to the provisions given in the Act. Income computed under these heads shall be aggregated after adjusting past and present losses and the total so arrived at is known as ‘Gross Total Income’.

Out of Gross Total Income, Income  tax  Act 1961 allows certain deductions under section 80. After allowing these deductions the figure which we arrive at is called ‘Total Income’ and on this figure tax liability is computed at the prescribed rates. 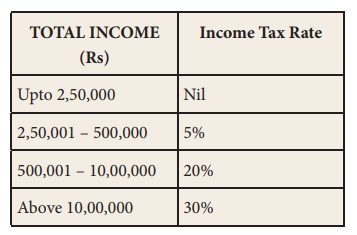