Incident of the French Camp

The poem describes an act of chivalry, gallantry, patriotism and sacrifice on the part of a young French soldier.

Incident of the French Camp

Before you begin to listen to the poem, let’s know about the interesting background of the incident of the French camp.

Napoleon Bonaparte (1769–1821) was originally an officer in the French army became the army chief and a legendary warrior, who later known for his military skill and genius.

The poem ‘Incident of the French Camp’ narrates an actual incident in the war in 1809 between France and Austria, led by Napoleon.

Napoleon was standing on a little mound, eagerly looking towards Ratisbon. His mind was oppressed with anxious thoughts and he said to himself that all his ambitious plans would come to nothing if Lannes failed to storm Ratisbon.

The poem describes an act of chivalry, gallantry, patriotism and sacrifice on the part of a young French soldier.

You know, we French stormed Ratisbon:

A mile or so away,

On a little mound, Napoleon

With neck out-thrust, you fancy how,

As if to balance the prone brow

Just as perhaps he mused, ‘My plans

That soar, to earth may fall,

Let once my army-leader Lannes

Out ’twixt the battery-smokes there flew

A rider, bound on bound

Then off there flung in smiling joy,

And held himself erect

By just his horse’s mane, a boy:

You hardly could suspect –

(So tight he kept his lips compressed,

Scarce any blood came through)

You looked twice ere you saw his breast

The Marshal’s in the market-place

And you’ll be there anon,

To see your flag-bird flap his vans

Where I, to heart’s desire,

Perched him!’ The Chief ’s eye flashed; his plans

Softened itself, as sheathes

When her bruised eaglet breathes:

Touched to the quick, he said:

‘I’m killed, Sire!’And, his Chief beside,

Robert Browning (7 May 1812–12 December 1889) was an English poet and playwright whose mastery of the dramatic monologue made him one of the foremost, Victorian poets. He was born in Camberwell, a suburb of London on 7 May 1812. He was educated mainly at home, but he attended a short course in Greek at London University. His poems are known for their irony, characterisation, dark humour, social commentary, historical settings and challenging vocabulary and syntax. He developed a unique form of conversational, unrhythmic verse. The collection ‘Dramatis Personae’ and the book- length epic poem “The Ring and the Book” made him a leading British poet. By 1881 in recognition of his outstanding contribution to literature, a literary society called Browning Society was established. 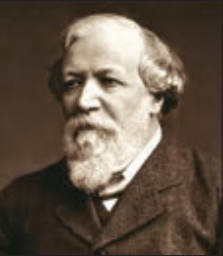