Certain statistical data of Indian Railways regarding passenger and freight traffic, operating efficiency, railway employees and their training, and social costs of Indian Railways as well as engineering data are given in the following sections.

Certain statistical data of Indian Railways regarding passenger and freight traffic, operating efficiency, railway employees and their training, and social costs of Indian Railways as well as engineering data are given in the following sections.

Indian Railways carried 5112 million originating passengers in 2003-04. Some of the salient features of passenger traffic are given in Table 1.10.

The analysis of passenger figures for the last 50 years leads to the following conclusions.

1.  Over the years, there has been a steady increase in passenger traffic output in terms of passenger kilometres.

3.  Suburban as well as mail/express traffic has shown a higher rate of growth since 1950-51 than the overall average growth rate.

With the pace of economic growth picking up, Indian Railways is being called upon to provide greater and stronger infrastructure support to the economy. Some important statistics on revenue-earning freight traffic for the year 1950-51 as well as those for 2003-04 are given in Table 1.11.

The Railways as a means of transport are more suitable (for carrying) bulk traffic in train loads, which is mainly offered by the core sector. However, there has been a decline in the Railways, share of transport, particularly in the case of cement, petroleum, and iron and steel, largely on account of competition from other modes of transport, namely, highways, pipelines, coastal shipping, etc.

The Railways, besides rationalization of the freight structure and effecting no across-the-board increase in freight rates during the last two years, has taken several initiatives to retain and attract traffic.

The operating efficiency indices of Indian Railways compare favourably with some advanced railway systems of the world as shown in Table 1.13.

Indian Railways has developed its own facilities for conducting extensive training programs for its officers and staff to enable them to improve upon their skill/abilities and equip them with the latest technological developments. Training for officers is organized in six centralized training institutions (CTIs):

The training needs of non-gazetted staff are being taken care of by over 200 training centres located in different parts of the country. Training has been made mandatory at different stages to make it more effective for staff belonging to some of the safety categories.

Indian Railways is a public utility undertaking of the Government of India. They do not have the freedom to adjust their freight and fare rates corresponding to the increase in the prices of the various inputs used by them. They also carry certain essential commodities, as also passenger traffic, at rates which do not even cover their cost of movement. In addition, traffic bound for flood-affected and drought-hit areas is carried at concessional rates. Certain non-remunerative branch lines are also being operated purely in public interest. Such social obligations, which Indian Railways has carried out all along, are not usually borne by purely commercial undertakings. Losses incurred on this account are termed Social Service Obligation.

The main items involved in this Social Service Obligation are the following.

(b) Subsidized suburban and some other passenger services (Rs 8070 million for suburban traffic only). 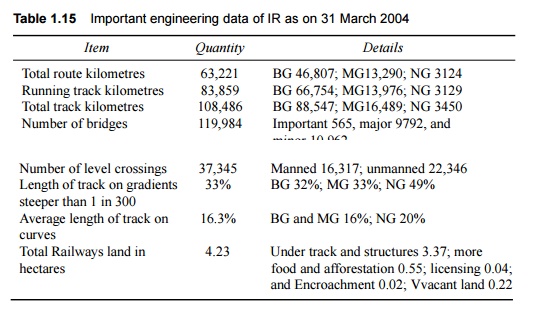