Indian Railway is the second largest state-owned railway system in the world (after Russian Railways) under unitary management. The important features of Indian Railways are described here.

Indian Railway is the second largest state-owned railway system in the world (after Russian Railways) under unitary management. The important features of Indian Railways are described here.

Track or permanent way is the single costliest asset of Indian Railways. It consists of rails, sleepers, fittings and fastenings, ballast, and formation. Complete details of the track are given in Chapter 5.

Apart from replacing steam locomotives with diesel and electric locomotives in areas of heavy traffic density, a large number of diesel shunting engines are also being introduced as replacements for steam shunting locomotives. This has enabled Indian Railways to improve operational efficiency in both passenger and freight operations.

The traction mix has significantly changed in the last two decades and Railways have been progressively switching over to diesel and electric traction. Though steam locomotion involves the least initial costs, it is technologically inferior to diesel and electric traction in many respects. On the other hand, diesel and electric locomotives have superior performance capabilities, the electric locomotive being the more powerful one of the two. Electric traction is also the most capital intensive and, therefore, requires a certain minimum level of traffic density for its economic use. In broad terms, the traction policy on Indian Railways envisages the extension of the electrification of high-density routes as dictated by economic and resource considerations and the dieselization of the remaining services.

The passenger and freight traffic in the year 2003-04 in terms of train kilometres as well as gross tonne kilometres is given in Table 1.7.

Electric traction using 1500-V dc was first introduced in 1925 in a small section of the Mumbai area, and till 1957 it was confined to less than 466 km, comprising mainly the suburban sections of Mumbai and Chennai. Electrification on the main line sections was, however, taken up towards the end of the second Five Year Plan using a 25 kV, single-phase ac system.

The electrification of the Howrah-Burdwan suburban section of Kolkata on the Eastern Railway was taken up during the first Five Year Plan (1951-56) and completed in 1958. Thereafter, the electrification of Indian Railways has continued in a planned manner on the trunk routes connecting the four metropolitan cities of Kolkata, Delhi, Mumbai, and Chennai and other high-density routes.

The route length as on 31 March 2004 in each gauge, indicating double/multiple lines, single lines, and the electrified route, is given in Table 1.8: 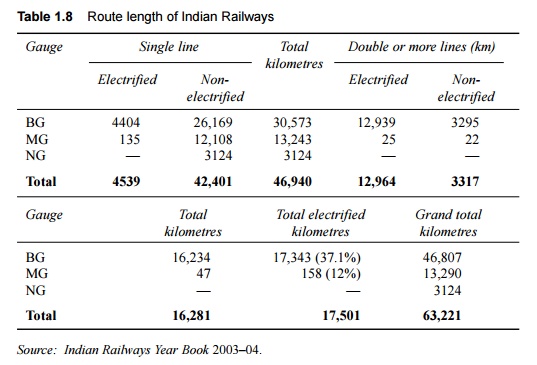 Diesel and electric locomotives are comparatively more efficient than steam locomotives. They provide greater hauling capacity, have better acceleration and deceleration, and are capable of higher speeds. They have less servicing needs, and, therefore, their availability for traffic is comparatively more. Thus, electrification and dieselization lead to considerable savings as well as improvement of line capacity.

Diesel traction started on the ex North Western Railway prior to the second world war with the introduction of diesel shunting engines. Diesel traction got off to a real start with the use of diesel locomotives on the newly laid MG line to Gandhidham in 1955-56. It progressed rapidly after the introduction of the BG main line locomotives in the heavy-density sections of the eastern region in 1958-59 to ensure speedy and adequate transportation of raw materials and finished product to and from steel plants. Diesel traction has subsequently been extended to other high-density routes and routes situated away from coalfields. Today, diesel electric traction is significant in the motive power scene in Indian Railways.

The fleet of the Indian Railways rolling stock is presented in Table 1.9.

Indian Railways is in the process of modernizing its rolling stock by inducting newer designs of fuel-efficient locomotives, high-speed coaches, and modern high-speed bogies for freight traffic. The Railways are also gradually replacing four-wheeler stock with bogie wagons that have a higher pay loads and speed potential for optimum utilization of line capacity. These include BCN, BTPN, BOXN wagons, etc.