1. Bipolar neurons are found in

(a) retina of eye

2. Site for processing of vision, hearing, memory, speech, intelligence and thought is

3. In reflex action, the reflex arc is formed by

b) towards, away from

d) away from, towards

5. The outer most of the three cranial meninges is

7. The neurons which carries impulse from the central nervous system to the muscle fibre.

8. Which nervous band connects the two cerebral hemispheres of brain?

9. Node of Ranvier is found in

10. Vomiting centre is located in

11. Nerve cells do not possess

12. A person who met with an accident lost control of body temperature, water balance, and hunger. Which of the following part of brain is supposed to be damaged?

1. Neuron is the longest cell in our body.

3. A change in the environment that causes an animal to react is called  stimulus.

4. Dendrite carries the impulse towards the cell body.

6. A neuron contains all cell organelles except centrioles

7. cerebro spinal fluid maintains the constant pressure inside the cranium.

8. sulci and  gyri increases the surface area of cerebrum.

9. The part of human brain which acts as relay center is  thalamus.

III. State whether true or false, if false write the correct statement

1. Dendrons are the longest fibres that conducts impulses away from the cell body. - False

Dendrone are the longest fibres and they conduct impulses towards cell body.

3. Hypothalamus is the thermoregulatory centre of human body. - True

4. Cerebrum controls the voluntary actions of our body. - False

Cerebellum controls the voluntary actions of our body.

6. All the nerves in the body are covered and protected by meninges. - False

The brain and spinal cord are covered and protected by meninges.

8. Reflex arc allows the rapid response of the body to a stimulus. - True 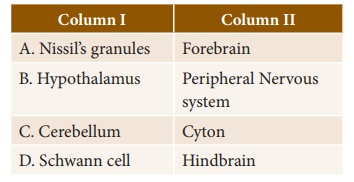 V. Understand the assertion statement. Justify the reason given and choose the correct choice

a. Assertion is correct and reason is wrong

b. Reason is correct and the assertion is wrong

c. Both assertion and reason are correct

d. Both assertion and reason are wrong

1. Assertion: Cerebrospinal fluid is present throughout the central nervous system.

Reason: Cerebrospinal fluid has no such functions.

Answer: a. Assertion is correct and reason is wrong

2. Assertion: Corpus callosum is present in space between the duramater and piamater.

Reason: It serves to maintain the constant intracranial pressure.

Answer: d. Both assertion and reason are wrong

‘Stimulus’ refers to the changes in the environmental condition, that are detected by receptors present in the body. Relevant changes in the activities of organisms to a particular stimuli are called their reactions or responses.

2. Name the parts of the hind brain.

It is formed of three parts cerebellum, pons and medulla oblongata.

3. What are the structures involved in the protection of brain?

The brain is covered by three connective tissue membranes or meninges:

It protects the brain from mechanical injury.

4. Give an example for conditioned reflexes.

Playing a harmonium by striking a particular key on seeing a music note is an example of conditioned reflex.

5. Which acts as a link between the nervous system and endocrine system?

Hypothalamus of the fore brain acts as a link between nervous and endocrine system.

1. Actions performed with our will and control are called voluntary actions.

2. They are controlled by the cerebellum.

1. Actions performed without our control are called involuntary actions.

2. They are controlled by the medulla and spinal cord.

1, The axon of the neuron is covered with myelin sheath.

2. It forms the white matter of the brain

1. The axon of the neuron is not covered with myelin sheath.

2. It forms the grey matter of the brain

1. With a neat labelled diagram explain the structure of a neuron. 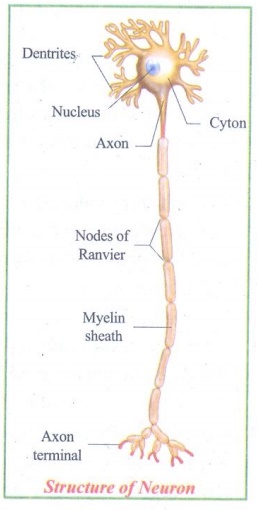 (a) Cyton is also called cell body or perikaryon. It has a central nucleus with abundant cytoplasm called neuroplasm.

(b) The cytoplasm has large granular body called Nissl’s granules and the other cell organelles like mitochondria, ribosomes, lysosomes, and endoplasmic recticulum.

(c) Neurons do not have the ability to divide.

(a) These are the numerous branched cytoplasmic processes that project from the surface of the cell body. They conduct nerve impulses towards the cyton.

(b) The branched projections increase the surface area for receiving the signals from other nerve cells.

(a) The axon is a single, elongated, slender projection. The end of axon terminates as fine branches which terminate into knob like swellings called synaptic knob.

(b) The plasma membrane of axon is called axolemma, while the cytoplasm is called axoplasm. It carries impulses away from the cyton.

(c) The axons may be covered by a protective sheath called myelin sheath which is further covered by a layer of Schwann cells called neurilemma.

(d) Myelin sheath breaks at intervals by depressions called Nodes of Ranvier. The region between the nodes is called as internode. Myelin sheath acts as insulator and ensures rapid transmission of nerve impulses.

(a) A junction between synaptic knob of axon of one neuron and dendron of next neuron is called synaptic junction.

(b) Information from one neuron can pass to another neuron through these junctions with the release of chemicals known as neurotransmitters from the synaptic knob.

2. Illustrate the structure and functions of brain.

A human brain is formed of three main parts:

(a) forebrain (b) midbrain and (c) hindbrain.

Forebrain : The forebrain is formed of cerebrum and diencephalon. The latter consists of dorsal thalamus and ventral hypothalamus. 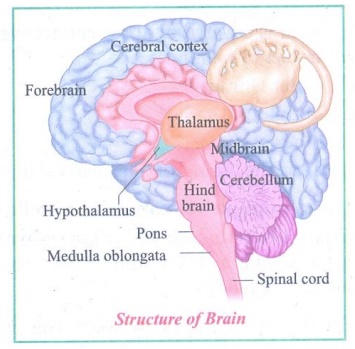 (i) It is the largest portion forming nearly two-third of the brain. The cerebrum is longitudinally divided into two halves called cerebral hemispheres by a deep cleft which are interconnected by thick band of nerve fibres called corpus callosum.

(iii) The cortex is extremely folded forming elevations called gyri with depressions between them termed as sulci that increase its surface area.

(iv) The cerebrum is also responsible for the thinking, intelligence, consciousness, memory, imagination, reasoning and willpower.

Thalamus : Thalamus present in cerebral medulla is a major conducting centre for sensory and motor signalling. It acts as a relay centre.

(i) It lies at the base of the thalamus.

(iii) It acts as a thermoregulatory (temperature control) center of the body.

(iv) It controls the secretion of hormones from anterior pituitary gland and is an important link between nervous system and endocrine system.

(i) It is located between thalamus and hind brain.

It is formed of three parts cerebellum, pons and medulla oblongata.

Pons : It is a bridge of nerve fibre that connects the lobes of cerebellum. It relay signals between the cerebellum, spinal cord, midbrain and cerebrum. It controls respiration and sleep cycle.

(i) Medulla oblongata is the posterior most part of the brain that connects spinal cord and various parts of brain.

3. What will you do if someone pricks your hand with a needle? Elucidate the pathway of response with a neat labelled diagram.

If some one pricks our hand with a needle, we will immediately pull our hand to protect ourselves. This is an example of a reflex action.

Reflex action : A reflex is any response that occurs automatically without consciousness. Most of the reflex actions are monitored and controlled by the spinal cord. Hence they are also known as spinal reflexes. 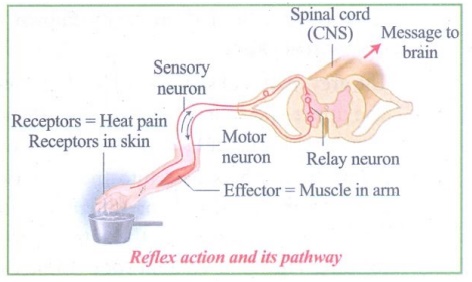 (i) When we are pricked by a needle, the stimulus is the prick which is sensed by receptors in our hand. This stimulus (pain) inturn triggers an impulse in sensory neuron.

(ii) The sensory neuron transmits or conveys the message to the spinal cord.

(iii) Spinal cord interprets the stimulus and the impulse is passed on to the relay neuron which inturn transmits it to a motor neuron.

(v) Muscle in our arm contracts and we withdraw our hand immediately from the needle.

In this example, muscle is an effector organ which has responded to the pain.

4. Describe the structure of spinal cord.

(i) Spinal cord is a cylindrical structure lying in the neural canal of the vertebral column. It is also covered by meninges. It extends from the lower end of medulla oblongata to the first lumbar vertebra.

(ii) The posterior most region of spinal cord tapers into a thin fibrous thread like structure called filum terminale.

(vi) The white matter is external and have bundle of nerve tracts.

(vii) Spinal cord conducts sensory and motor impulses to and from the brain. It controls reflex actions of the body.

5. How nerve impulses are transferred from one neuron to next neuron?

(i) All the information from the environment are detected by the receptors located in our sense organs such as the eyes, the nose, the skin etc.

(ii) Information from the receptors is transmitted as electrical impulse and is received by the dendritic tips of the neuron.

(iii) This impulse travels from the dendrite to the cell body and then along the axon to its terminal end.

(iv) On reaching the axonal end, it causes the nerve endings to release a chemical (neurotransmitter) which diffuses across a synapse and starts a similar electrical impulse in the dendrites of the next neuron, then to their cell body to be carried along the axon.

(v) In this way, the electrical signal reaches the brain or spinal cord.

(vi) The response from brain (or spinal cord) is similarly passed on to the effector organs such as the muscle or gland cell, that undergoes the desired response.

(vii) The flow of nerve impulses from axonal end of one neuron to dendrite of another neuron through a synapse is called synaptic transmission.

(viii) Neurotransmitters : Neurotransmitters are the chemicals which allow the transmission of nerve impulse from the axon terminal of one neuron to the dendron of another neuron or to an effector organ. The important neurotransmitter released by neurons is called Acetylcholine. 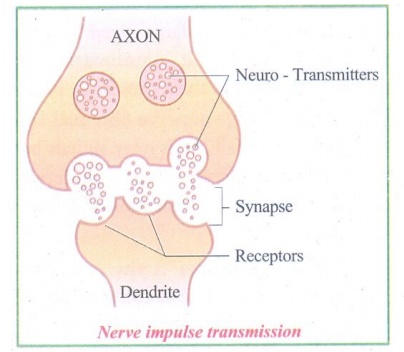 6. Classify neurons based on its structure.

The neurons may be of different types based on their structure and functions. 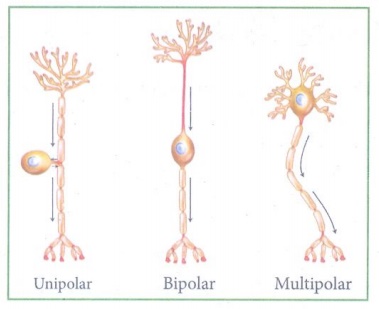 Structurally the neurons may be of the following types:

(i) Unipolar neurons : Only one nerve process arises from the cyton which actsas both axon and dendron.

(ii) Bipolar neurons : The cyton gives rise to two nerve processes of which one acts as an axon while another as a dendron.

(iii) Multipolar neurons : The cyton gives rise to many dendrons and an axon.

Types of Nerve Fibres : Nerve fibres are of two types based on the presence or absence of myelin sheath.

(i) Myelinated nerve fibre : The axon is covered with myelin sheath

(ii) Non-myelinated nerve fibre : The axon is not covered by myelin sheath.

Myelinated and non-myelinated nerve fibres form the white matter and grey matter of the brain.

1. ‘A’ is a cylindrical structure that begins from the lower end of medulla and extend downwards. It is enclosed in bony cage ‘B’ and covered by membranes ‘C’. As many as ‘D’ pairs of nerves arise from the structure ‘A’.

(i) A refers to the spinal cord.

(ii) (a) Bony cage 'B' refers to the vertebral column.

2. Our body contains a large number of cells ‘L’ which are the longest cells in the body. L has long and short branch called as ‘M’ and ‘N’ respectively. There is a gap ‘O’ between two ‘L’ cells, through which nerve impulse transfer by release of chemical substance ‘P’.

(i) Name the cells L