A potential of V volts at point B with respect to point A, is defined as the work done in taking unit positive charge from A to B , against the electric field.

It is defined as the current per unit area of the conducting medium. J = I / A

The number of protons or electrons in an atom is atomic number.

Electron in the outermost shell of an atom is called valence electron.

The space between the valence and conduction band is said to be forbidden energy gap.

Conductors are materials in which the valence and conduction band overlap each other so there is a swift movement of electrons which leads to conduction. Ex: Copper, silver.

9.  What are insulators? Give examples?

Insulators are materials in which the valence and conduction band are far away from each other. So no movement of free electrons and thus no conduction. Ex glass, plastic.

The materials whose electrical property lies between those of conductors and insulators are known as Semiconductors. Ex germanium, silicon.

In Insulators there is a wide forbidden energy gap. So movement of valence electron from valence to conduction band is not possible. 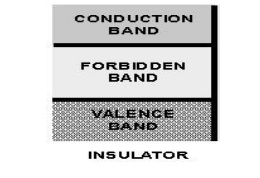 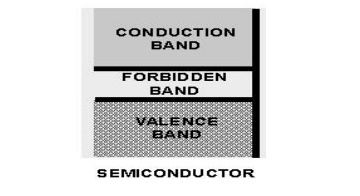 In Semiconductors th ere is a small forbidden energy gap. So movement of valence electron from valence to conduction band is possible if the valence electrons are supplied with some energy.

In conductors there i s no forbidden energy gap, valence band and conduction and overlap each other. so there is a heavy movement of valence electrons. 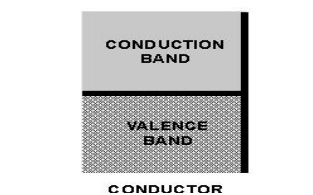 Pure form of semiconnductors are said to be intrinsic semiconductor. Ex: germanium, silicon.

If certain amount of i mpurity atom is added to intrinsic semiconduuctor the resulting semiconductor is Extrinsic or impure Semiconductor.

Under thermal equili brium the product of free electron concentr ation (n) and hole concentration (p) is constant regardless of the individual magnitude.

The Semiconductor which are obtained by introducing pentavalent impurity atom (phosphorous, antimony) are known as P-type Semiconductor.

Process of adding impurity to a intrinsic semiconductor atom is doping. The impurity is called dopant.

n- type impurities will donate the excess negative charge carriers ( Electrons) and therefore they are reffered to as donor impurities.

25. Why P – type or trivalent impurities are called as acceptor impurity?

p- type impurities make available positive carriers because they create holes which can accept electron, so these impurities are said to be as acceptor impurity.

26. Give the energy band structure of n- type semiconductor. 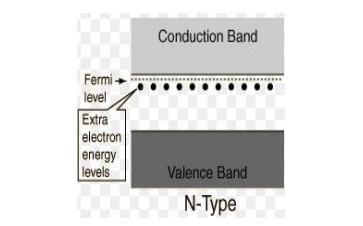 28. Give the energy band structure of P- type semiconductor. 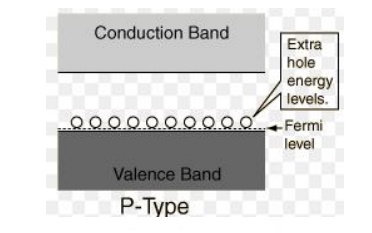 29. Give the expression for the Fermi level energy in n – type semiconductor.

30. Give the expression for drift current density=µ due to electron.

31. Give the expression for drift current density=µdue to holes.

33. Give the expression for diffusion current= density due to electron.

q - Charge of an electron

34. Give the expression for diffusion current = density due to holes.

q - Charge of a hole Dp – diffusion constant for hole

If a metal or semiconductor carrying current I is placed in a transverse magnetic field B , an electric field E is induced in the direction perpendicular to both I and B , This phenomenon is known as Hall effect.

The region around the junction from which the mobile charge carriers ( electrons and holes) are depleted is called as depletion region.since this region has immobile ions, which are electrically charged , the depletion region is also known as space charge region.

Because of the oppositely charged ions present on both sides of PN junction an electric potential is established across the junction even without any external voltage source which is termed as barrier potential.

Because of the oppositely charged ions present on both sides of PN junction an electric potential is established across the junction even without any external voltage source which is termed as barrier potential.

When positive terminal of the external supply is connected to P region and negative terminal to N region ,the PN junction is said to be forward biased. under forward biased condition the PN region offers a very low resistance and a large amount of current flows through it.

When positive terminal of the external supply is connected to N type and negative terminal to P type then the PN junction is said to be in reverse bias. Under reverse biased condition the PN region offers a very high resistance and a small amount of current flows through it.

The current due to the minority carriers in reverse bias is said to be reverse saturation current. This current is independent of the value of the reverse bias voltage.

45.Why a contact difference of potential exist in PN junction?

When a pn junction is formed by placing a p-type and n-type material in intimate contact, the Fermi level throughout the newly formed specimen is not constant at equilibrium. There will be transfer of electron and energy until Fermi levels in the two side did line up. But the valence and conduction band in pside cannot be at the at the same level as in n side .this shift in energy level results in contact difference of potential.

47. Give the diode current equation?

The diode current equation relating =the voltage V and−1current I is given by I – diode current, Io – diode reverse saturation current at room temperature

V – External voltage applied to the diode, η - a constant, 1 for Ge and 2 for Si

T – Temperature of the diode junction

It is a stable elementary particle with a charge of negative electricity, found in all atoms and acting as the primary carrier of electricity in solids.

·        Electronics is the movement of electrons in a vacuum, gas, semiconductor, etc., in devices in which the flow is controlled and utilized.

·        Components are generally intended to be connected together, usually by being soldered to a printed circuit board (PCB), to create an electronic circuit with a particular function (for example an amplifier, radio receiver, or oscillator). Components may be packaged singly, or in more complex groups as integrated circuits.

Circuits and components can be divided into two groups: Analog and Digital. A particular device may consist of circuitry that has one or the other or a mix of the two types.

Analog circuits are constructed from combinations of a few types of basic circuits. Analog circuits use a continuous range of voltage as opposed to discrete levels as in digital circuits. The number of different analog circuits so far devised is huge, especially because a 'circuit' can be defined as anything from a single component, to systems containing thousands of components.