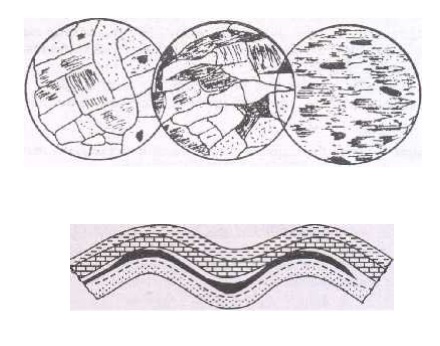 Rocks that have formed from an originally hot molten material through the process of cooling and crystallization may be defined as igneous rocks.

Ř                       Rocks that have formed from an originally hot molten material through the process of cooling and crystallization may be defined as igneous rocks.

Important Conditions For The Original Material

1 The hot molten material occurring naturally below the surface of the Earth is called magma.

2 It is called lava when erupted through volcanoes.

3 Igneous rocks are formed both from magma and lava.

4 It maybe mentioned here that magma is actually a hypothetical melt.

5 Lava is a thoroughly studied material that has poured out occasionally from volcanoes in many regions of the world again and again.

6 Magma or lava from which igneous rocks are formed may not be entirely a pure melt: it may have a crystalline or solid fraction and also a gaseous fraction thoroughly mixed with

7 The solid and gaseous fractions, however, form only a small part of the magma or lava, which are predominantly made up of liquid material igneous rock.

Ř        These are the igneous rocks formed on the surface of the Earth by cooling and crystallisation of lava erupted from volcanoes.

Ř    Since the lava cools down at very fast rate (compared to magma), the grain size of the crystals formed in these rocks is very fine, often microscopic.

Further, cooling of lava may take place on the surface or even under waters of seas and oceans, the latter process being more common.

Ř              These are igneous rocks formed at considerable depths-generally between 7-10 km below the surface of the earth.

Ř              Because of a very slow rate of cooling at these depths, the rocks resulting from magma are coarse grained.

Ř            These rocks get exposed on the surface of the earth as a consequence of erosion of the overlying strata.

Ř               These igneous rocks are formed at intermediate depths, generally up to 2 kms below the surface of the earth and exhibit mixed characteristics of volcanic and plutonic rocks.

Ř            Porphyries of various compositions are examples of hypabyssal rocks.

Ř Igneous rocks like other rock groups are characterised by the abundance of only a few, minerals.

(ii) Holohyaline: When all the constituents are very fine in size and glassy or non crystalline in nature.

Ř       The term merocrystalline is commonly used to express the intermediate type, i.e. when some minerals are crystallized and others are of glassy character in the same rock.

are referred as aphinitic. The term microcrystalline is used for the textures in which the minerals are perceivably crystallized but in extremely fine grain.

(i)           Coarse-grained. When the average grain size is above 5 mm; the constituent minerals

are then easily identified with naked eye.

(ii)                   Medium-grained. When the average grain size lies between 5 mm and 1 mm. Use of magnifying lens often becomes necessary for identifying ail the constituent mineral components.

(iii) Fine-grained. When the average grain size is less than 1 mm. In such rocks, identification of the constituent mineral grains is possible only with the help of microscope for which very thin rock sections have to be prepared for microscopic studies

Ř     This is a composite term expressing the relative grain size of different mineral constituents in a rock as well as the degree of perfection in the form of the crystals of the individual minerals.

Ř     The texture is termed as equigranular when all the component minerals are of approximately equal dimensions and as inequigranular when some minerals in the rock are exceptionally larger or smaller than the other.

Ř  Similarly, the shape or form of the crystals, which is best seen only in thin sections under microscope, may be described as perfect, semi perfect or totally irregular. The textural terms to describe these shapes are, respectively, euhedral, subhedral and anhedral.

hence its fabric will be defined by one of the following three terms related to fabric:

These can be broadly divided into five categories:

Ř              All those textures in which majority of constituent crystals of a rock are broadly equal in size are described as equigranular textures.

Ř             In igneous rocks, these textures are shown by granites and felsites and hence are also often named as granitic and felsitic textures

medium grained and the crystals show euhedral to subhedral outlines.

Ř                    In the felsitic texture, the rock is micro granular, the grains being mostly microscopic crystals but these invariably show perfect outlines.

Orthophyric texture is another type of equigranular texture, which is in between

the granitic and felsitic textures. The individual grains are fine in size but not micregranular.

Ř                Igneous textures in which the majority of constituent minerals show marked difference in their relative grain size are grouped as inequigranular texture.

Ř             Porphyritic and Poiklitic textures are important examples of such textures.

(the phenocrysts) which are embedded in a fine-grained ground mass or matrix.

Ř              The texture is sometimes further distinguished into mega-porphyritic and microporphyritic depending upon the size of the phenocrysts.

Ř When the magma is rich in molecules of particular mineral, the latter has better chance to grow into big crystals which may get embedded in the fine-grained mass resulting from the deficient components.

Ř And the soluble constituents make up the ground mass crystallizing towards the end.

are known as directive textures.

Ř     These exhibit perfect or semi perfect parallelism of crystals or crystallites in the direction of the flow of magma.

Ř     The former is characteristic of certain felspathic lavas and is recognised by a parallel arrangement of felspar crystals; the latter is found in some syenites.

Ř                 During the formation of the igneous rocks, sometimes two or more minerals may crystallize out simultaneously in a limited space so that the resulting crystals are mixed up or intergrown.

Ř               This type of mutual arrangement is expressed by the term intergrowth texture.

Ř               Graphic and granophyric textures are examples of the intergrowth textures.

Ř     In certain igneous rocks crystals formed at earlier stages may get so arranged that polygonal or trigonal spaces are left in between them.

masses of other minerals.

Ř The texture so produced is called an intergranular texture. Sometimes the texture is specifically termed intersertal if the material filling the spaces is glassy in nature.

It is possible to divide the various forms of igneous intrusions into two broad classes:

All those intrusions in which the magma has been injected and cooled along or parallel to the structural planes of the host rocks are grouped as concordant bodies.

grain size than their interior portions. This is explained by relatively faster cooling of magmatic injection at

Ř In length, sills may vary from a few centimeters to hundreds of meters

(d)                   Differentiated Sills: these are exceptionally large, sheet-like injections of magma in which there has been segregation of minerals formed at various stages of crystallisation into separate layers or zones.

(e)Interformational Sheets: the sheet of magma injected along or in between the planes of unconformity in a sequence are specially termed as interformational sheets. These resemble the sills in all other general details.

Ř                 These arecordant, small sized intrusive that occupy positions in the troughs and crests of bends called folds. In outline, these bodies are doubly convex and appear crescents or half-moon shaped in cross-section.

Ř                  As regards their origin, it is thought that when magma is injected into a folded sequence of rocks, it passes to the crests and troughs almost passively i.e. without exerting much pressure.

Instead, it gets collected in the form of a heap about the orifice of eruption. As the magma is injected with sufficient pressure, it makes room for itself by arching up the overlying strata.

Ř                        Extreme types of laccoliths are called bysmaliths and in these the overlying strata get ultimately fractured at the top of the dome because of continuous injections from below.

Ř               Those igneous intrusions, which are associated with structural basins, that are sedimentary beds inclined towards a common centre, are termed as lopoliths.

Ř              It is believed that in the origin of the lopoliths, the formation of structural basin and the injection of magma are "contemporaneous", that is, broadly simultaneous.

Ř All those intrusive bodies that have been injected into the strata without being influenced by their structural disposition (dip and strike) and thus traverse across or oblique to the bedding planes etc. are grouped as discordant bodies.

Ř These may be defined as columnar bodies of igneous rocks that cut across the bedding plane or unconformities or cleavage planes and similar structures.

Ř Dykes are formed by the intrusion of magma into pre-existing fractures.

Ř It depends on the nature of magma and the character of the invaded rock whether the walls of the fracture are pushed apart, that is, it is widened or not.

Ř              In composition, dykes are generally made up of hypabyssal rocks like dolerites, porphyries and lamprophyres, showing all textures between glassy and phaneritic types.

Ř            Cone sheets and Ring Dykes may be considered as the special types of dykes.

Ř                The cone sheets are defined as assemblages of dyke-like injections, which are generally inclined towards common centres.

Ř             These may be arranged in concentric series, each separated from the other by a screen of country rock.

They show a great variation in their diameter; their average diameter is around 7 kilometers. Few ring dykes with diameters ranging up to 25 kms are also known.

Ř                    Origin of dykes It has been already mentioned that dykes are intrusions of magma into pre- existing fractures present in the rocks of the crust.

Ř                   This indicates widening of the cracks under the hydrostatic pressure of magmatic injection.

Ř                In outline these masses may be circular, semicircular, or irregular and show considerable variation in their diameter. The country rock generally shows an inwardly dipping contact.

Ř  These are huge bodies of igneous masses that show both concordant and discordant relations with the country rock.

traceable. This is typical of batholiths: they show extensive downward enlargement