Learning Objectives - Students will be able to: * describe the features of Hydrosphere. * define each type of water body. * list the steps to be taken to conserve water. * explain the steps involved in the water cycle. 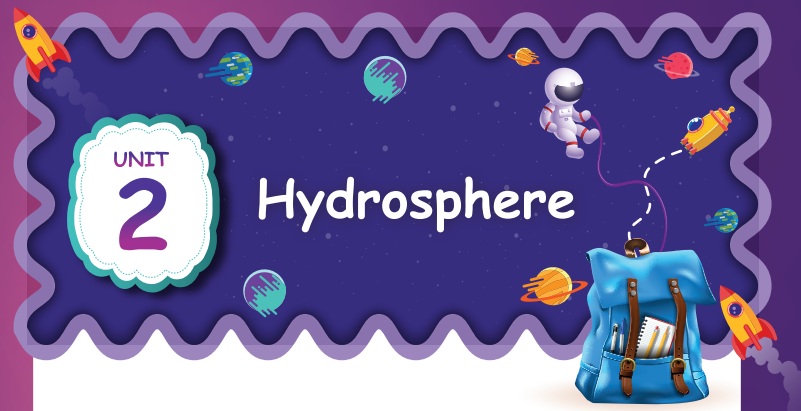 * describe the features of Hydrosphere.

* define each type of water body.

* list the steps to be taken to conserve water.

* explain the steps involved in the water cycle.

Rani: Sundar! Our earth is huge, isn’t it?

Sundar: Yes Rani. It is huge. Do you know what does it consist of?

Sundar: Sure! The earth consists of Lithosphere, Hydrosphere and Atmosphere.

Rani: Oh! Such big words! What does this mean?

Sundar: This means that the earth consists of land, water bodies and air.

Sundar: When we went to the Marina Beach, have you noticed how much water in the sea! The water from oceans, seas and so on become a part of the hydrosphere.

Rani: Wow! Can you tell me more about hydrosphere, Sundar?

Hydrosphere covers about 71% of the planet Earth. This includes water in liquid and frozen forms. 97% is salt water and rest of the 3% water is found in ground, lakes, rivers and also frozen as ice in the form of glaciers and icebergs. 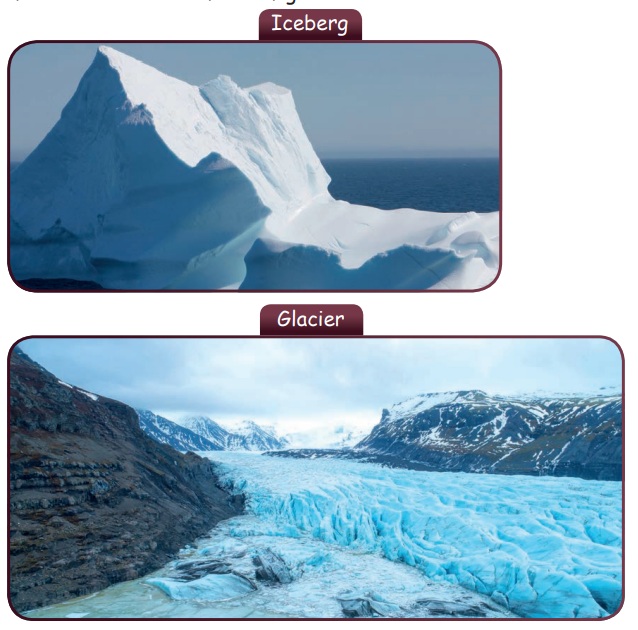 There is no aquatic life in Dead Sea because it is too salty.

What other water sources can be a part of the Hydrosphere?

Construct Rain Water Harvest system at your school with the help of your teachers.

We need water to carry out many activities in our daily lives. We need water to drink, take bath, cook food etc. Animals and plants also need water for their survival. If there is no water, it cannot evaporate and form clouds. So there will not be any rain. 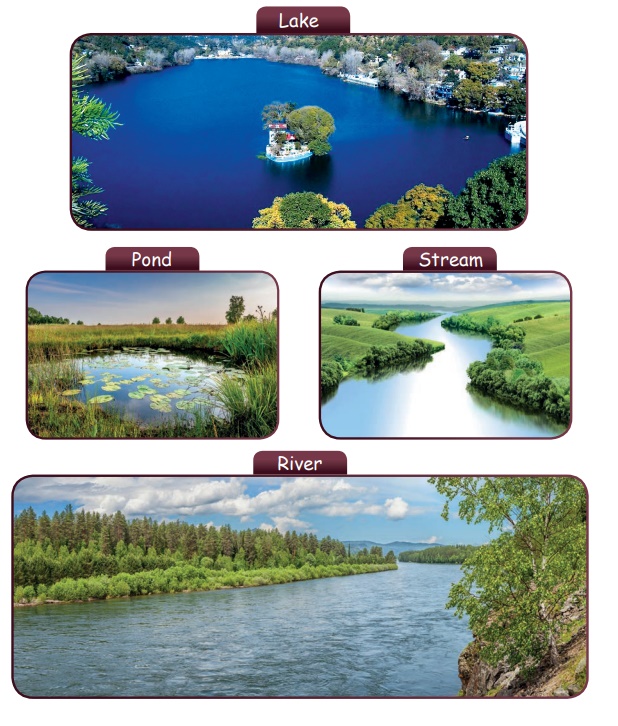 Oceans are vast water bodies that usually separate continents from one another. The water is salty in nature. There are five oceans on earth. They are: the Pacific Ocean, Atlantic Ocean, Indian Ocean, Southern Ocean, and Arctic Ocean. 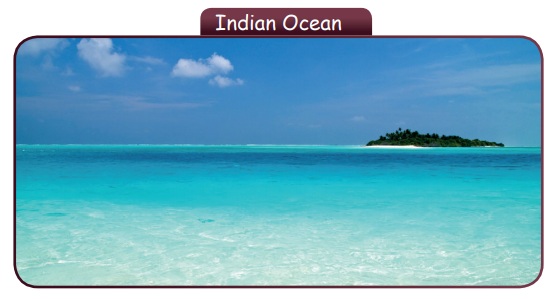 Seas are also vast water bodies but smaller than oceans in size. They are partly closed by land and opens up to the ocean. Sea water is salty in nature. 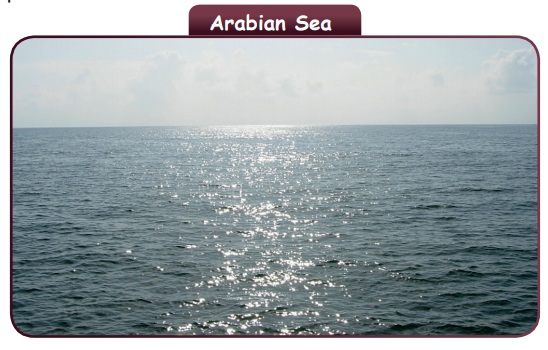 It is incredible that a wide variety of earth’s living organisms exist within the oceans.

Some of the longest flowing rivers in India are the Ganges, Yamuna, Godavari, Krishna and Cauvery.

Describe a water body that you have visited. River/ lake/ waterfall/ sea etc.

Rivers are large streams that flow over the land. Rivers are fresh water bodies which generally begin at mountainous areas. They usually drain in oceans or seas.

A lake is a water body surrounded by land on all sides. Lakes  can have salt or fresh water.

A gulf  is a large area of an ocean or a sea that is surrounded by land.

A bay is a body of water, which is partially enclosed by land.  It has a wide mouthed opening of land, and is joined to the sea or other large water bodies.

Name some water bodies in your locality?

A stretch of salt water separated from the sea by a low sand bank.

A strait is a narrow stretch of water which joins two larger water bodies.

Example: Palk Strait joining the Bay of Bengal and the Indian Ocean. 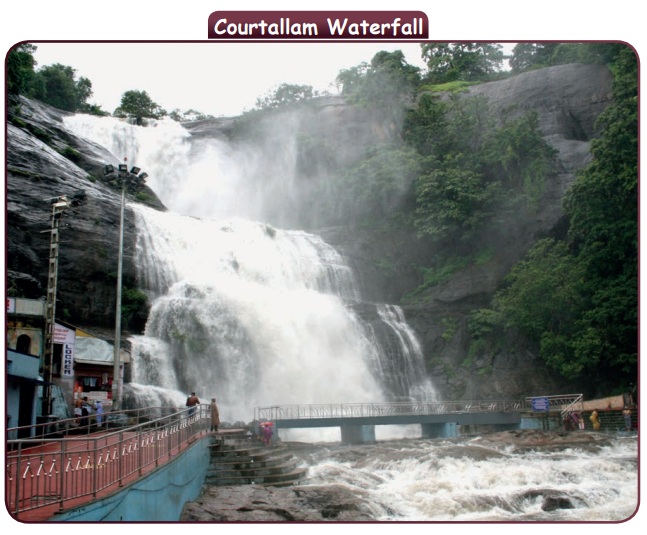 We should be very careful about how we use the water. We have the choice to conserve water resources or pollute them further. Water pollution is a common phenomenon around us. We throw garbage, join sewage to rivers and so on, making river water contaminated and not fit for use. This, increases the scarcity of water for household use. 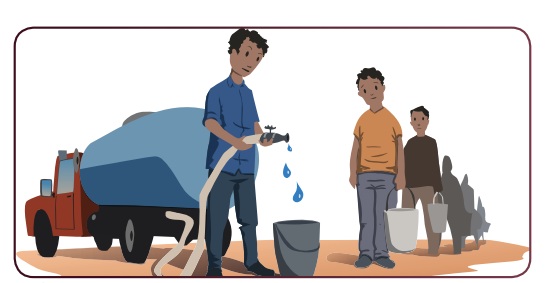 Sundar: Yes, We faced it too Rani. The whole of Tamil Nadu faced a huge water crisis.

Rani: You are right. I think we should come up with step to use water thoughtfully. 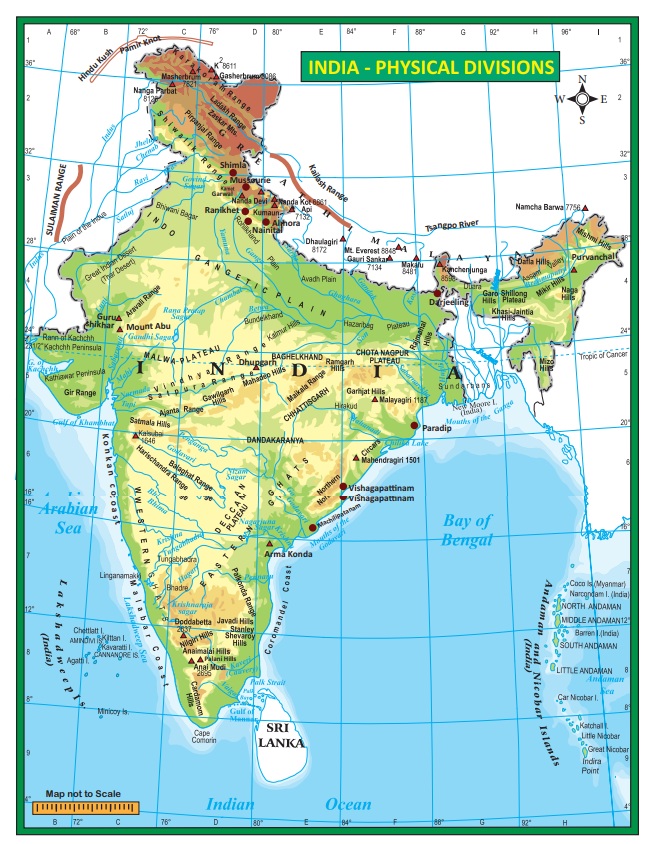 Children you can easily do these.

* Take water in a bucket for bathing instead of using shower.

* After washing vessels check if the taps are closed.

Can you help Rani to come up with more steps?

How can we save water?

Do not put plastic garbage when you go near beaches. It is very dangerous for the aquatic life.

Sundar: Rani, Do you know that water continuously moves on, below and above the surface of the earth?

Sundar: There is a water cycle that occurs continuously. Water changes its state from solid, liquid, gas in this cycle.

The stages involved in a complete water cycle are:

Stage I: Evaporation - The heat of the sun falls on the water bodies like oceans, seas, lakes, rivers etc. The water slowly evaporates as vapours into the air.

Stage II: Condensation - As the vapours rise high, the cooler temperatures make them cool down and turn back into liquid. This is called condensation. Wind moves the liquid around, leading to the formation of clouds.

Stage III: Precipitation - Wind movements cause the clouds particles to collide. They become rain bearing clouds and fall back onto the earth’s surface by the process known as precipitation. This may occur in the form of rain, hail, snow or dew depending upon the temperature conditions.

Stage IV: Runoff and Infiltration - The water either runs off into oceans, rivers and ground surface or is absorbed into the soil (infiltration). This cycle continues.

Evaporate: The process by which liquid becomes gas.

* Earth is made up of land, water and air.

* Water is necessary for all life forms.

* 3% of water is found in ground, lakes, ponds, streams and rivers .

* There are five major oceans in the world: The Pacific, Atlantic, Indian, Southern and Artic ocean.

* We should use water carefully.