How is correct positioning of the double-lumen endobronchial tube assessed?

Correct placement of the endobronchial tube must be confirmed immediately after intubation and after turning the patient into the lateral decubitus position.

How is correct positioning of the double-lumen endobronchial tube assessed?

Correct placement of the endobronchial tube must be confirmed immediately after intubation and after turning the patient into the lateral decubitus position. The patient’s lungs are initially ventilated through both lumens with the tracheal cuff inflated. Bilateral breath sounds, bilateral chest excursion, and bilateral fogging of endobronchial tube lumens should be present. Gas should not leak around the cuff. The capnogram should be examined for excretion of CO2. Successful response to these maneuvers ensures that the distal end of the tracheal lumen is in the trachea and is above the carina. Unilateral breath sounds and chest movement indicate that the tube has been inserted too far, and the tracheal lumen is in the bronchus, ipsilateral to the side on which breath sounds are present. In this case, the tracheal cuff should be deflated and the tube withdrawn until bilateral ventilation is established. 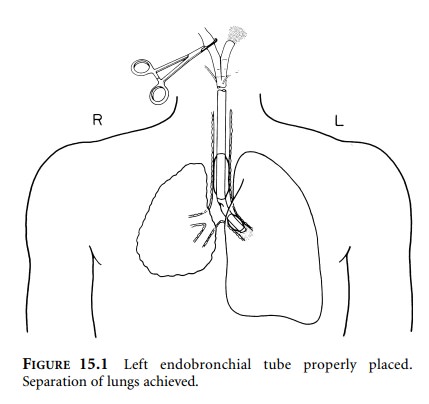 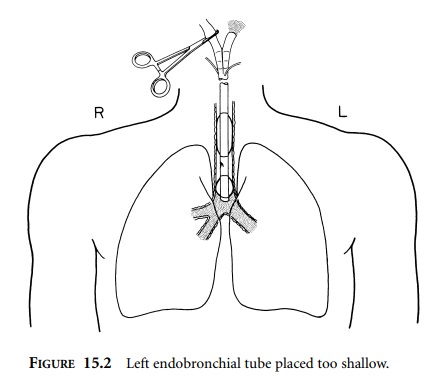 Next, the bronchial balloon is inflated with less than 2 mL of air (Figure 15.1). The tracheal lumen is clamped and the access cap opened. Ventilation should result in chest movement and breath sounds on the endobronchial side. The presence of bilateral breath sounds and chest movement indicates that the bronchial lumen’s orifice is proximal to the carina (Figure 15.2). Unilateral breath sounds and chest movement of the side opposite the bronchus intended for intubation indicate that the tube has been placed in the wrong side (Figure 15.3). If this has happened, both cuffs should be deflated and the tube with-drawn to a point where the distal end of the endobronchial tube is in the trachea. The tube is then rotated and advanced again until there is resistance to further movement. An alternative method is to insert a fiberscope through the bronchial lumen, visualize the carina, pass the fiberscope down the bronchus intended for intubation, and then slide the tube distally using the fiberscope as a guide until resist-ance is met. If the trachea was easy to intubate, instead of remanipulating the tube within the patient, the tube can be removed from the patient entirely, and the procedure repeated. A right-sided tube will almost always go to the right side, but a left-sided tube will sometimes pass to the right side. A left-sided tube should not be allowed to remain in the right side, because there is no opening for the right upper lobe bronchus on a left-sided tube. Rotating the patient’s head to the right, as is performed for left endobronchial rigid bronchoscopy, may facilitate passage of the tube to the left side. 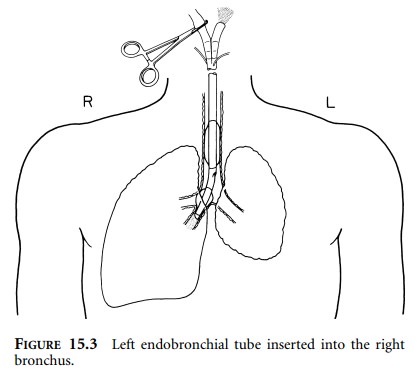 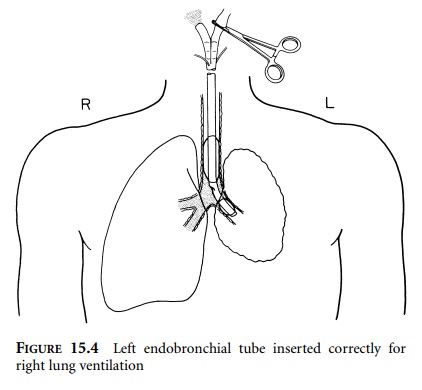 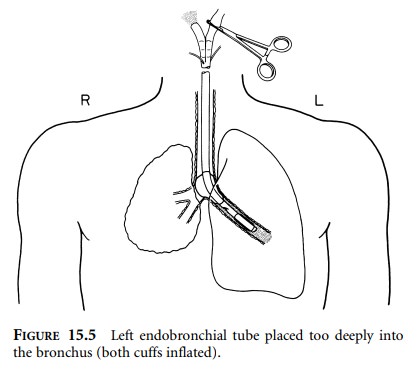 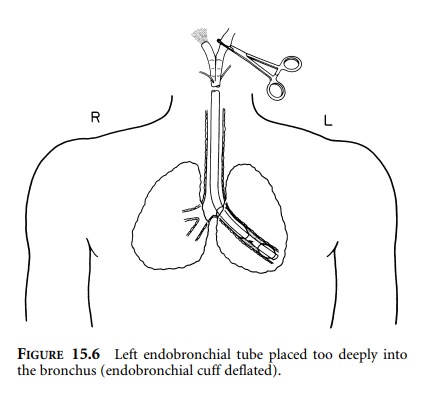 The precise positioning of the tube can be evaluated with the use of a flexible fiberoptic bronchoscope. Passage down the tracheal lumen should reveal the carina and just the proximal tip of the blue cuff of the bronchial lumen at the entrance to the mainstem bronchus. 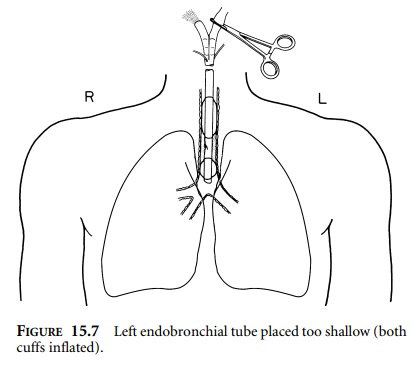 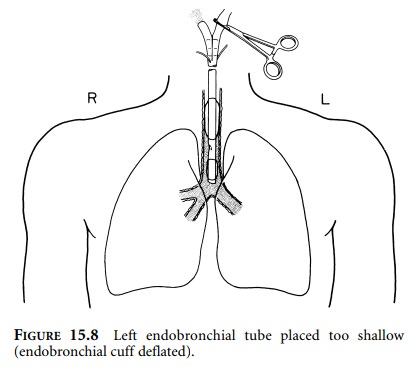