The history of highway enginnering gives us an idea about the roads of ancient times. Roads in Rome were constructed in a large scale and it radiated in many directions helping them in military operations.

The history of highway enginnering gives us an idea about the roads of ancient times. Roads in Rome were constructed in a large scale and it radiated in many directions helping them in military operations. Thus they are considered to be pioneers in road construction. In this section we will see in detail about Ancient roads, Roman roads, British roads, French roads etc.

The first mode of transport was by foot. These human pathways would have been developed for specific purposes leading to camp sites, food, streams for drinking water etc. The next major mode of transport was the use of animals for transporting both men and materials. Since these loaded animals required more horizontal and vertical clearances than the walking man, track ways emerged. The invention of wheel in Mesopotamian civilization led to the development of animal drawn vehicles. Then it became necessary that the road surface should be capable of carrying greater loads. Thus roads with harder surfaces emerged. To provide adequate strength to carry the wheels, the new ways tended to follow the sunny drier side of a path. These have led to the development of foot-paths. After the invention of wheel, animal drawn vehicles were

developed and the need for hard surface road emerged. Traces of such hard roads were obtained from various ancient civilization dated as old as 3500 BC. The earliest authentic record of road was found from Assyrian empire constructed about 1900 BC.

The earliest large scale road construction is attributed to Romans who constructed an extensive system of roads radiating in many directions from Rome. They were a remarkable achievement and provided travel times across Europe, Asia minor, and north Africa. Romans recognized that the fundamentals of good road construction were to provide good drainage, good material and good workmanship. Their roads were very durable, and some are still existing. Roman roads were always constructed on a firm

formed subgrade strengthened where necessary with wooden piles. The roads were bordered on both sides by longitudinal drains. The next step was the construction of the agger. This was a raised formation up to a 1 meter high and 15 m wide and was constructed with materials excavated during the side drain construction. This was then topped with a sand leveling course. The agger contributed greatly to moisture control in the pavement. The pavement structure on the top of the agger varied greatly. In the case of heavy traffic, a surface course of large 250 mm thick hexagonal flag stones were provided. A typical cross section of roman road The main features of the Roman roads are that they were built straight regardless of gradient and used heavy foundation stones at the bottom. They mixed lime and volcanic puzzolana to make mortar and they added gravel to this mortar to make concrete. Thus concrete was a major Roman road making innovation.

The next major development in the road construction occurred during the regime of Napoleon. The significant contributions were given by Tresaguet in 1764 and a typical cross section of this road. He developed a cheaper method of construction than the lavish and locally unsuccessful revival of Roman practice. The pavement used 200 mm pieces of quarried stone of a more compact form and shaped such that they had at least one flat side which was placed on a compact formation.

Smaller pieces of broken stones were then compacted into the spaces between larger stones to provide a level surface. Finally the running layer was made with a layer of 25 mm sized broken stone. All this structure was placed in a trench in order to keep the running surface level with the surrounding country side. This created major drainage problems which were counteracted by making the surface as impervious as possible, cambering the surface and providing deep side ditches.

He gave much importance for drainage. He also enunciated the necessity for continuous organized maintenance, instead of intermittent repairs if the roads were to be kept usable all times. For this he divided the roads between villages into sections of such length that an entire road could be covered by maintenance men living nearby.

The British government also gave importance to road construction. The British engineer John Macadam introduced what can be considered as the first scientific road construction method. Stone size was an important element of Macadam recipe. By empirical observation of many roads. 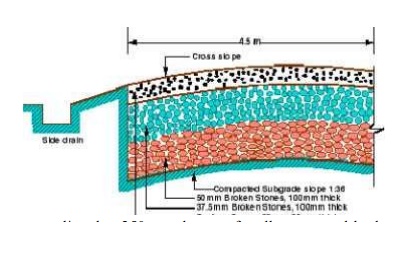 he came to realize that 250 mm layers of well compacted broken angular stone would provide the same strength and stiffness and a better running surface than an expensive pavement founded on large stone blocks. Thus he introduced an economical method of road construction.

The mechanical interlock between the individual stone pieces provided strength and stiffness to the course. But the inter particle friction abraded the sharp interlocking faces and partly destroy the effectiveness of the course. This effect was overcome by introducing good quality interstitial finer material to produce a well-graded mix. Such mixes also proved less permeable and easier to compact.